Famines and earthquakes in Gujarat during the British Raj have played a crucial role in the fate of the Khoja community and their travels across the globe and should be noted.

During the Raj, the effects of the famines were more pronounced as the colonial export system continued to send food out of India, even as the impoverished peasants died of starvation. The Indian railways' grid was also geared toward exports, so when drought hit, the distribution of food to the affected areas was wholly inadequate.

"An 1878 study published in the Journal of the Statistical Society found that there were 31 serious famines in 120 years of British rule compared to 17 famines in 2000 years of Indian rule. And that doesn't even count two more major famines, in 1888 and in the late 1890s." (1)

Major famines that forced large-scale emigration of the Khojas from Kutch & Kathiawar prior to 1905.

1791-1792 - The Skull Famine left 11 million dead in Northern India, including Gujarat and likely lead to the early movement of Khojas to the Bombay Presidency.

1819 Earth Quake in Kutch- This major catastrophe lead to the migration of Kutchi Khojas to Karachi and Kathiawad.

1876-1878 - The Great Famine hit hard in both Kutch & Kathiawar and likely forced the Khojas to brave the Kala Pani black waters to East Africa. 10 million Indians are reputed to have died at that time.

1899-1901 - The Indian Famine also called the "Chappanyo" by the Khojas, was most severe in Gujarat. "The progressive prosperity of Kathiawar received a shock from the famine of 1899–1900, which was felt everywhere in the area with extreme severity; between 1891 and 1901, the population of the states covered by the (Kathiawar) Agency decreased by 15 percent, largely due to the results of the famine. 2 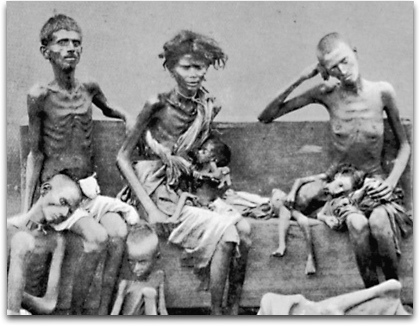 Many Khoja families took advantage of their now-strong connections to East Africa. It is reported that hundreds made their way through the Port of Porbander. The community even built a mussafarkhana at Porbandar for the influx of families for those traveling. See Alladina Giga Patney for such an account

The community leaders as well as East African pioneers such as Sir Taria Topan and Varas Alidina Visram made trips to India to persuade their relatives and friends to take advantage of the opportunities opening up through the development of the East African economy It was during this famine that another 1,500 Khojas went to Bombay from Junagadh and Ahmedabad( See story of Ahmed Devji for his help to bring them to Bombay.

1. Jill Richardson : How the British Empire Starved Millions of Indians - And Why It Is Still Important Today. Famine in Pre-British India

And Also An Explanatory Note on Famines in India -Jabudveep's blog

3. Listen to Shashi Tharoor recount the British policies that led to the famines.