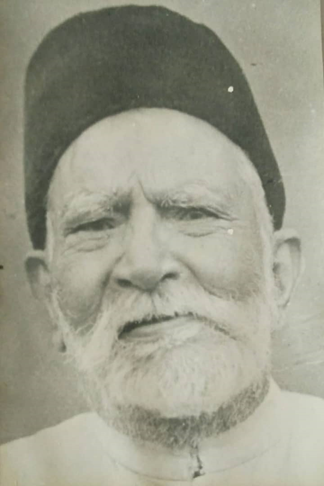 Haji Mohammedbhai Khaki was a legend by himself.

A man with charisma and principles - Marhum was born in Mundra, Kutch, India in 1870. He spent his childhood in Zanzibar and Somalia and then returned to Mumbai.

Whilst in Mumbai Chacha had a mishap and injured his jawbone. This serious injury left him in constant pain and he had to resort to frequent medications. It was then that he declared a vow that if cured he will proceed on the pilgrimage of 14 Masumeen (AS) on foot.

With the grace of AImighty, he was fully cured and he embarked on his journey which would take him many months and endure great difficulties. It was in 1900 or I905 - he with 10 of his companions left on this spiritual journey by foot. With only 30 Rupees in his pocket he left Mumbai for Karachi and then to Zahedan, Mashad and Tehran in Iran. He then travelled to Kadhmain, Kerbala, Najaf and Samarrah in Iraq , Syria and finally to the holy cities of Makkah and Madinah. This entire journey took him about two (2) years. Whenever he reached a city or town he would put up in a rest house (Musafirkhana) and toil for some money which would take him further into his journey.

While in Iran they had to endure the most difficult moments, without adequate food and water for many days. The intense heat brought diseases and hardship to the entourage and two of his companions died on the way. To keep cool in this intense heat, Chacha consumed watermelon and used the shell as a head cover from heat!

After completion of the pilgrimage, Chacha returned to Kutch and joined Mawjibhai Jivraj Madressah as a Qur’an teacher and continued with this noble work for 40 years. The Madressah still stands in Kutch.

Chacha was eloquent in Urdu, Arabic and Farsi - which he taught with zeal to his students.

Yet another incident which I cannot forget was once in 1937, when I had visited Jarpara to meet my maternal family - about 5 miles from Mundra - during the holy month of Ramadan. While on my return journey on a bullock cart at about 3 p.m. I spotted a man with a white garment and turban who resembled Chacha and behold when I reached near it was none other than Chacha!

Friday being a holiday, he would visit nearby fields and help the needy to fill water from the wells. He would construct water buckets for lifting water from the wells and this was his ongoing work, as he would replace the buckets later on if damaged or stolen. The intense heat would not dissuade him from discharging such noble duties.

During monsoon season - when it was impossible to tread out for 2-3 days, Chacha would visit the needy and distribute rice irrespective of one's religion, creed or beliefs. During the time of plague - which was very frequent at that time, the government would insist on us to vacate the townships and live in the fields until the plague was eliminated. Chacha would be in the forefront to serve the populace with Khichdi and Chapatis in the fields. Once during severe flooding in our hamlet, Chacha was at it again barefooted and ever active serving the needy with food with his band of volunteers. In fact, Chacha was an all-rounder in our small community in Kutch.

In 1949 Chacha proceeded to Africa at the insistence of his son Fidahussein bhai and settled at Lindi where Fidahussein bhai was staying and later moved to Songea - southern Tanzania where he departed from this world for the heavenly abode in 1956 and is buried there.