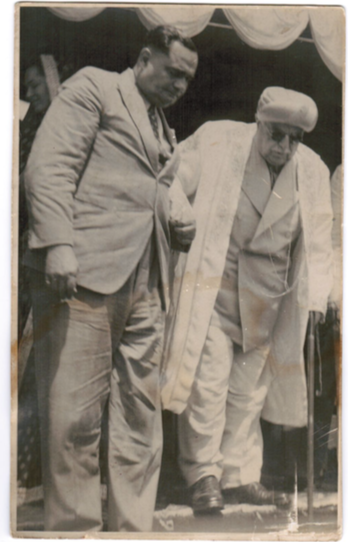 AG Abdulhusein played a significant role during Mowlana Sultan Mohamed Shah's Diamond Jubilee celebrations in DaresSalaam. He was appointed President of Tanganyika Council in 1946. He donated a floating trophy, the Agakhan Cup, for the annual Ismaili versus non-Ismaili sports tournaments.

He attended the Evian Conference called by Mowlana Sultan Mohamed Shah from July 4th to July 8th 1952. The purpose of this Conference was to discuss the economic and social problems that the Ismailis in Africa were dealing with and to make the necessary amendments to the Constitution of the Ismaili Councils in Africa.

He was blessed with the title of Count in 1954.

It was sometime in 1960 that Mowlana Hazar Imam had expressed a wish that a new Constitution be promulgated for the Ismaili Jamats in Africa. This was to be done in full consultation with all the Jamats, hence Constitution Review Committees were formed for Kenya, Uganda and Tanzania.

Count AG Abdulhusein was a member of the Constitutional Review Committee for Tanzania. The other members for Tanzania were Aziz Jamal, Nick Kassum, Mohamedali Nasser Damji, NV Gillani, Abdulla Tejpar, Fatehali Nasser Shariff, Habib Ali Meghji and Abdullah Bhojani. Jamats in Tanzania were informed in advance as to when the Committee was going to visit their Jamat Khana. Meetings were held with the Jamat with committee members sitting on the paats facing the Jamats. Sir Eboo and Vazir Ishani would lead off the discussions by by explaining the brief of the committee. (Source: Ameer Janmohamed).

Count AG Abdulhusein passed away on June 25th, 1967, he had pancreatic cancer. His grandson Gulam was only 12 at the time, studying at Ecolint in Geneva.

He has very fond memories of his grandfather, spending evenings on the Veranda of their house in OysterBay when he was in Dar, and receiving letters regularly from him when he was in Geneva.