From Khoja Wiki
Jump to navigation Jump to search

The Story Behind The Search

The story of a ship belonging to a wealthy Khoja merchant from Surat, which was pirated and for which the notorious English pirate, Capt. William Kidd has hanged 300 years ago.. 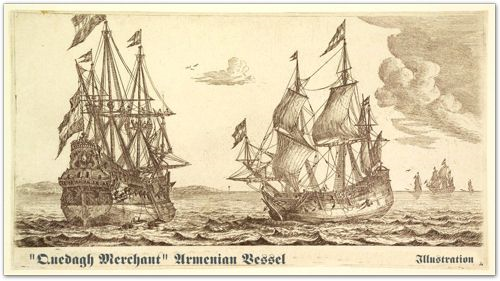 Researching Khoja families' histories from East Africa, I came across a most intriguing item.

Back in the 1960s, Rai Shamshudin Tejpar, a Dar-es-Salaam Khoja Ismaili missionary (preacher) had once intimated to his audience that somewhere in history, a Khoja-owned ship had been captured by a notorious English pirate. Although this was quite probable as it is well-known that Khoja merchants were active in the Indian Ocean littoral trading area from as early as 16th century and were frequently mentioned in Portuguese official documentation of the mid-1500 (See Khoja Shams-ud-din Gillani, a business associate of the Portuguese governors of Goa) - the piracy connection was something I had never heard of.

Then, in March 2017, Shirin Walji, an Ismaili Studies scholar from Edmonton donated her collection of East African materials to Khojawiki and included in there was a clipping from 1936 in a Zanzibari newspaper called in “Samachar” and sure enough, it provided the following titbit:

“According to Major F.B. Pearce, one of the prizes taken by Captain Kidd the famous pirate, who roved the Indian Ocean at the close of the seventeenth century, was a ship belonging to a Cambay Khoja merchant.” (1)

Cambay (or present-day Khambhat) was a major sea-port located just up the waters from another old trading port, Surat and near modern-day Bhavnagar in Gujarat.

Major F B. Pearce was the British Resident (colonial administrator) of Zanzibar and published a detailed account of Zanzibar and its inhabitants published in 1920, wherein he talks about the Khojas as being the largest Indian group in Zanzibar and made the above assertion about Capt. Kidd (2)

This was really intriguing-if Major Pierce's comment was true, it would provide documented continuity of the Khoja trading activities from the earlier Portuguese records of the 1500s to their latter dominance on the East African coast in 19th & 20th centuries. (See Khojas in Early Zanzibar History) Unfortunately, the Major did not provide any authority for his bold assertion.

Determined to dig on, I uncovered a commentary in a publication on shipwrecks (3) that yielded details on the trial and hanging of Capt. William Kidd’s on charges of piracy in 1701 and the actual ship, the details of which can be summarised as follows:

In 1698, the British Queen authorized Kidd as a “privateer” – i.e. he was given a license to capture cargo ships of Britain’s enemies as well as pirate ships and to loot them on behalf of his business partners (not unlike James Bond of the 007 fame and his “License to Kill” - yes, the British did actually issue licenses for banditry)

For two years, Capt. Kidd tried without success, to find a ship to capture and just when his crew was frustrated and he was running out of supplies, near the Indian coastline south of Cochin, he spied a ship that was flying Armenian colors (flags). Using a common “pirate” maneuver, he changed his own flags to French and tricked the ship into also hoisting, to stay safe, a French flag. Since France was at war with England at that point, Kidd then forced the ship to yield. But when he boarded, to his utter frustration, he found that the ship was actually an Indian "merchantman" (as the British called them), some of the crew were Dutch and the captain was British. Furthermore, the ship, called “Quedagh Merchant” was carrying merchandise between Indian ports, one half of which belonged to a Mughal nobleman, Muklis Khan and the rest to some Iranian-Armenian merchants, in a business deal that had been brokered by the English East India Company.

Notwithstanding the clear warning signs that he got from his fellow British captain, Kidd commandeered (stole) the ship, renamed it “Cara Merchant” and went on sell its valuable cargo, first in Cochin, then Madagascar and eventually ended up in the Caribbean near what is now the Dominican Republic, where the ship was set on fire and sunk after all its merchandise was sold.(4)

Eventually, Capt. Kidd was tried for piracy in a well-recorded case in London and on May 23, 1701, he was publicly and very cruelly hung. The reason for his brutal treatment was that in that one year alone, three ships based out of Surat, the major trading port of the powerful Mughal Emperor Aurangzeb and also the largest trading post of the English, had been looted by the British “privateers” and the nobleman Muklis Khan’s complaint to the Emperor could have cost the British their trading post (and ended the British Raj before it even began). Also, Capt. Kidd, a Scot was, to the English, expendable.

Three hundred years later, in 2007, the shipwreck of the Quedagh Merchant was located and with the diving efforts of Armenian and Indiana University (USA) historians, its identity officially confirmed. (5)

The shipwrecks commentary gave extensive details of the actual salvaging of the ship as well as some information about the story on its voyage and tragic end of Capt. Kidd but to my disappointment, the scholars’ only comment as to the ownership of the ship was a bland statement that it was “Armenian”, providing no basis for that assertion.

There was, however, a mention of a “deposition” - written evidence of Capt. Kidd after his capture, where he had stated that the ship was from Surrat and that it was built by “Moors” (a corruption of “Moros”, a Spanish-Portuguese term for their Arab rulers between 8th and 15th century, which was then used by Europeans to refer to all Muslims-Indian or Arab).

This was a significant clue - Surat, being the principal British port of the English East India Company, prior to the “purchase” of Bombay from the Portuguese (Read here about Khojas in Early Bombay) was the home of the many Indian merchants trading in the Indian Ocean at this time and many of the early Khoja merchant families of Bombay, Muscat & Zanzibar (whose family histories I have been tracking) actually trace their early commercial activity to Surat (Read here about Musa "Mzuri" Kanji" & his brother Sayyan, who came from Surat to East Africa in 1820's)

As a community historian, I cannot discard my native sources quite so easily. Three eminent persons, two traditional and one colonial had stated that the ship was Khoja-owned. Rai Shamshuddin Tejpar was regarded as a knowledgeable personality in Dar-es-salaam circles; The “Samachar” was a well-respected newspaper in Zanzibar, established in 1901 and in continuous print for over 50 years and finally, Major Pearce was the highest-ranking British colonial official and had written a very detailed history of Zanzibar. His comments about the Indians in Zanzibar suggested that he knew his subject.

“Writing in 1512, Barbosa tells us that the Moors of Zanzibar, Pemba, and Mafia used to purchase silks and cotton from the merchants of Cambay, resident in Mombasa, and in 1591 Captain Lancaster noticed during his stay in Zanzibar harbour that vessels arrived from Indian ports………..” (6)

I was aware that with the new research coming out about the Indian Ocean trading zone, it is common knowledge that Indian ships were plying the area for over a thousand years prior to the European disruption (which was primarily due to their ship-mounted cannons). So it was safe to assume that Major Pearce would have based his bold comment about the Khojas and Capt. Kidd on some reliable authority.

But the question remained - if the ship was built in Surat by Muslims, sailed from Surat and carried cargo for an important Indian Muslim prince, why were all the references that it was “Armenian” - what was the authority for that categorical claim?

I decided to ask Professor Charles Beeker, Director of the Office of Underwater Science at Indiana University, who was the co-author of an article and lead historian on the ship’s recovery operations, on whether the salvage had cast any further light on the question of ownership. Dr. Beeker reiterated that as far as he knew, the ship was Armenian but then agreed to check with his contacts. He returned, however, with the same response i.e. it was “Armenian”.

The first rule for historians is to look for the primary sources i.e. the actual documents that others are using to make their arguments, if available. (it is also the reason why Khojawiki tries to record the memories of our parents and grandparents before they pass away- theirs is a first-hand account that historians cannot ignore)

Looking into Armenian historical blogs on the web, it was quickly apparent that the ship’s ownership was being claimed because some of the merchandise had belonged to Armenian merchants and it was they, who in 1701 in London, provided direct evidence against Capt. Kidd during his famous trial. This assertion, that the ship was Armenian was made in the last 100 years, by Armenian historians and for nationalistic reasons, maintained as being authentic. It was this claim that drove the Armenian historians to start searching for the wreck of the Quedagh Merchant in the Caribbean area in 2007 (7)

One Armenian commentator did deeper academic research at the British National Archives and based on documentation found by an American researcher in 1910 (i.e much after the trial of Capt. Kidd), he concluded that the Armenians merchants had only ‘commissioned” or leased the ship. This new document was a safe passage “pass” issued by French authorities and carried by the Quedagh Merchants' English captain and it conclusively stated that the true owner of the ship was a wealthy Indian merchant from Surat called Coirgi (8)

Since the French and Portuguese also used similar phonetic spellings for names like Dewji (which they wrote as “Deugy”) or Damji which they wrote as Damgy)(See Deugy Damgy on Khojawiki), it is safe to assume that “Coirgi” was the French version of the Gujarati name Kurji, common amongst the Khojas of Kutch & Kathiawar.

Major Pearce appears to aware of the French “pass” (in 1920, when he wrote his book, it was then a fresh discovery and became a famous document as it was used to “exonerate” Capt. Kidd as a pirate) and he seems to think that Coirgi/Kurji was a Khoja. Whilst there is no conclusive evidence as yet of this ship was Khoja, there is no doubt that the Quedagh Merchant was not an Armenian ship.

Our readers whose family name is Kurji and whose ancestors are from Surat and Bombay etc. can assist this mystery by writing to us by clicking here Sadly many Khojas neglect passing down their family stories and this, in turn, allows biased scholars and politicians to write them out of history.

The Quedagh Merchant (or the Cara Merchant, as it is sometimes called) is now a “Living Museum” in the shallow waters near the Catalina Island and a major tourist attraction in the Dominican Republic and an interesting place to visit on your next Caribbean winter vacation.(9)

(3) Tripati, Sila- Shipwrecks around the World-Revelations of the Past -

(4) The Quedagh Merchant was a large 400-ton advanced ship for its time, built in a style that would make it last between 50 to a 100 years - John Stavorinus, a Dutch Rear-Admiral, who visited India on a series of voyages between 1768 and 1771 observed and described the shipbuilding technique at Surat:

“....they do not put their planks together as we do, with flat edges towards each other, but rabbet them and they make the parts fit into each other with the greatest exactness bestowing much time and attention on this operation....after which they unite the planks so firmly and closely with pegs, that the seam is scarcely visible and the whole seems to form one entire piece of timber” Stavorinus, J. S., 1798. Voyages to the East-Indies, Vol. III. G. G. and J. Robinson/Pater-Noster-Row, London (pp 21)

Long-lost Armenian ship, the stuff of legend, to become a “living museum” in the Caribbean

Explorers unravel mystery of the “Quedagh Merchant” hijacked in 1698

"Quedah Merchant was no ordinary vessel"