From Khoja Wiki
Jump to navigation Jump to search

The Uganda Collection at Carleton University

The Uganda Collection at the Carleton University Library consists of archival material that highlights the expulsion of South Asian people from Uganda in 1972, and the resettlement of Ugandan Asian refugees in Canada. The collection includes three scrapbooks, hundreds of clippings from national and international newspapers, and a memoir that documents the Canadian immigration team's experiences in Kampala during the expulsion. The collection also includes numerous oral history interviews from Ugandan Asian refugees who recall their experiences of the expulsion decree and their subsequent resettlement in Canada. The initial collection was transferred to Archives and Research Collections through the efforts of the Canadian Immigration Historical Society and the Fakirani family, and continues to be built upon by members of the Ugandan Asian community. The collection is digitized can be found online at: Carleton.ca/Uganda-collection

The 1972 Uganda Asian Refugee movement was the first test of Canada's "Universal" immigration policy as applied to refugees. The talk will examine the reasons behind General Idi Amin’s decision to expel Uganda’s small but dynamic Asian community and the Trudeau government’s reaction to the expulsion within a new Immigration and refugee policy framework. It will describe how a small, hastily assembled team went to Kampala in September 1972 and moved over 6000 refugees to Canada by the 8 November deadline imposed by the Ugandan government. Finally it will examine the impact of the Ugandan experience on the refugee resettlement provisions of the 1976 Immigration Act and on the subsequent Indochinese refugee program of 1979-80.

Mike Molloy, a retired Foreign Service Officer, is president of the Canadian Immigration Historical Society and a Senior Fellow at the University of Ottawa’s Graduate School of Public and International Affairs. He was a member of the team sent to Uganda in 1972 in September 1972 where he managed the unit that interviewed the refugees. His subsequent career included implementing the refugee provisions of the 1976 Immigration Act, including the refugee sponsorship program, coordinating the 1979-80 Indochinese Refugee movement, and managing Canada’s relations with the UN High Commissioner for Refugee in Geneva. He held various Director General level positions in the Immigration department , was Ambassador to Jordan, coordinated Canada’s Middle East Peace Process activities and since retirement has co-directed the Jerusalem Old City Initiative at the University of Windsor. In the course of his career he served in Japan, Lebanon, Minneapolis, Geneva, Jordan (twice), Syria and Kenya.

Blair Rutherford (left) helps accept the documents on behalf of Carleton and says they’ll help students in a variety of programs study and research as the university puts them online just after the fall semester starts. (James Park Photo)

Carleton University has received what is believed to be “the most comprehensive collection of documents” reporting the immigration of 6,000 Ugandan Asians to Canada in the summer and fall of 1972.

The Canadian Immigration Historical Society and its partners officially handed over the collection to the university on June 20.

“At the time when this was happening people’s minds weren’t on preserving history, but this is what this archive does. It actually preserves our history as stories,” says Salim Fakirani, who was only two when his family left Uganda at the exodus order of dictator Idi Amin. 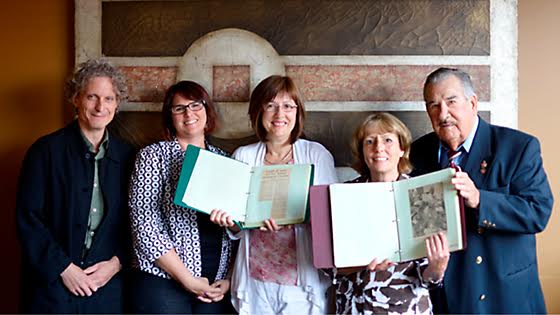 (EDITOR, KHOJAWIKI: May Ellen, Ginette Leroux and Jolene Beaupre made such a powerful impression on the Asians applying to come to Canada during those first weeks of the Kampala operation that there is a reference to them in Tasneem Jamal's novel, "Where the Air is Sweet",

"THE PEOPLE AT THE CANADIAN DIPLOMATIC OFFICE ARE NICE. THE YOUNG GIRLS HANDING OUT VISA APPLICATIONS WERE SMILING ALL THE TIME AND THEY WORKED QUICKLY" PAGE 221 )

The collection will be accessible on the Internet by Sept. 28, just after the 40-year anniversary of Amin’s order, says the society.

It includes hundreds of British, American, Canadian and Ugandan newspaper clippings and a day-by-day narrative of the three-month immigration process conducted by Canadian immigration officials based in Uganda. “It’s a significant event in Canadian history. It’s the first large-scale non-European immigration to Canada … so it’s worth studying from an academic standpoint,” says Fakirani.

Many of the Ugandan Asians who travelled to Canada had university degrees from England, says Ginette Leroux, a visa worker who helped hand out about 2,600 immigration applications a day during her month’s work in the East African country.

“They were very pleasant people and they were very educated people. I think we were lucky to get them,” she says. “I think as far as immigrants and immigration goes, we got the cream of the crop.”

The collection couldn’t have come at a better time for the university’s Institute of African Studies, says professor and director Blair Rutherford, as there’s a new first-year course starting in September that looks at African refugees.

It should also help students in courses such as history, anthropology and political science, he says. Graduate students will benefit, too.

“We have students who do master’s and PhD theses on this topic. In fact, I know a few students looking at Ugandan Asians in Canada, so this is excellent material they can access directly on campus.” Fakirani looked over the collection before it was given to Carleton and says more than just students and researchers will read its contents.

“It’s just unbelievable the amount of documentation there is of what happened during that period,” he says. “For those interested, including the South Asian community, it’s incredible.”