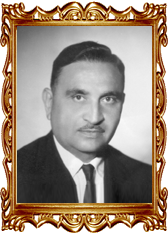 AbdulHusseinBhai was a successful Khoja businessman in Iraq.

Together with his family, he established a prosperous export of dates business.

He was also famous for his extensive philanthropic and community work, which included building hospitals and masjids, including the renowned Masjid-al-Joumhouria in Basra, adjacent to which a street was named in his honour by the local community.

AbdulHuseinbhai Jetha Gokal continued to devote majority of his time to looking after pilgrims coming to Iraq and other philanthropic activities such as building mosques and hospitals.