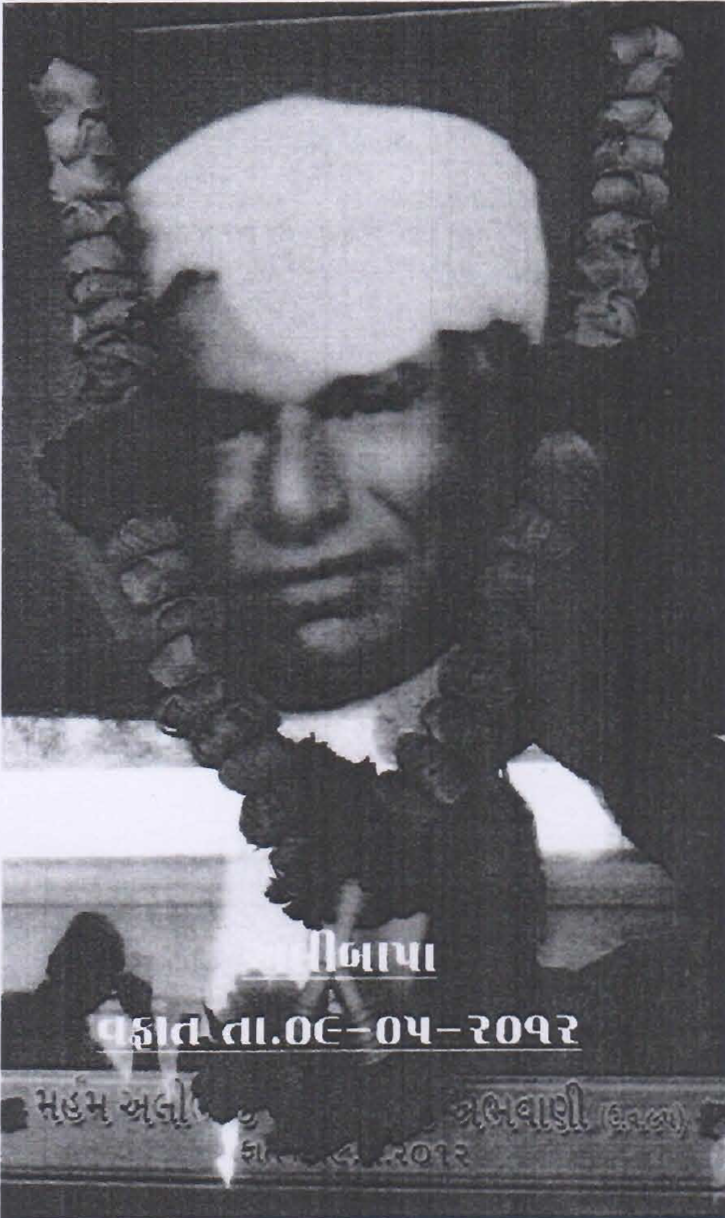 Alibhai Kara Abhwani came from a farming family in Jamnagar District but unlike many farmers, during his free time, he explored the "what, when and how" of planting crops. And the results of his efforts - his readings, his experiments, the better producing seeds etc., Alibhai shared freely with the farmers of his district so that everyone could benefit. Because of his exemplary life, the diverse communities of the entire area of Jamnagar knew Alibhai Abhwani as Ali Bapa, a term of great respect in Kathiawar, Gujarat.

Ali Bapa was born at his family farm in the rural area known as Sarmat, just outside of Jamnagar Town where he grew up working on the farm. His ancestors had been hired by some Hindu merchants from Porbandar to manage a watering well, built by the merchants, as an act of charity for thirsty cows. The merchants had also bought them some land to grow their food but the Abhwanis' expanded those into sizeable farms. As a result, Ali Bapa grew up with great respect for both, all animals and all people.

Around 1975, the local farmers were growing a variety of hybrid pearl millet but due to unusual weather conditions, storms ruined a whole season's crop. Farmers in entire villages lost their livelihood with an overall loss of 30-35 million rupees and many were forced into bankruptcy. Ali Bapa took up the local leadership and negotiated with Jamnagar District Cooperative Bank for the farmers to get a new loans so they could get back on their own feet. Whilst he struggled for 3 years to get that done, he started a button factory in the village so that the farmers could survive.

Since his youth, Ali Bapa enjoyed experimenting with different kind of chilies and around 1978, he planted a new variety which failed completely and hence he lost 2 years of work and effort. But Ali Bapa did not give up and started visiting farms in other towns to seek different chilies seeds. When these efforts failed, he persisted and replanted the chilies at different times of the year. He discovered that October, due to the coolness, was a good time and although the chilies turned out with mashy skin, they were quite red, not too spicy and were in high demand at the Jamnagar marketplace. In the first year, in 1983, Ali Bapa had a profit of Rps 1.5 million and soon those chilies became the solution to the farmer’s financial problems, at that time.

Another time, there was a shortage of seeds for planting and Alibhai visited the neighborhood farmers, where they were preparing their summer plantation with the flower of “water chillies”. He noticed that in the whole area, around April, there was a good amount of green chilies and they were in good demand at the market. He brought this result back to Sarmat.

From his research, he grew a special kind of chillies he called “Resham paksho” that became so popular that in 2002, he was given the “Rashtrapati Award” by the Government of India.

But for Alibhai, the real award was the future outcome of the Resham paksho chillies. Soon, all the farmers were persuaded to plant this chilli and the ones that had taken bank loan of Rs 30-35 million were now having Rs 3 million in savings. If Ali Bapa had wished, he could have kept the monopoly of the chillies for himself, but the well-being of the village people was his aim and he always worked hard for the benefit of the local community.

Ali Bapa became the leader of Jamnagar Agriculture Produce and Processing Society and was friend with Ifcona Field Officers, so they used to travel together all over the region researching and advising farmers. If they found something new, Ali Bapa would carry out further experimentation and then share his results and know-how with the other farmers.

In the town of Magtir, Ali Bapa also planted successfully and if the farmers needed financial help to pay the helpers or pesticides, Ali Bapa would give them 25-30% help and would advise them so they come back to break-even or be profitable.

It was well-known that whatever endeavor he would take on, any research or work that he would work, if he would find that was going to be a profitable, Ali Bapa would not only share with his friends and acquaintances but anyone that would ask. He never charged any money and became so knowledgeable that he was like a home-grown university to the other local farmers. He was regarded as a protector of the farmers and farmers from all over Gujarat and outside would come to learn from his investigation and work.

And whenever he had a successful venture, he would buy candies and distribute it to all the children in town.

There are many stories about Ali Bapa generous character.

One of his strongest beliefs was the benefit of feeding others and he regularly fed around 300 children from the town's orphanage. It all began by him bringing the younger orphanage kids home and make them acquainted with his wife. He would sit and talk to them; they would feed them, wash their clothes and send them back to the orphanage.

Ali Bapa had a big home and his doors were open to everybody: travelers that came to town wouldn’t leave without having a meal with him. Even before he was wealthy, he had the same motto: Feed others and be happy.

Ali Bapa used to be very concerned about the education of children in the village. Some of the families used to produce illegal alcohol and did not care about children's education. Ali Bapa would visit them to convince them about the benefits of education and sometimes he would end up subsidizing their uniform and studies. He would also visit local schools and give lectures sharing popular sayings and proverbs as well as his wisdom and knowledge. Many of the youths when they grew up, did not follow the family alcohol businesses and went into official jobs and gave credit to Ali Bapa and his influence.

His love was not restricted to humans. His father, Lalji Bapa had a lot respect for animals and had 2 cats and a dog as pets at home. Ali Bapa used to eat with the animals and would only eat if the family cat received it's milk. His granddaughter, Rukshanaben, always said that "Grandfather kept on asking rotis during meals to feed the dog." When they questioned him why, he would answer “who do the animals have besides us?”

One time, when Ali Bapa had was sick with gangrene and had to be hospitalized, the family cat wondered around the house looking for him and because she didn’t find him, she disappeared so nobody could find her. When visiting Ali Bapa at the Hospital, the first thing he would ask was: “are you giving milk to the cat?”. Not to worry him, they would assure him all was well. When he got discharged from the Hospital on the 15th day, everyone was concerned because now he would know the truth about the cat. Less than half hour after Ali Bapa got home, the cat reappeared.

One year, when there was a draught in town and all the other ponds had bad polluted water except one of his ponds. It was not a serious issue for the people but a problem for the farm animals. Ali Bapa had planted peanuts which were doing well, but to help farmers to supply water to their animals, he had his plantation destroyed.

Today, many of the poor in the Sarmat will say that if they are living peacefully, it is due to Ali Bapa’s doing. Around 1975, the village used to get cheap wheat from Australia but some of the villagers would can it and and sell it in other towns. The DVSP (Govt) found out and put a prohibition on the selling. Those villagers came to Ali Bapa for help and once he realised that they were overcharging the local poor, who were in greater need of the wheat. So he made the villagers agree to sell the cans for a cheap price, then went to dialogue with the DVSP and this was the only way the poor had access to wheat.

Ali Bapa made no distinction between daughters and sons, treating them all equally. In fact, he would encourage his granddaughters to use tractors and other equipment so as to learn the farming. He would also treat the daughter-in-laws with equal respect, recognising that they were also someone else’s daughters and "did not just fall from the ceiling." In fact, he never called them daughter-in-laws-that word was not even used in the family.

Ali Bapa was highly respected in the whole village because, whether Hindu or Muslim, Ali Bapa never distinguished people by their religion. The village had many marriages and many daughter-in-laws used to be friends of Alibapa's grandchildren. For the bridal parties, the Hindu brides would choose Ali Bapa's sons as their brothers and then they would keep up with the rakhi banda tradition with them. Even when these boys finally went overseas for their careers, the rakhi reached their local "sisters". Such was his respect, that whenever there was a event or an occasion in Ali Bapa's home or family, the village youngsters took over and whenever there were wedding inquiries in town, even if they were in Hindu families, people would come to Ali Bapa for local references.

Many village children were used to Ali Bapa's kitchen since they were brought up going to his kitchen and eating whatever they felt like. He would also give most of them pocket money. Even the water he had in his yard was available for anybody who was thirsty but rich or poor were served from the same clay-pot.

He made sure he gave his workers got decent wages and would sell them wheat at a very low price plus every evening gave them a bag of vegetables and and free spices. His grandparents having come from the class of agricultural workers, Ali Bapa respected his own workers.

Ali Bapa did not believe in harmful social traditions as he was aware that less fortunate families faced financial challenges to keep up with these traditions. Therefore and although he believed in holding a large ceremony in honour of a deceased relative, when his own wife passed, he did not have this ceremony and instead he setup a Computer Lab for the village. At that time, he said: "if the point is to feed everyone so you can pray for the soul of the deceased, by setting up the computer lab, her soul will benefit more and achieve faster peace due to the prayers of the little children since they pray more then the adults".

On May 9th 2012, Alibapa was in hospital and requested to be joined by his family and asked everyone to pray for him and sing ginans- while praying in congregation with his family, he passed away.

His family only performed a gathering where everyone spoke of his deeds/actions prayed for the peace of his soul - But they didn't cry or mourn his death, since Ali Bapa believed that the deceased were happier then the ones alive.

Alibhai Kara Abhwani was a special soul that brought enlightenment around him. Today, many of his grandchildren live abroad where they try to live according to their grandfather's teachings and ethics. IID (2017)