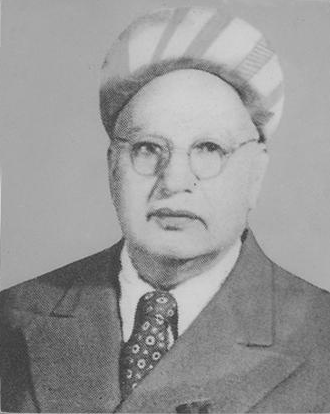 Alibhai took his formal education in Porebandar. He passed the 7th class of Gujrati and got admitted in the Middle, where he learnt English upto 4th class. He also learnt to master Urdu and Arabic.

In 1910 he married Rahmat Banu, the daughter of Ismail Jamal of Porbandar. Unfortunately, his father Nanji Bhai died on the same day in the evening, at about 5.00 p.m.

Alibhai Nanji came to Manavadar in October 1931, where his second wife died in 1932. His mother also passed away three months after his wife's demise on March 28, 1932. His third marriage with Sonbai alias Shireenbai, the daughter of Rawjibhai Hashim was solemnized on February 22, 1933.

The health of his third wife Shireenbai deteriorated due to stomach pains. She was taken to Rajkot for treatment, where she died on January 3, 1946.

He served 10 years as a teacher in Kutch and 45 years as a regular missionary.

He was blessed with a large family; however, seven of his sons expired in infancy. He left behind five sons, Abdul Rahim (d.1999), Abdul Hussain, Sadruddin, Hassanali and Mohamed Ali; and four daughters, Sakina (d.2000), Rawshan, Nurbanu and Izzat Khanu.

Huzur Mukhi Abdul Hussain has served mostly in the literary field, and compiled many articles and books. He worked mostly in the history of the Indian Pirs, and his book, 'Pir Padharia Apan'e Dua'ar' divided into two volumes was published in Bombay in 1986. He leads a retired life.