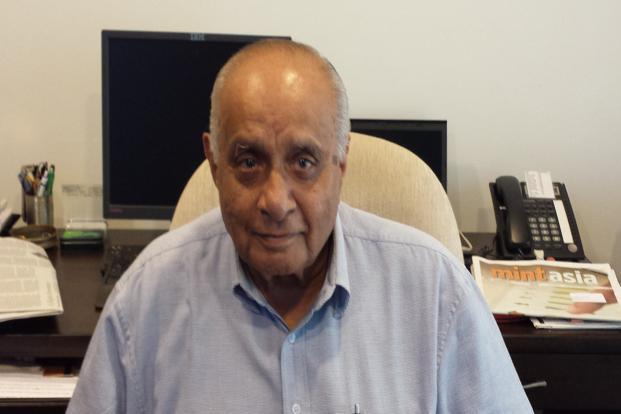 Singapore: An announcement in October brought Singapore’s most famous family of Indian descent back to the public limelight.

After keeping a low profile for over a decade, the Jumabhoy family, once known as the wealthiest non-Chinese family in South-East Asia, came together to start a real estate firm—Raffles Residency Pvt. Ltd—to develop ultra-luxury villas in Bangalore, Karnataka.

After a 15-year absence from the real estate business, the third-generation of the Jumabhoys teamed up to return to the business in which the family had built its fortune. The family is coming together after having being riven by internecine feuds that date back to the early 1990s.

For Ameerali R. Jumabhoy, 88, his children Iqbal, Asad and Naseem Somjee coming together to launch the Rs.350 crore property venture is only picking up from where the family had left off.

“This is only the starting point for us in India. But we had started off expanding our business to India in 1994 when we bought 200 acres of land in Gurgaon (under Scotts Holdings Ltd). If we had stayed on and developed it, where would we have been today? It was our foolishness that we exited as the family fight broke out—even at that time, we sold our Gurgaon land for a profit of S$18 million,” he said.

Jumabhoy also clarified that his children ran their businesses independently and he was no longer involved. His son Iqbal is the chief executive of SilverNeedle Hospitality, which currently manages over 4,500 hotel rooms in the Asia-Pacific region with a target of increasing this to 10,000 by 2015.

Scotts was founded by Rajabali Jumabhoy, Ameerali’s father, a spice trader who migrated to Singapore from Kutch in western India in 1916.

The family feud for control of Scotts began in the early 1990s when Rajabali took Ameerali to court. It then extended to the third generation as Ameerali’s eldest sons—Rafiq and Iqbal—took sides in this battle. In 1996, Rafiq won effective control of Scotts with support from his uncles and ousted his father, Ameerali, and estranged brother Iqbal from its board.

But the battle intensified and the family lost management control of Scotts, which was eventually acquired by Singapore-based real estate firm CapitaLand Ltd.

“Our family fight is in public domain. The case took five years. Just the service apartment arm of Scotts was worth around S $700 million in the 1990s with properties in Singapore (Palm Court and Ascot), London (Ascott Mayfair), Bangkok, Jakarta and Australia. This is just one of the many companies under Scotts. We built Singapore’s first shopping mall (1982) and were the first to have a food court inside a mall,” he said.

Ameerali rues the fact that the Jumabhoy family failed to realize its potential to build a company that could have become a global giant. “We had a future—then the family quarrel started.”

“Banks came to us and said ‘please don’t quarrel, we will adjudicate—you have a goldmine’,” he said. “But, looking back, I have no regrets.”

While his family business had kept him busy in the latter part of his life, Ameerali participated in India’s freedom struggle and also was involved in public life in Singapore for several decades.

“My father, Rajabali, shipped me to India, along with my pregnant mother and two younger brothers. My father was in charge of organizing the ships and getting key people out of Singapore. Until then, I had nothing against the British, but the way we were treated in the ship made me turn my back on the English. We were put next to the toilet in the lower deck—the whites took all the available accommodation on the ship,” he recalled.

He first attended Ismail Yusuf College for two years before moving to St Xaviers College in Mumbai for his Bachelors, when he also became part of the Bombay Students Union under Prabhakar Kashinath Kunte.

Recalling an incident, Ameerali said he had been unable to sit cross-legged ever because of an injury on his right knee, where the police had hit him with batons during a rally in Bombay, now known as Mumbai. After a strike in college, he was briefly jailed in the Azad Maidan police station. He also narrated another incident in which he had joined two others to write a letter to the public, calling for a revolt during the Indian Naval Mutiny in Mumbai in 1946. “We went underground and surfaced only after Aruna Asaf Ali’s efforts ended the naval stand-off,” he said.

After returning to Singapore, Ameerali took up various government positions and was also responsible for drafting the country’s employees provident fund Bill.

“After the British left, my father took charge of the housing development programme. We did not know how to fund large-scale housing, and in 1955 I drafted what was then called Singapore’s Central Provident Fund Bill—this was approved by parliament,” he said.

“With this Bill, it was the people that funded themselves out of their own earnings. So you now have a government that had very little debt. At that time, we had debt, but it never multiplied; but went down and down as our economy grew,” he said.

Ameerali said he had led a government and business delegation to India in the 1980s to attempt and replicate the Singapore housing model in Mumbai but gave up on the project because of red tape.

“The problem with India is that when you get land for projects, somebody puts their finger up and objects,” he said. “If you ask ‘who the hell are you?’, that party will say they will block the project. Then you’ve got to pay that fellow off. This is where governance comes in. In Singapore, once you get an approval from the Land Authority, no one will come and disturb you. So the final cost is at its lowest level and your final profit will be at its highest level. That means the income tax the government gets is higher—the country benefits,” he said.

Pointing to a photograph of his father with Indira Gandhi, Jumabhoy says that India lost the competitive advantage in many sectors after nationalizing several industries. “We had business interests in India’s shipping industry—my dream was that India would become a great shipping nation, but that ended when private shipbuilders were nationalized,” he said.

He has also led business delegations to 22 countries across Asia, Africa and Europe, including Singapore’s first delegation to South Africa when it was under the apartheid regime. He continues to remain a patron of the Singapore Polo Club, a sport that has caught the passion of his children and grandchildren.

Edited excerpts from an interview:

You have led several business delegations to India—where do you think India went wrong?

India’s cost of labour is the lowest in the world—you should, therefore, be doing better than China in everything. The causes for the decline are outlined. Indians are one of the brightest people in the world—just look at the Mars Mission that ISRO (Indian Space Research Organisation) is executing. I remember accompanying our founder prime minister Lee Kuan Yew to ISRO once and he was amazed that India’s space programme was so far ahead. There is only one word that describes everything that went wrong with India. Lack of good governance...

Singaporeans are not investing in India because of the governance issue. There are some companies here that have invested there, but they are invested in private companies. For example, Singtel’s investment in Bharti Airtel Ltd—they picked on a private company that had a vision.

Can the form of governance in Singapore be applied to India?

Such rules cannot be applied to everyone—this was a little island and its only objective was survival—it had to figure out how to survive after the British left. As far as governance is concerned, the Singapore model can work in India—in the states as well as at the centre. That is a major thing. India has got so used to a system that it seems almost unchangeable and people have got fed up and are looking for other ways and means of making money. The other thing is the educational system—there is no one outside school in Singapore—that is a very important thing.

You have written a book, ‘India, Pakistan and Bangladesh: Changing dynamics of regional integration, SAARC and beyond’. What do you see as being the future of Singapore and also that of Asia?

We (Singapore) will become a lot closer to our neighbours. We have limited space; our SMEs (small and medium enterprises) have to expand and go out of the country. We need a balance in Asia to counter China, and that balance is India. Singapore will become a stronger democracy—it is a natural growth and it can’t be imposed on us. The conditions are ripe for those changes.

Do you know where we will lose? We will lose the traffic that goes to and from China to Europe and the West via Singapore (shipping) because for six to eight months in a year, the Arctic sea route will be open in the future. India is building its roads through Myanmar and through Thailand, and this road connects to China. So North-East exports will go directly. China is re-building the old silk route where India will also connect through Pakistan and Afghanistan... Good governance plus cheaper oil will propel India back into the big league. China will be a big problem tomorrow if countries don’t stand up to it. The only country that can stand up to it in Asia is India.

With the coming general election, where do you see India headed? What is your view on the Bharatiya Janata Party’s prime ministerial candidate Narendra Modi?

I met Modi at the 2012 Pravasi Bhartiya Divas that was held in Jaipur, and during a brief discussion, I had told him that Hinduism was not under attack in India for him to be continuing with his existing policies. I don’t think he liked what I said. According to the Indian media, he is in a very strong position in the coming elections. Every country has to hit a bottom and then it comes up—as it comes up, it may not be in the design that we want. But that is the reality.

I know first-hand what extremism can do. I could have lost my daughter-in-law in 26/11. She was staying at the Taj, but had gone to stay with her aunt’s place that night. India still has Maoist trouble, but there is some rationale behind it, as those are tribal people whose lands are being taken over and they have nowhere to go. If you can change that, change the system at the bottom, it will disappear.

It is also possible that if Modi comes to power, he turns out to be like Atal Bihari Vajpayee. His philosophy I disagree with, but I don’t think he will jeopardize India’s future.