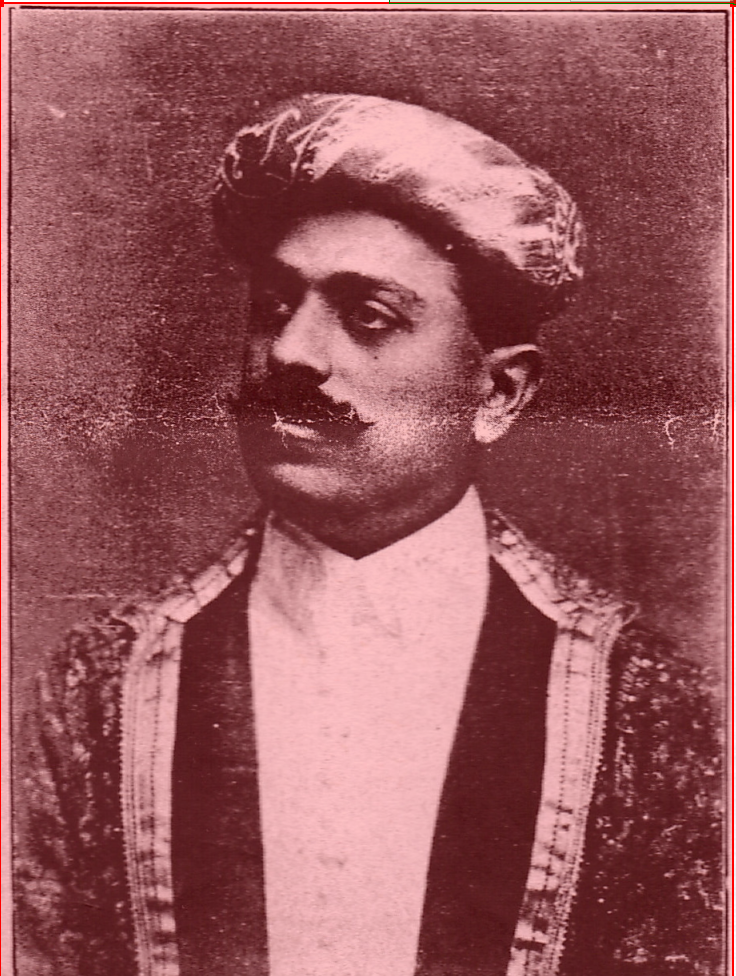 "THE HON’BLE MR. FAZULBHOY CURR1MBHOY, IS THE SECOND SON OF SIR CURRIMBHOY EBRAHIM, BART., the renowned Merchant Prince of Bombay.

Mr. Fazulbhoy is one of the most esteemed and popular men in social and commercial circles in this great city. He was born in 1878, he entered business life at a very early-age, and soon made himself the right hand of of his father in the various branches of his extensive trades.

He represents the Bombay Mill Owners Association on the Legislative Council of His Excellency the Governor of Bombay under the new rules of election of Members of Council. He was Chairman of the Bombay Mill-owners' Association in the year 1908-1909, and is on the Committee of that body.

He is also a Government Nominee of the Board of the Victoria Technical Institute, and a Member of the David Sassoon Reformatory. He takes a keen interest in the Municipal affairs of Bombay, having represented Mahim Ward on the Corporation for the last fifteen years, and was Chairman of its Standing Committee in the year 1910-11.

Mr. Fazulbhoy is associated with every movement for the advancement of the Moslem Community and naturally takes a very keen interest in all that pertains to the moral and material welfare of his co-religionists, whose confidence and esteem he enjoys to a very remarkable degree. He is a Trustee of the Aligarh College, a Member of the Committee of the All-India Moslem League, and an Honorary Secretary of the Bombay Anjuman-i-Islam.

His name, in fact, is associated with every important public movement in the City of Bombay, and there is hardly any such movement to which he has not contributed his time or money."

PHILANTHROPISTS AND THEIR INSTITUTIONS

Sir (Fazalbhoy) Currimbhoy Ebrahim set up this institution in 1894 on Altamount Road for the welfare of poor orphans from the Khoja Muslim community.

Sir Fazalbhoy Currimbhoy Ebrahim (1839-1924) inherited trading interests as far as the Arabian Peninsula, the African coast and Canton. Gujarati Muslims based in Bombay had long monopolised India's overseas merchandising in opium trade before the Opium War.

He multiplied his inheritance several fold by setting up E. Pabaney & Co. in Hong Kong, and trading in silks. He then turned to manufacturing textiles by purchasing a group of defunct mills, and naming them ‘Currimbhoy Mills'. This made him the second largest mill-owner in the country, and the distinction of being one of the leading industrialists of Bombay. Living in 'Pabaney Villa' on Warden Road, he was a Freemason of the Bombay Lodge and was elected President of the Indian Merchants' Chamber in 1914. Sir Currimbhoy was created a baronet of Great Britain and Ireland in 1910 and granted lands to support that dignity by the 'Currimbhoy Ebrahim Baronetcy Act 1913'. This Act was later repealed and properties distributed by a State Act in 1959. Fortunately the creation of wealth was not his only aim. He contributed large sums of money for building the Museum (Rs 3 lakh), and the complex of the Cowasji Jehangir Hall and the Institute of Science alongwith Sir Jacob Sassoon (Rs11 lakh out of total cost of Rs19 lakh).

Noting the plight of Khoja orphans in the city, he desired to build a home for them. A home where they would receive shelter and food for their bodies and minds. Being an Ismaili Khoja he had innumerable friends following various religions. One of these was Maharaja Madhavrao Scindia of Gwalior, one of the most generous princes. Scindia donated a large parcel of land extending from Altamount Road down to Pedder Road to establish this orphanage. Unfortunately the Currimbhoy Orphanage has been wiped off the map of Mumbai and its place take by monstrosities of cement and glass.

History has forgotten these founders of great institutions, but their dreams live on.

The Voice of Malabar Hills