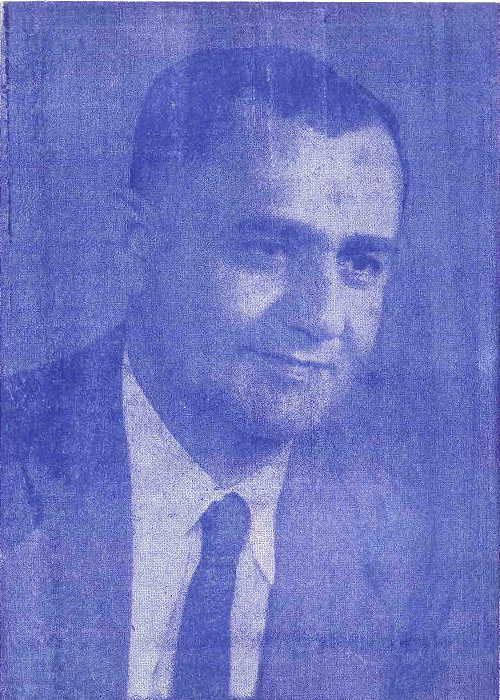 Hassanali Abdulla Chagpar used to say that Napoleon, Emperor of France, removed the word "impossible" from his dictionary because to him, what appears "impossible" is in reality just “difficult” and it is only in surmounting difficulties, that one achieve success.

And Hassanali Bhai knew because he faced many difficulties but ultimately became a big success in his own life.

The famous "Chagpar Medical Store" on Mosque Street, Dar es Salaam was a result of Hassanali Bhai's strong ambitions, the support his friends as business partners and the loan facilities of the Ismaili Co-operative Society, as well as the Diamond Jubilee Investment Trust.

Hassanali Bhai had no shyness in admitting that he only was able to get 2nd standard education in English and 5th class in Gujarati. Because his dream was to became a successful trader, in 1926, when he was only 15 years old, he left school to start to learn “from life” He spent the next 12 years in service i.e a salaried job, visiting small villages buying cotton and selling merchandise. He acquired plenty of experience in all aspects of commerce and became a good trader himself.

His first job, in 1927 was at the very prestigious Khoja trader of Morogoro, Alibhai Lalji, at the salary of 1.50 shillings per day. That work was so hard sometimes he had wake up 4 o'clock in morning and be driven upto 50 miles away to purchase cotton. Due to cotton dust, he damaged his eye sight, so he had to spend the next one and half year for treatment in Dar es Salaam and Jungbar. He used up his all savings and in fact, became debtor.

But while he was working in Matombo area near Morogoro, he learnt a very important lesson on cooperation. Once he was travelling from Matombo to Morogoro in a lorry truck owned by a Greek person. On the way, the car battery died, so all had to push it to kick-start the engine. Everyone went down to help except Hassanali Bhai, who just stood around and watched. The Greek was angry and scolded him "why are you not pushing? When lorry was running, you had enjoyed that and now it seems too difficult to you?” Seeing that he felt insulted, the Greek told him, "Remember that we all are travelers of one vehicle and also one in happiness and sadness. When you really understand this, you will remember me".

And Hassanali Bhai said he always remembered that Greek because the establishment and success of his business life, was due to the cooperation of others.

Another lesson he learnt was that to succeed, one has to do what ever is required. When he was working in Lalago's Shoes shop, he had to clean the dirty feet of peasants to whom he sold the shoes. In those days, the traders were very respectful of their African customers, who gave them roji food.

In 1930, the community opened its first medical dispensary in Dar es Salaam and Hassanali Bhai got a job as a prescription clerk. He worked with Mr. Kassamali Nenshi. who did dressing along with compounding. Hassanali wanted to learn compounding and Kassamali Nenshi taught him. In 1933, in 3 years, he became assistant compounder. By 1934, he was compounding almost 80% of the medicines himself.

In 1935, he got married and with increased family responsibilities, in 1937, he left this job with an ambition to become successful in business. He had a plan to open a medical store (a pharmacy) and presented it to his circle of his friends, highlighting with his 7 years experience of dispensary work. Even though all friends were in employment and not successful businessmen, 4 friends had the the faith and courage to give him 250 shillings each to start “Chagpar and Company”, with an initial capital of 1000 shillings.

From that, 500 shillings spent in furniture fitting, stationary, trade licence etc. When he went into the market to buy medicines, due to his good standing, he got 300 shillings goods on credit so his shop started with such little stock that sometimes he had buy medicines from another store to supply to his customers. Originally, Hassanali Bhai did not keep a big margin and at the end of the first year, the business faced a loss. In second year, he increased his prices and the profits grew and also his credit increased in market. During the year, 2 friends withdrew and another friend, Abdulkarim Karmali Mohamed joined him

It was war time so there was shortage of goods in Tanganyika. So Abdulkarim went nearby countries to buy goods. And then the Ismaili Cooperative Society gave them a loan to increase their stock. With their hard work, Chagpar and Company 's credit also increased. At that time, one European store called " Hippocrates Medical Store " situated on Acacia Avenue (now Samora Michel Avenue) went on sale and the two partners bought it with a cash loan of 10,000 shillings from an Khoja businessman. They called it Avenue Stores and it became a big, successful fancy goods store.

Officer of Religious Education Board

Officer of Girls School Board.

Board of Directors of Ismaili Building Development Limited

1. Always think about how to progress and then work for it.

2. Remember God in difficult times and He will help to solve your problems.

3. Be united as it is great strength.

4. Fulfill your duties in your work with diligence.