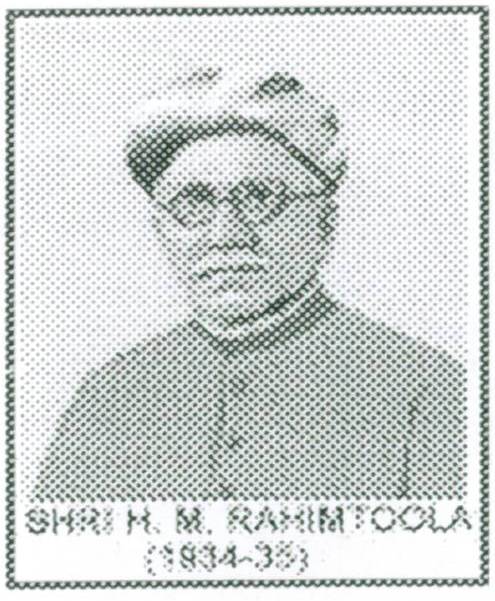 Hoosenally Rahimtoola was an Indian Legislator. He remained Mayor of Bombay from 1934-35 and was Minister in the Provincial Government briefly. Rahimtoola was also President of the Bombay Legislative Council during 1936.

Hoosenally M. Rahimtoola was born in May 1890 to a merchant trading family who were well established politically in Bombay. Being the first male grandchild in the family he was brought up by his elder uncle Mohammadbhoy Rahimtoola.

He then joined business with family and remained active till partition of the sub-continent with over a dozen public and private listed companies. One of the major industries that Hoosenally was involved in was Currimbhoy Cotton Mills.

He was elected to the Municipal Corporation in 1918 where he remained active for many years in different capacities including being councilor. This embarked his career in politics which would last over thirty years.

By 1920 Hoosenally had become a member of the Bombay Legislative Council of which he remained a permanent part till the late 1930s. His work on housing, local self government, civic works remained a key part of his struggle and dedication. He served on several committees chief among them Sea Encroachments [1925], Black Bay Layout [1927], King George V Memorial Fund [1936-37] etc.

In 1927 he was part of a board set up under the then Commissioner of Police Bombay Mr. D. Healy to look into sorting and regularizing the Hajj process for Muslims in British India. The First India Hajj Committee sat in April 1927 in Bombay and this was to become the initiation point of the modern national Hajj Committee’s across 21st century India.

He was elected as Fourth Mayor of Bombay in 1934-35. By 1936-37 he became President of the Bombay Legislative Council. He also served as Minister Local Self Government for a brief period in 1937 after provincial elections were held nationwide.

In 1935-36 he also served as trustee of the Bombay Port Trust representing the Mill owners and Municipal Corporation.

On the social welfare front his activities embraced vast field viz. student activities, community work and memorials to stalwarts such as Shri Lalji Naranji, P.B.Dinshaw and D.E.Vacha. Making services to the Khoja Community a starting point he gradually enlarged its orbit.

On the literary front Mr. Hoosenally Rahimtoola co-edited a book with Clifford Manshart titled ‘Bombay Municipality at Work’ in 1935. It was an archival of a symposium detailing the working of the Corporation and its effectiveness.

Hoosenally’s father Jafar Rahimtoola was also active in municipal politics and remained Mayor of Bombay during 1909-10. He was also a leading Barrister of his time having been alma mater from Lincoln’s Inn. His uncle Sir Ibrahim Rahimtoola was a well known reformer and parliamentarian – he too remained Mayor during 1899-1900. His son Prof. Shahbuddin H. Rahimtoola has been responsible for revolutionary changes in the field of Cardiology with his hypothesis on the Hibernating Myocardium.

Hooseinally was a very good student and in the Matriculation examination of the Bombay University, he stood 7th and was awarded the Jairazbhoy Peerbhoy Scholarship, being the 1st amongst the Muslim students of the Bombay Presidency. He then continued his studies and graduated in Arts from the Bombay University. Being only about 24 years old whom his father Jaffer died in 1914, Hooseinally had to look after his widowed mother and younger brothers and sisters and to the family business.

In 1917-18, the family separated from Sir Ibrahim and Hooseinally had to invest the share in the family business which came to Jaffer’s heirs. Due to circumstances then prevailing in Indian, some of the investments proved to be bad about Jaffer’s family had a financial set-back.

Hooseinally was interested in civic matters and was a number of the Bombay Municipal Corporation and of its Standing Committee. He was elected on the Mayor of Bombay. He was a member of the Bombay’s Council of Ministers.

During the 2nd World War, Hooseinally want to East Africa and later settled down with his family in Karachi. In Karachi, at a very advanced age, he studied law, became an advocate and assisted his son, Jaffar who set up his practice as an advocate in Karachi.

Hooseinally was the Chairman of the Census Committee formed to undertake a census of the Ismaili Community in Bombay. He was also a member of H.H. The Aga Khan Golden Jubilee Celebration Committee.

Hooseinally was a religious-minded person, a man of simple habits and had an affectionate nature. He helped many who came to him with their problems

Mr. Hooseinally M. Rahimtoola had round about 1940, prepared some Family Notes. He had also kept, prior to his departure for Africa, some rough notes with his younger brother Suleman and, later on, some more notes with his son Jaffar.

This paper is an attempt to put together the available data for future generations of the family. It is hoped that the younger members of the family will periodically up-date this paper.