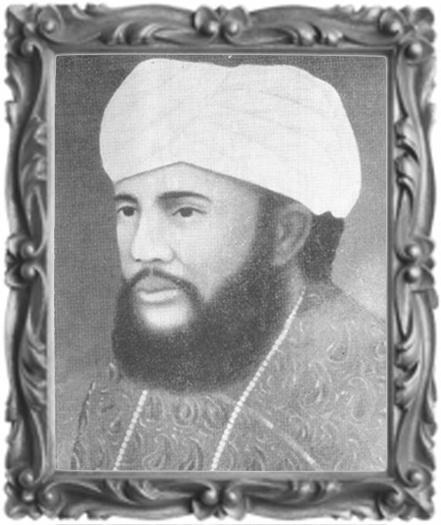 Ismail Gangji was a petty spice trader on foot with a bag on his shoulder and wandered from one village to another and was a cheater to give less in weighing. He sold spices in place of the bales of cotton and disposed of in the market. He passed almost 25 years in this trade, which he started at the age of 6 to 7 years.

The Khojas in Junagadh State lived mostly in Junagadh city, and not in Verawal, Kutiyana, Mangrol or Wanthali. The Nawab in the Junagadh State was the final and absolute authority and the administration conducted under his direction by a Dewan assisted by heads of various State departments.

His father Gangji was an employee in the wardrobe (jamdarkhana) of Junagadh State. The wardrobe on those days had a wide testimonial of opulence and magnification of Nawab Shahi. Gold, rich gem stubbed ornaments and jewellery, valuable garments and clothes were stored in the wardrobe. Gangji was working as an assistant keeper of a certain Javerbhai. Ismail Gangji also joined the wardrobe in 1819 as an ordinary worker without salary. . Once the wife of the Nawab lost her precious necklace. He found it and returned to the Nawaba. His honesty and loyalty were appreciated, causing the Nawab to promote him to a very elevated post. He was confided the Revenue Department and soon afterwards, he became the head of the departments of the Treasury and Mint in 1821.

Ismail Gangji visited different villages and collected revenues for the Nawab. For the purpose of land revenue administration, the Junagadh State was divided into 12 districts with a total of 842 villages. He also took leading part in the welfare programmes of the State. It was he who initiated a plan to start a railway line in Junagadh. Eventually, the main railway line from Jetalsar to Verawal for the first time in Junagadh was begun and was opened for traffic in 1888 after his death. He has also appointed the head of the provisions and supplies of the State. Ismail Gangji became a best model of an honesty in the Junagadh State.

Once he had to go outside the State to buy some valuable articles for Mr. Lint, the then political agent. He was given a letter of introduction, insisting all those concerned to treat him with honour due to a high official. The Nawab also gave him a piece of land in appreciation of his 50 years services in 1869. He was granted land in the village of Anandpur, where he built quarters for the destitute. This is on the records of the Junagadh State, and the extract of the Document No. 11 reveals: “You have been loyally serving us in person for the last fifty years. You have carried out all the responsible jobs entrusted to you with exemplary honesty, and unswerving loyalty. In the state purchases of jewellery for the Heir apparent, we have received huge saving almost a lac of rupees. Besides, you have executed all the orders of Queen Mother with respect, honour and love, and you have never abused the confidence or power vested in you.” (This Document has been signed and sealed on the fourth day of Kartak (Vad) S.Y. 1925, or 1869 A.D.)

Swift in thought and action, he could formulate his plans on the spur of the moment. He was indeed one of those individuals who combined theory with practice. The economic and social conditions of the Khojas in Junagadh was the most deteriorated in the whole of India. The social sphere of life was no less than a hopeless condition. The weak were buried under the machinery of the unjust economy. It was a chronic disease spreading day by day in the Ismaili society. The lower strata of the Khojas worked as the diggers of graves, barbers, porters, tiffin carriers, manual labourers, domestic servants and road construction workers. Sufficient reliable data is accessible in the voluminous writings that Ismaili Gangji felt deeply saddened by the ailing state of the Khojas.

To embark upon the mammoth task of reforms, one needs strength of resolution. Self-confident to face the challenge of the time, having insurmountable obstructions, he felt with ever more conviction that the reforms of his fellow beings had fallen to his lot. Being a profound and learned scholar, he was also blessed with the remarkable insight of a saga, he had no difficulty in locating the source which had shattered the social and economic conditions of the Khojas His first step was to find a solution for those who were at the most lowest class.

Ismail Gangji united them and knitted together with his well dressed personality with glorious manner and habit. He played an important role for the services of the Khojas of Junagadh and Kathiawar, he was in charge of settlement and their steady progress. He worked veritably like a brave lion in the community.

Ismail Gangji then turned to improve the worst conditions of the Khojas and he took few more firm measures to get to the root of their economic condition. The Khojas were to dig the graves. He himself was well aware, of this fact, therefore, he too once dug a grave. When this was reported to Nawab Mahabat Khan that his high minister had dug the grave, Ismail Gangji was summoned to the Nawab.

Ismail Gangji said, “None except the Ismaili Khojas are reserved for digging graves. I am also an Ismaili. What’s wrong in it?” The Nawab said, “Well, I agree it, but I cannot allow my minister to take part in this.” To this, Ismail Gangji boldly said, “But I will either do it as your ex-minister or give me your word that no Khoja will dig graves from today.” Nawab Mahabat Khan acceded to his proposal and issued his decree that the Khojas specifically would not dig graves and it would be consigned to the depressed class in the state.

Ismail Gangji centred his attention towards the common folk in the community. This problem was resolved different measures. There were few affluent persons in the community, whom he exhorted to venture into the wholesale business of vegetables, and supply to the Khoja retailers. Gradually, the labour class joined the business. These new reforms brought the Ismaili Khojas of Junagadh slowly into the middle and the higher economic classes of the society. It certainly marked the turning of the tide for them. The old proverb, “Khoja uthao boja” (Khoja! lift the load) denoting the era of poverty for the Khojas of Junagadh gradually came to an end.

After an end of the evening prayers, his servants searched daily for the new visitors or travellers and brought them for dinner. This tradition of hospitality continued till the death of his son, Kassim.

The great untapped reservoir of Junagadh's wealth was Gir and the Girnar forests. They formed the greatest natural attraction for all classes of first-class tourists, sightseers, wild game hunters and lion killers. As one enters the State from the north-east, the rock of Mount Girnar rises up from the plains around in one black granite block of phallic shape. The slopes, valleys and glades of Mount Girnar form the block known as the Girnar forests. While the Gir forest lies several miles to the east. This is a region of densely covered plains and low jungle-clad ranges of hills and constitutes what is called the Gir forests. The Girnar forest is 70 sq. miles in area, while the Gir forest covers about 500 sq. miles of Junagadh territory. The dense Gir forests are the only abodes of lions, and were a pet hunting ground for the nobility and native chiefs. Imam Aga Ali Shah was fond of hunting lion and tiger and visited Gir forest and Mount Girnar with Ismail Gangji.

In 1876, the State had only 25 Gujrati schools, 5 girls' schools, one Sanskrit Pathshala, one Urdu Makhtab and one high school. Under such condition, Ismail Gangji started some schools for the education of the Khojas. He also waged war against cruel customs, which had entailed ignorance upon females, and created prejudices against them in the minds of parents, who were grinding their daughters in the millstone of illiteracy. He strongly opposed to the artificial barriers, which debarred women from taking their rightful position in life.

He was a lover of knowledge and gifted man of literary genius, notwithstanding the pressure of work, which his duties entailed upon him, he always found time to read book, which included a wide range of subjects. He attended the annual majalis of Ganod, where he arranged an elephantine crowd. It was a significant quality of his oratory that once who heard him attentively, he became so impressed that he desired for next gathering with him. Ismail Gangji died On August, 1883 in Junagadh and a large number of the Muslims and Hindus joined in the funeral ceremony and paid glorious tribute. Nyalchand, the State Chief Officer expressed on that occasion that, "Saurashtra hero was waking Saurashtra void of an indispensable asset by his passing away."