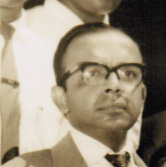 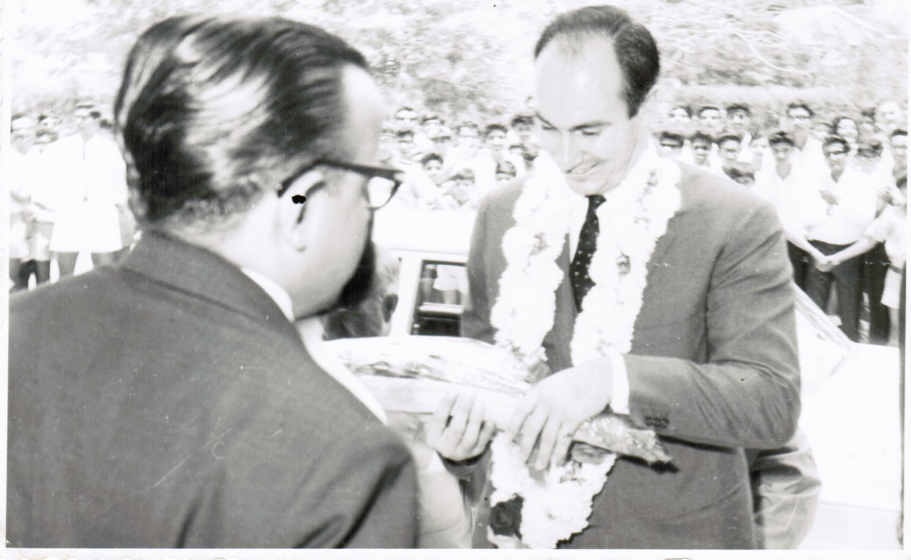 Hazar Imam with the Students 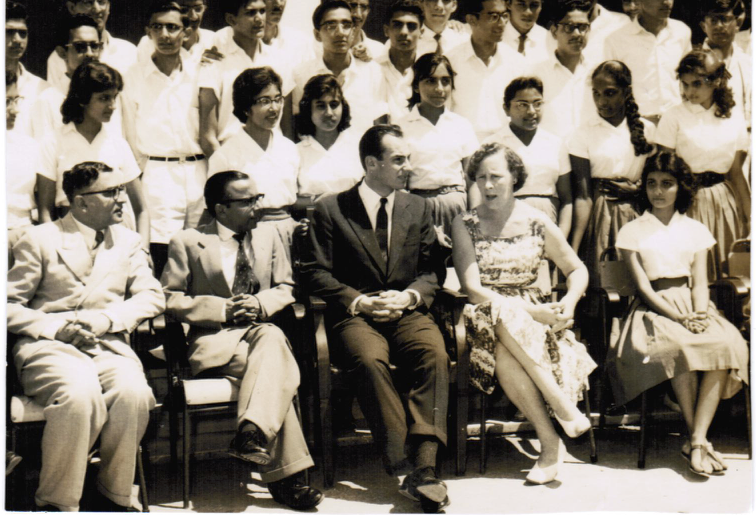 Ismail giving Hazar Imam a tour of the Biology Lab 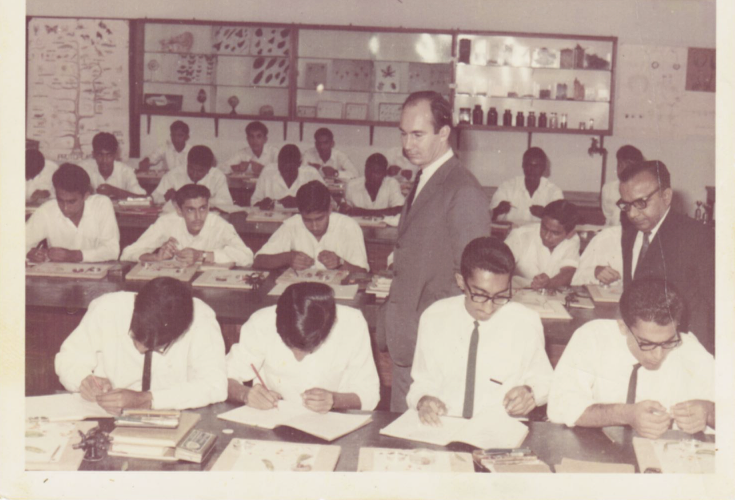 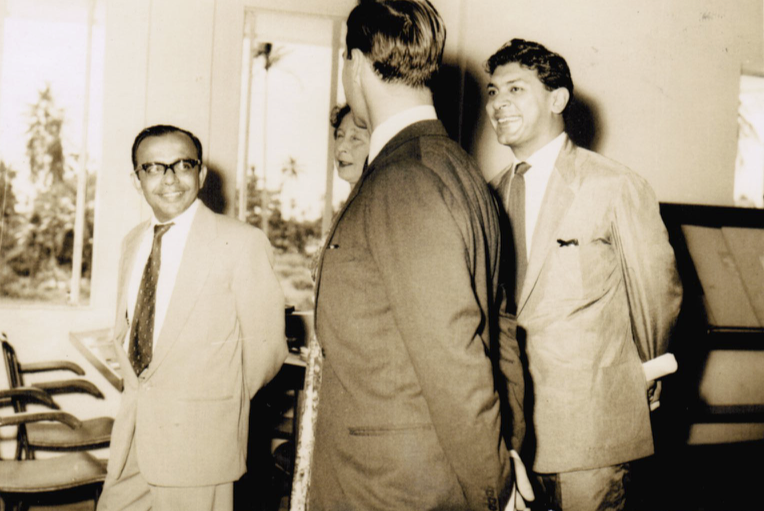 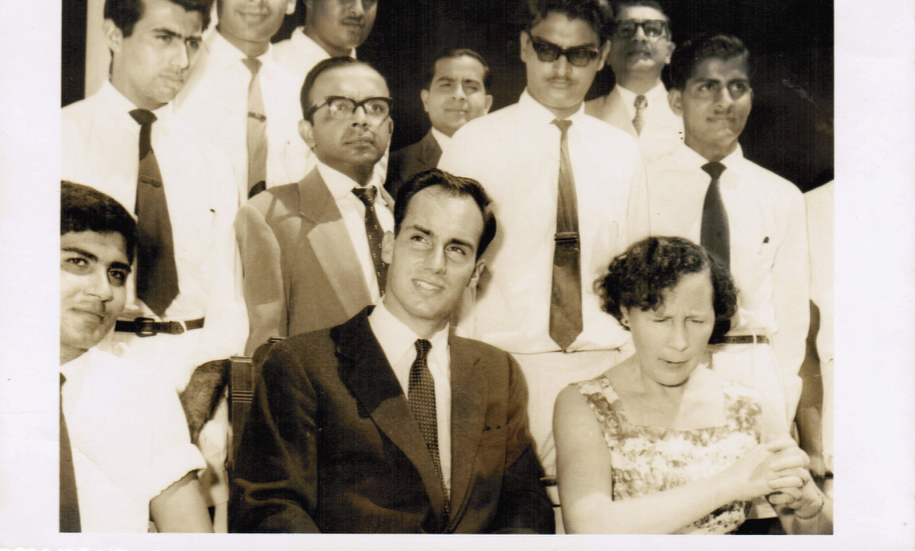 In DaresSalaam, Ismail’s family initially lived in Kichwele, then near the Darkhana Jamatkhan in an area known as "Khoja Mollo" – literally meaning an “area of Khojas”. After that they moved to a bungalow in Upanga, then back to town. Their house in town had no electricity. Ismail was passionate about education and would study under a street light outside in the evenings.

The family eventually moved to a house on Arab street near the Rex Hotel. This is where Ismail and his immediate and extended family lived for a long period of time. The house was known as "Wado Ghar" - literally meaning "Big House". More than the size of the house, "Wado Ghar" referred to the number of people living under one roof, being about forty people including Ismail's parents, uncles, aunts, cousins and siblings.

All of the extended family lived in total harmony and unity. Although the number of breadwinners in "Wado Ghar" were few and the family was large, their spirit of generosity has had a lasting impact on Ismail's family members. It was at this house that every Thursday the family offered food to the locals who needed it - locals would come to the verandah of the house for the meal.

During the Diamond Jubilee of Mowlana Sultan Mohamed Shah in 1946, relatives from all over Tanzania came and stayed at "Wado Ghar". All the aunts of "Wado Ghar" took turns making meals for the family. The family members were known as "Wade Ghar Wara".

Ismail attended Aga Khan School for Primary Education and Indian Secondary School for Secondary Education. From an early age, he excelled in his studies. At Indian Central School, he was often asked to go to the higher grades and talk about certain topics. He loved English Literature and could quote from any of Shakespeare's works.

After graduating from Indian Central School, Ismail was accepted to go to Wadia College in Poona, India to study Medicine. However, after just a year at Wadia College, during the Second World War, Ismail’s father called him back to DareSalaam.

On January 28, 1951, Ismail married Fatma. Their wedding was performed by Prince Aly Khan.

Fatma, Ismail, and the extended family lived together in a flat in Jiwan Hirji building near Darkhana Jamat Khana. Ismail worked for the Jiwan Hirji's family business. Fatma worked for a company called Clark Morrison.

In December 1953, Ismail and Fatma’s first daughter, Azizeh, was born. Azizeh was the first grandchild for Ismail’s parents. In the mid-1950's, Ismail was involved with the (Ismaili) Education Board that was responsible for all the Aga Khan Schools in the country. Education was a priority for him and he instilled that in all his siblings. He would look over their homework on a daily basis.

In March 1959, Ismail and Fatma welcomed their second daughter, Tasneem. The family lived together in Upanga by then, Flat # 150, Red Cross Flats. In the 1960s, Ismail was appointed Officer In Charge of the Aga Khan Boys Secondary School. His role involved hiring teachers, who were mostly expatriates, who could provide quality education to the students. He was also involved with the procurement of the supplies for the school including all the items for the Physics, Chemistry and Biology labs. It was during his term of office that A Levels was introduced to the school. Two months before the exams, Ismail decided to take the A levels with the first batch of students. Without having gone through the 2 year full time A level course, Ismail looked through the material over the last few weeks and passed all 4 of the A level exams that he wrote.

People from up country would come to Ismail's house in Upanga to ask him to write letters to the Aga Khan with their problems/issues. Ismail would start dictating and the letter just flowed. When the people would get the replies, they would again travel to DaresSalaam to show Ismail the response, so he could explain it to them.

Over the years, many students and parents came to see Ismail at home for career advice. Ismail would look at the Report Cards, talk to the students and advise them accordingly.

Ismail was appointed to the Territorial Tribunal Council of Tanzania which was similar to the present day Conciliation and Arbitration Board. Ismail worked at the American Embassy, USAID branch.

Ismail had very good debating skills and took part and organized events for the Former Boys Association. He also participated in the debates organized by the Cultural Society of DareSalaam, which were held in Cinema theatres. At one of the debates that was held at the Empire Cinema, he won the Trophy for the best speaker, beating Mr. Greenshaw, a British teacher at the Aga Khan School who was an excellent orator. The audience cheered for Ismail! Ismail also produced plays for the Annual Youth Drama Festival, a competition open to all High Schools in Tanzania. With his production skills, and the acting skills and practices of the Boys School students, they almost always won the Trophy for the Best Play, Best Actor, etc. The “Importance of Being Earnest” was one of the numerous plays that Ismail produced. This play was incredible with the props, the lighting, the costumes and the acting.

In 1971, due to Ismail's ill health, he had to leave Tanzania urgently with his family for emergency surgery at Kidderminster Hospital (near Birmingham) in England, where his brother Dr. Shiraz was working. Ismail’s sister Mehrun, who was a nurse, accompanied them on the flight. At the same time, the Tanzanian government had begun the process of nationalization. Businessmen lost their businesses and no one could leave the country with foreign currency. Ismail, Fatma and their two children left as tourists, with return tickets, so were only allowed to bring $400 each. After the surgery and a short stay in England, the family moved on to Toronto, Ontario settling in the Don Mills area.

Ismail’s family was part of a group of "Ismaili Pioneers" in Toronto. In December 1971, there were only about 50 to 75 Ismailis in Toronto. As new families started arriving, the "Ismaili Pioneers" helped them find accommodation, assisted them with job search, etc. In 1973, Ismail was appointed Chair of the Aid Fund committee with Zaher Lalani as his Secretary, and in 1981, Ismail was appointed Chair on the Editorial Board of the Canadian Ismaili.

Ismail loved to spend time with his grandchildren. His grandchildren were blessed that they got a few years with him, and remember him fondly to this day. Ismail passed away suddenly at his daughter Tasneem's house where he and Fatma had gone for a couple of days before the Victoria Day weekend in 1993.

His legacy of service, kindness, compassion, generosity and the pursuit of education will continue through his daughters, son-in-laws, grandchildren and their families.