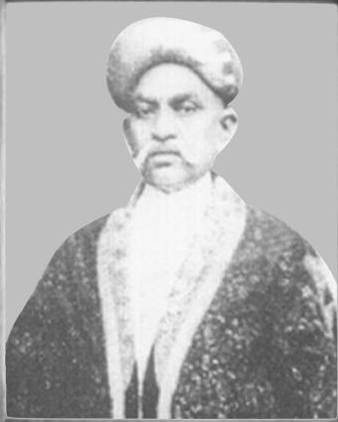 Jivabhai Bhanji traced his lineage from a certain Bhagat Virabhai Devasi, who lived in the beginning of 15th century in Kathiawar. Paraptani is said to be his only son, and his son was Parpiya. Karim was the younger son of Parpiya, and the son of the former was Bhima, who also lived for some time in Mundra, Kutchh with his son Hamid. The next generation followed by Hamid was Bhanji, who passed a hard life in Kathiawar in poverty with his two sons, Jiva and Kassim.

Jiva, the son of Bhanji was born on Monday, January 1, 1866 in Upleta, Kathiawar, where he acquired a formal education. Reduced to an extreme poverty, he was determined to try his fortune in different places. He roamed from one city to another till he reached Calcutta after three months. In the meantime, a certain tourist from Burma advised him to proceed to Rangoon for better prospect. He sailed for Rangoon at an early age of 14 years in 1880.

No sooner had he reached at Rangoon sea-port than he feared to enter in the city. He passed three days in dilemma around the port. His pitiable condition soon disappeared when he made contacts with some Indians, who arranged his lodging in the city and helped to find his job. Jivabhai Bhanji first worked at the shop of a certain Memon merchant for three years. Upon termination of contract, he opened his own small grocery shop, toasting pulses and grams in 1883. He worked hard till steady progress in Rangoon. Like other Ismailis and Indians, he gradually dominated the retail business, which has been also mentioned in 'The Encyclopedia of Islam' (London, 1960, 1st vol., p. 1333) that, 'Ismailis (Khojas) and Gujratis dominated the retail trade in Burma.'

The British occupied Burma in 1885, and annexed it with Indian empire as a province on January 1, 1886, and appointed their own Commissioner. With the political upheavals, most of the Indian merchants left Burma. In those days, there were handful Indian Ismailis in Burma, who started the first Jamatkhana in Rangoon in 1889 at Mughal Street.

Having laid a firm foundation in his retail business, Jivabhai Bhanji called for his brother, Kassim from Kathiawar to help him. He ventured into a wholesale transactions of different varieties of grain, and imported them from India. He became a business magnate and began to be counted in an affluent class of Rangoon. He also established a flour mill in 1918, known as The Bombay-Burma Flour Mill, which was renamed as The Union Flour Mill after 1946. Besides, he was also an importer of the grains, ghee, oil and spices from India. He was also a commission agent of Liver Bros. for the soaps and Zeeyawadi Sugar Mills for sugar. He was also an owner of two other grocery shops in Rangoon.

It is said that Jivabhai Bhanji visited Kathiawar for the first time after his arrival in Burma in the middle of May, 1900 to see his family. Jivabhai Bhanji was appointed as the Mukhi of Rangoon Jamatkhana in 1904 in place of Mukhi Ramji with Ibrahim Virji Ismail as his Kamadia.

The first Ismaili Council for Burma came into existence at Rangoon on January 8, 1910, whose first President was Mukhi Jivabhai Bhanji with Khatau Fadhuani as its vice-president. It comprised of six other members - Mohammad Jasraj, Alijah Ali Mohammad, Mohammad Ku'narji, Ismail Hakimji, U Kan Gyi Nanji and Ibrahim Kamadia Virji, who represented the then 500 Ismailis spread in Rangoon, Mandalay, Prome, Bassein, Pyaubwe, Toungoo and Tavoy.

Mention should be made of Alijah Ali Mohammad, one of the members of the Council in Rangoon, arranged a dinner party at his bungalow on March 27, 1921. He mostly invited the elder leaders, - Mukhi Jivabhai Bhanji, Alijah Alibhai Hakimji, Baghwan Mukhi Mehr Ali, Walji Ahmed, Fajula Mukhi Nanji, U'Kan Gyi Nanji, Ismail of Goa & Sons, etc. Alijah Ali Mohammad addressed the audience and spoke of the measures to be taken for the progress of the Ismailis in Burma. Mukhi Jivabhai seconded his proposal and after a long discussion, it was resolved to establish The Burma Ismaili Trading Company to help the small dealers and poor Ismailis. Each leader declared their individual contribution and a sum of Rs. 4,00,000/- was raised as an initial capital, wherein the contribution of Mukhi Jivabhai was Rs. 75,000/-

The occasion of Thursday, March 8, 1934 must be marked a historical day for the Bhanji family when the marriages in Bhanji family were also performed in the Jamatkhana after didar. It was the marriages of Rai Abdul Aziz and Rai Jumabhai, the sons of Mukhi Jivabhai and Akbar Ali and Noor Banu, the son and daughter of Kamadia Kassim Bhanji.

Mukhi Jivabhai Bhanji expired in the early morning of Thursday, September 15, 1938 in Rangoon.