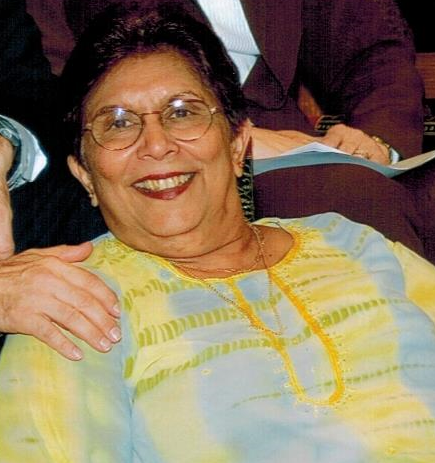 Ms. Mawji with her VW Beetle 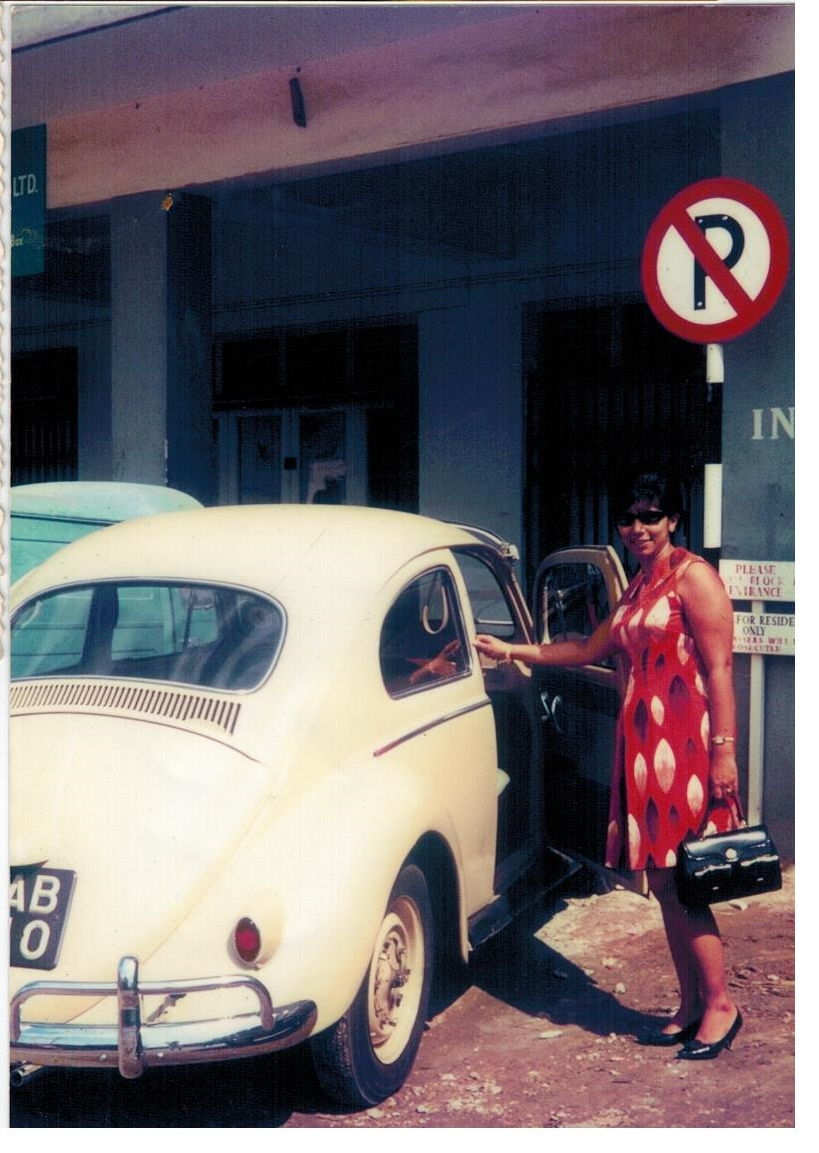 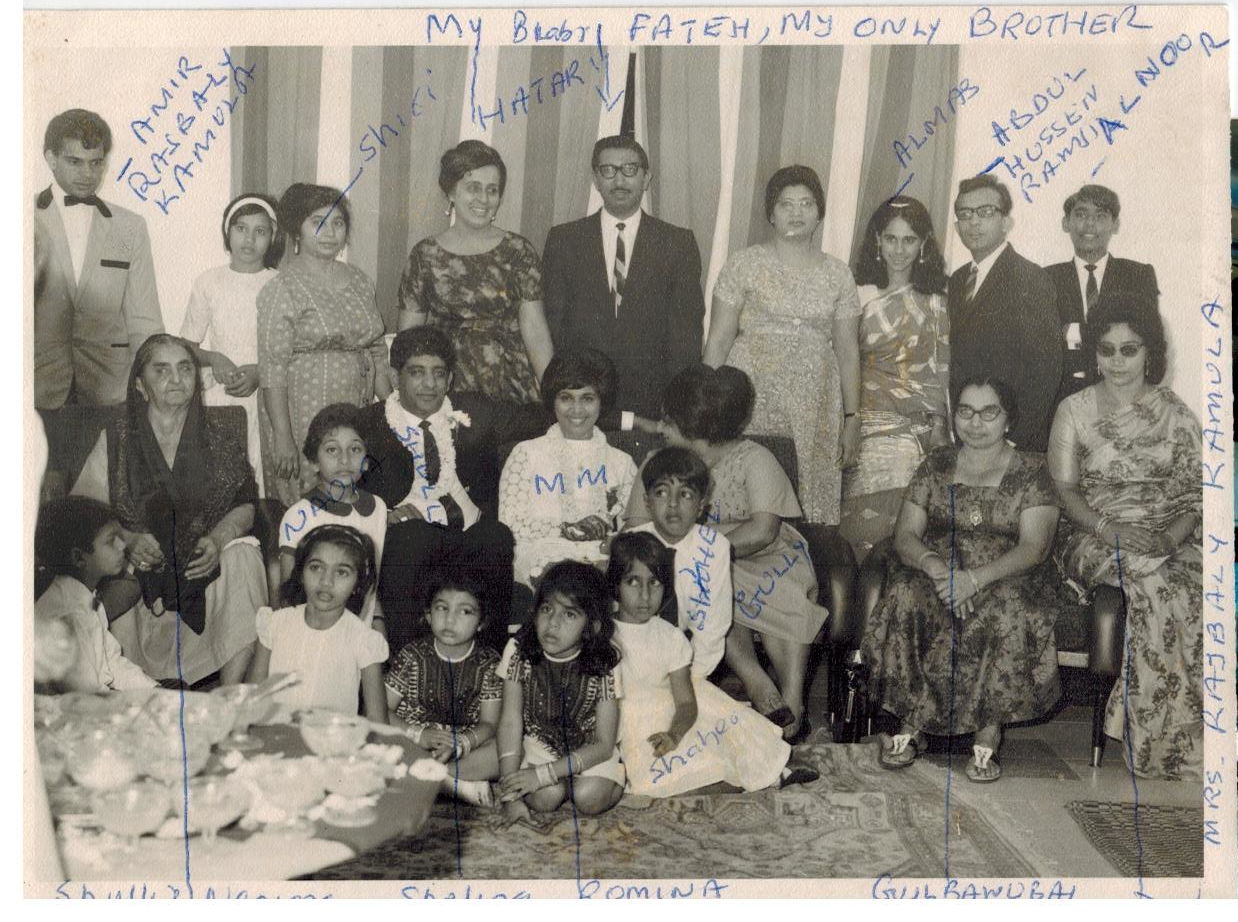 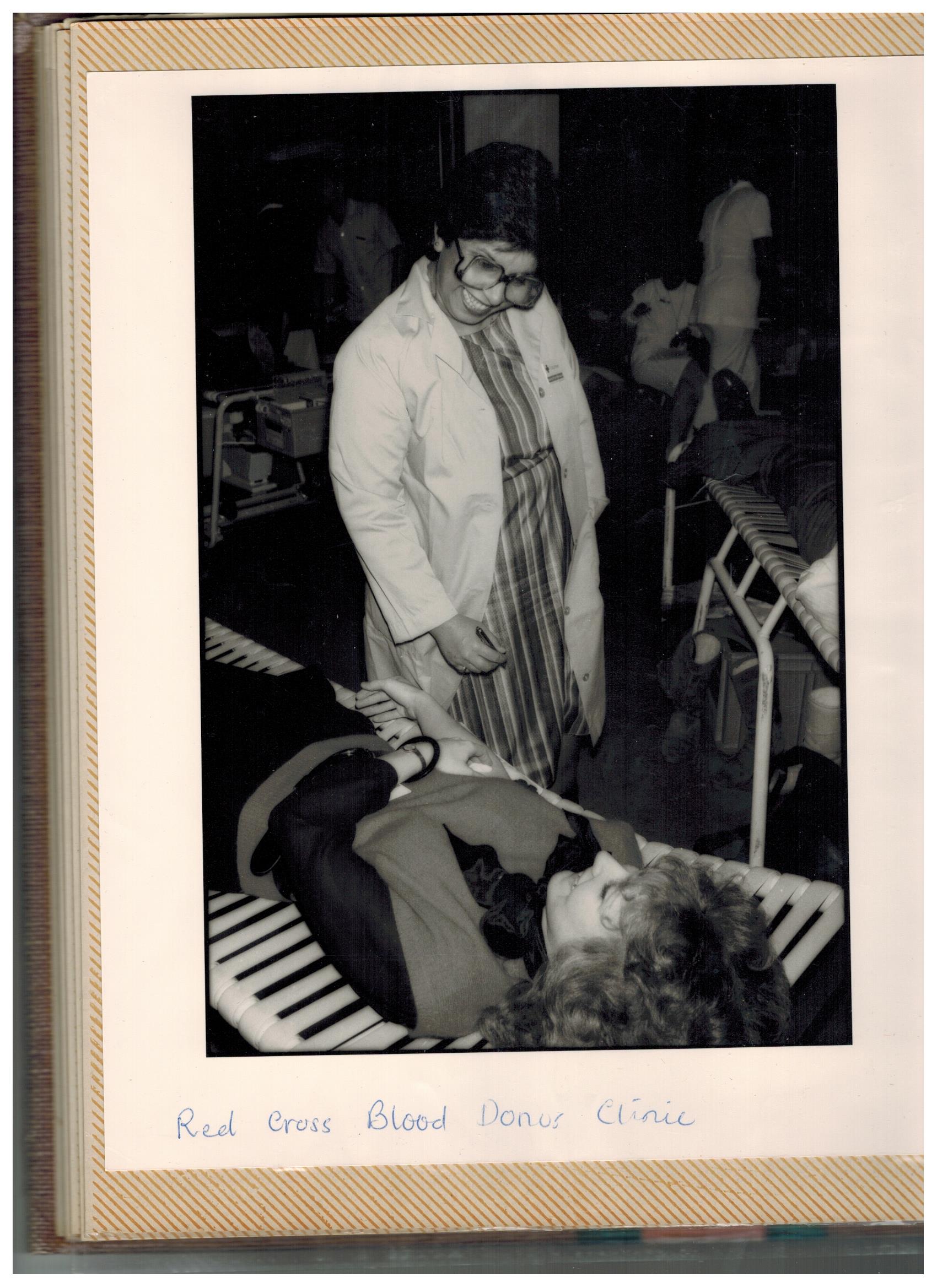 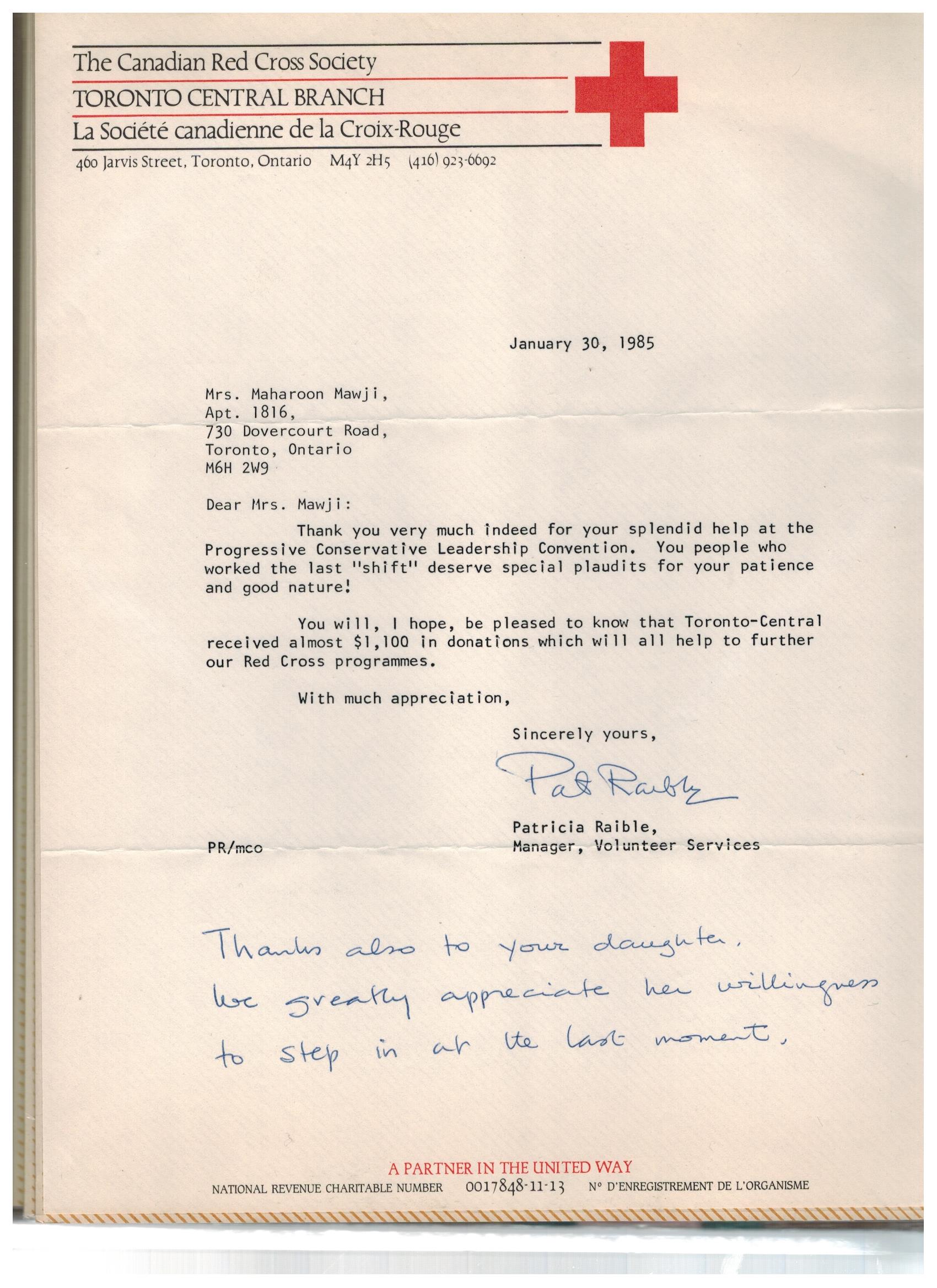 Maheroon Shully Jaffer Mawji claims she is a “flirt”- she has been flirting with all the great opportunities of life that her good fortune has offered her.

Growing up a sassy teenager in comfy, colonial Dar es Salaam;followed by an exclusive experience as an international student in London, England of the 50’s; being the pampered wife of a prominent “lifist” businessman in the young Tanzania and finally, for the last 20 years, as a fun-loving, party-going junior-senior in cosmopolitan Toronto. And in that life journey, Maheroon has been a trailblazer amongst the Khoja, being an example of how women can live a life of vigour, within a closely-knit but progressive community.

Maheroon was born in Dar es Salaam, one of the 8 children of a Kathiawari settler in Tanganyika, who had established a thriving rations grocery store in a prime retail area opposite Toy Shop Store on Morogoro Road. She lost her father when she was only 9 years old and she just couldn’t understand what that meant. Her parents had been planning a trip back to Jivapar to visit their relatives when her father suddenly fell ill and died shortly after leaving the family in turmoil. Because of her father’s illness and because her siblings were also young, the family was forced to give up the store After some time, the merchant, named Jiwan Jeraj, who had taken over their store, was generous enough to return the store to her brother and sister, Guli, who ran it for a decade. It was an act of generosity that influenced her to be generous throughout her life. Maheroon remembers how she helped her mother to chaki pisse- the stone grinder used in Indian stores to grind daal,flour etc. to sell at their grocery store. Maheroon also remembers running a mini stationery and confectionery store in the front verandah of their house of Stanley street opposite the Khalid Restaurant. 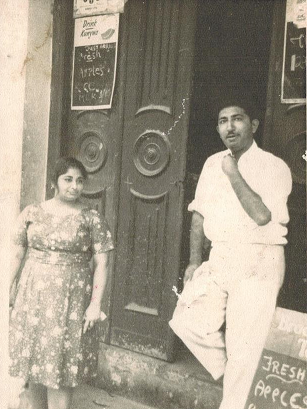 Because she was raised mostly by her siblings, she was allowed to develop a strong independent personality and her early experiences shaped her tough character. She says she was “difficult” and used to getting her way. As an example, she points out that in 1957, when most Khoja women were still “restricted ”, she had her own car, a VW Beattle “DSF 297” (the number plate rolls off her tongue easily as if it was yesterday!)

After completing high school at the Agakhan Girls on Mosque Street location, her siblings pooled savings and sent her to Hampstead, UK for studies at a prestigious college for an Executive Assistant training with a condition that she would, in turn cover the costs of her younger sister’s further education. Her UK bound flight stopped in Benghazi and Maheroon sat in the plane the whole time fearful of being “kidnapped” by some fierce-looking Libyan!

In London, Maheroon remembers many private parties; especially the “Ismaili Ball” (dinner and dancing party) at the Savoy Hotel and also dancing at the famous Hammersmith dance clubs with the live bands. In those days, the girls were quite shy (some had been told before leaving home that kissing a boy would make them pregnant!) Maheroon, however was a confident young woman and that helped her secure a job with General Electric (GE) in London, where she worked for 1 1/2 years getting further valuable experience. 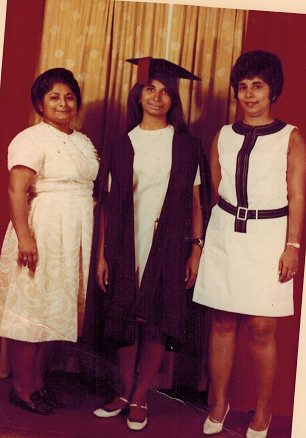 Later, an offer of lucrative expatriate terms persuaded Maheroon to return to Tanzania to work for a sister company of GE, called Gailey & Roberts in Dar es Salaam. Maheroon now lived the fun and carefree life of a young professional and that's where she met her lifelong soulmate, Shully Jaffer Mawji, of the Kilimanjaro Ice Cream Factory family. After a whirlwind courtship, she married Shully in 1967 and until 1983, they together spent a wonderful time socialising, travelling and enjoying the trappings of good life in Tanzania. She remembers dancing parties at the Goans Institute, swimming galas at the Kilimanjaro Hotel, late night discos at Banda Beach Hotel and many. Many picnics at their own family beach house at Kunduchi, (where they could jump off the roofntop directly into the warm Indian Ocean, she says).

Shully had a friend in Nairobi, Samson Muriithi, (whom he had once randomly helped with a small 500 shsgs loan and who had later become very wealthy) and so the Mawjis were his frequent guests in Nairobi and never short of spending cash despite foreign exchange restrictions in Tanzania. Shully had suffered from childhood epilepsy but in Nairobi, Samson arranged for an Italian specialist, who cured him and Shully was finally was permitted to drive cars. 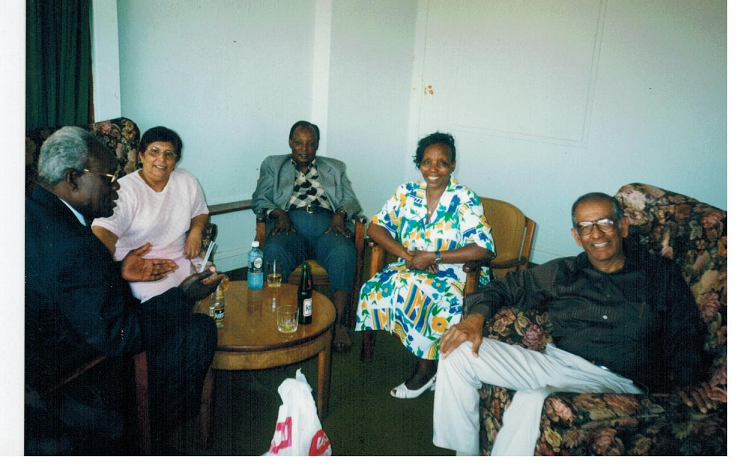 With friend, Simon Muriithi in Nairobi

In 1983, political turmoil lead to the temporary detention of Shully's brother, Piloo and the Mawji’s decided it was time to leave the country. They arrived in Canada as immigrants and joined a family hotel business. When that did not work out, Maheroon and Shully found themselves in financial difficulty, until a Toronto real-estate brokerage saw the potential of the husband and wife sales team- he paid for both their training and the Mawjis became a household word in the Khoja community in Toronto for residential real estate. 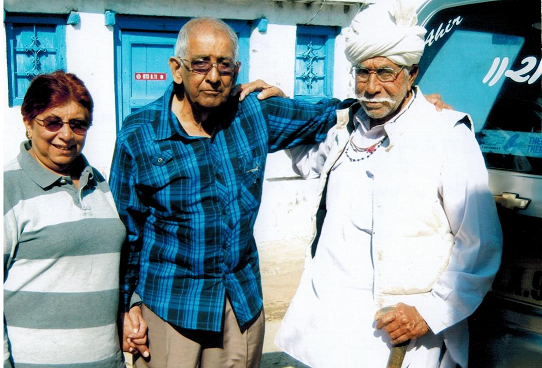 In Toronto, Maheroon was known as the soul of any party she went to. She danced, sang and played the jolly bringing laughter and friendship to all her contacts. But there was a much more dedicated and serious side of her- that of a civil society volunteer in the various health societies. etc. The certificates she received over the years attest to a life dedicated to social causes.

Shully died in 2011 during a fun trip to India and Maheroon now lives in comfortable retirement with her two children and three beautiful grandchildren close by.

At Khojawiki, we wish her many years of mirth and good health.