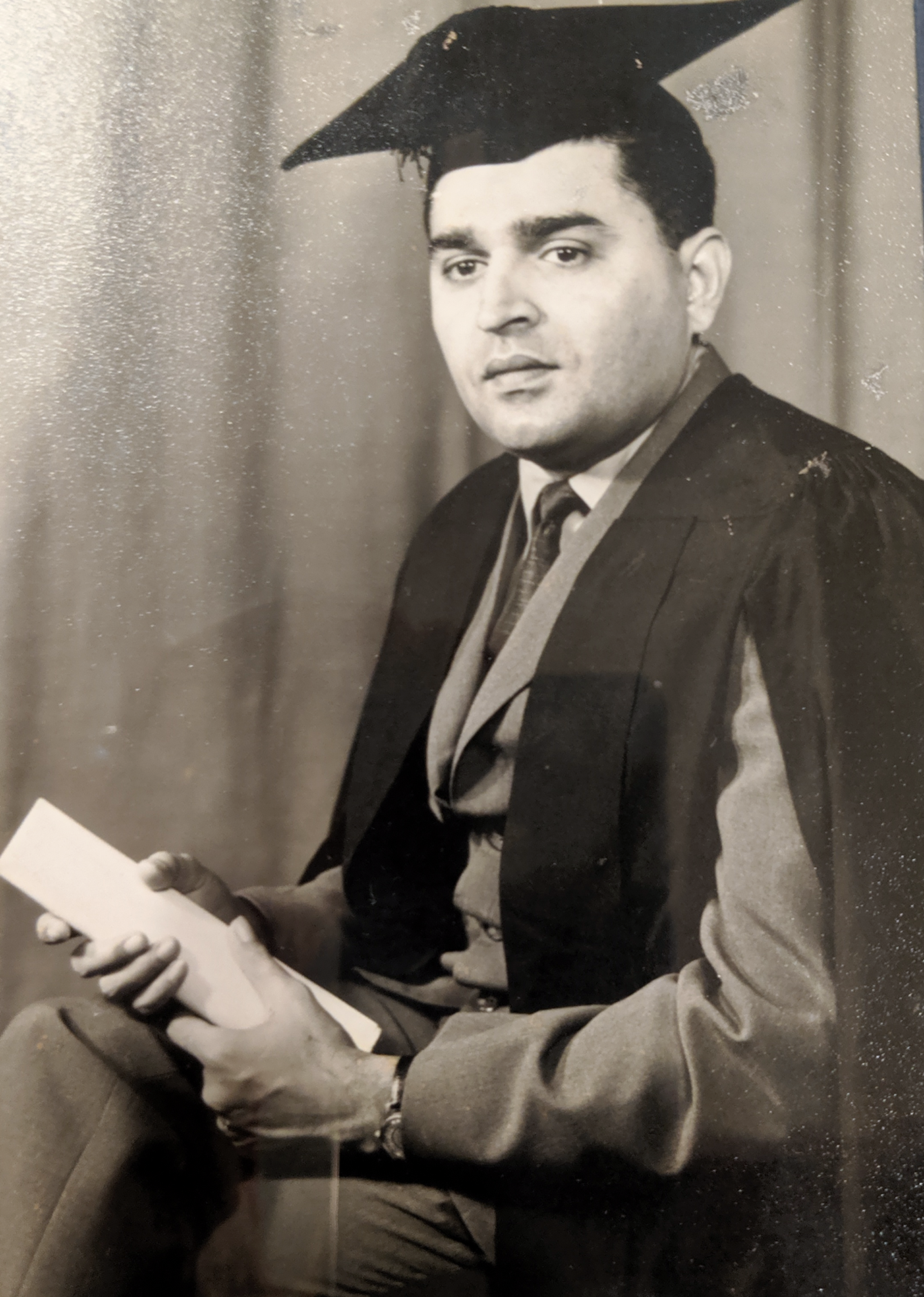 The Sumars of Lindi, Tanzania

Mohamed Ahmed Sumar’s life story and of the four generations of the Sumars mirrors the experience of all Khojas through their six centuries of entrepreneurial and migratory history demonstrating a willingness to take risk, an openness to change and a tenacity to succeed.

It is also a period of the Khoja diasporic history when members of the two sects, the Khoja Ismaili and the Khoja Ithna-sheries, were able to maintain their caste ties though intermarriage and social contact whilst freely observing their respective religious obligations within their joint family structures. This tolerance was possibly due to their common Hindu heritage where one is still likely to find members of a family living under one roof but following different faith traditions.

Mohamed Sumar’s grandfather Abdallah Sumar Merau was born in 1887 at Mundra, Kutch although the Sumars were said to originate from a district called Merau near Mandvi. As a youth, he worked on a “vadi” or the family farm and when of age, he was married to Sonbai Kassam, of Bhuj, Kutch.

In about 1925, Abdallah Bhai migrated to Africa with his family including his son, Ahmed, landing first at Zanzibar and later moving to work for Mohamed Jaffer, a well-known Lindi trader who assisted new migrants and often employed many of them in his shop. As was the pattern, Abdallah Bhai worked for his benefactor until he proved his worth and was rewarded with supplies and funds on loan, to establish his own little “kaduka” - a small ration store in the bush in the village of Mingoyo, about 20 km inland from Lindi where he built a traditional Swahili type house. It is a credit to both to hospitality of the local African tribes and to the dogged tenacity of the Dukawallas that he could do that in safety. He prospered and returned twice to Bhuj, once when one of his sons, Mohamed Sumar Merau fell ill with smallpox and later when he died, in October 1932.

As was expected of him, he sent for his younger brother, Juma Sumar Merau from India who also lived in Mingoyo until he passed away. Juma’s son, Gulam Juma Sumar Merau continues to live in Tanzania.

Abdallah Bhai and his wife, Sonbai were both Shia Muslims of the Ismaili sect before coming to Africa but then opted for the Shia Ithna-Asheri branch which was more prevalent in Southern Tanzania. Such conversions were not uncommon within the large Muslim community in the tolerant and pluralist Tanzanian society. He lived in Mingoyo until 1961 and only moved back to Lindi after his wife, Sonbai passed away. He died a few years later in 1964.

Mohamed Sumar’s father, Ahmed Sumar was 15 when he came to Africa with his father and went into retail trade as soon as he was apprenticed. With help from Abdallah Bhai, he opened his own shop in an even smaller village, Mtama about 40 km from Mingoya and closer to the large German Catholic Missionary Hospital and School at Ndanda. He sold general food stuff which he bought from the local farmers market and clothing materials like kaniki and merikani imported from India.

As his business prospered, Ahmed Bhai went on to marry, in 1930, Kulsum Ismail Patel, also from Mundra, Kutch. Kulsum Bai was also born an Ismaili but changed to her husband’s sect after marriage. Her two brothers whom she called to Tanganyika once she was settled after her marriage, Rajabali Ismail Patel and Ahmed Ismail Patel, both remained as Ismailis. Ahmed settled in Ruangwa near Lindi whilst Rajabali moved away to Bagamoyo. The family ties were strong enough that whenever they visited Lindi, they stayed with their sister and also went to the Ismaili Jamaat Khana in Lindi daily.

With health care and education in close proximity, Kulsum and Ahmed started their family which eventually grew to eight sons and three daughters.

After the end of WWII, in about 1950, the British Government imported hundreds of decommissioned solders to Tanganyika to set up a large groundnut scheme near Mtama. Although this was a great boost to local trade, the project was short lived as the groundnut scheme collapsed in about 1952 and most of the soldiers left Tanganyika, some leaving debts with the shopkeepers. Business became harder to do in Southern Tanganyika.

As Ahmed’s children grew older, he sent them one by one to his father house in Mingoyo, where there was an Indian Primary School. Eventually, the number of children living with his father grew so many that he could not manage and Ahmed moved with his family to Lindi for the sake of their education. This was typical of the Khojas of this era that they endured separation from young children or took business risks to move towns in order to provide education for their children

Mohamed Sumar completed his primary education at Mingoyo and then went to the Indian Public School in Lindi. The British were mandated by the League of Nations to provide for local education in the Trust Territory of Tanganyika but in keeping with their policy of divide and rule, they promoted racially segregated education, with Indians being further divided into parochial religious schools like the Agakhan Schools for Khoja Ismailis and the non-sectarian Indian schools for the others.

Some of Mohamed's early school mates stand out in his memory - Mohamed Gulamhussien Pardhan, whose father had shops in Lindi & Songea and who later became a lawyer and returned to practise in Lindi in partnership with Yusuf Linani. Yusuf who had migrated from Mumbai was both Ithna-Asheri and Ismaili, going to both the Mosque and Jamatkhana for prayers, something not uncommon in those times in southern Tanganyika since the difference between the sects was not emphasized nor noticeable within the Khoja caste. Mohamed recalls that Yusuf also had three younger brothers, who went to the Indian Public School with him.

After completing high school, Mohamed desired to go to United Kingdom to study law but his father did not have the means and his grandfather was unwilling to assist if he choose law (lawyers are thieves, he said!). So Mohamed took a loan of 4000 shillings from Abdallah Bhai and went to study at the Royal College, Nairobi (later Nairobi University, a college of the East African University). Amid stiff competition, he qualified to study and graduated as an architect in 1963 and after getting his professional license, joined the British firm of French & Hastings in Dar es Salaam, the capital of the newly independent Tanzania.

In April 1970, when many Indians were leaving the country, Mohamed, acting against the grain, opened his own architect firm called “Sumar, Verma & Associates” which he ran continuously until his retirement in 2017. Picture Left: Mohamed at a reunion of the Royal College, Nairobi)

Following the nationalization of banks in 1967, Mohamed, to his immense pride, oversaw the expansion of the new Tanzanian Bank's retail branches across the country in order to reach the rural population.

In the 54 years of his professional life, Mohamed's firm has successfully completed some 800 projects including commercial, industrial (paper-mills), educational (university campus, schools and hostels), residential (diplomatic missions) properties. In fact, the largest tower in the country at that time, a 26 storey building now called Benjamin Mpaka Towers was designed by his firm. ﻿ During this period, Mohamed Sumar has been an exemplary citizen of the country of his birth. He was appointed by the government to many national Boards and Councils including National Construction Council, National Council of Antiquities, National Engineering & Design Company, Ardhi Institute (School of Architecture). As a respected civic leader, he has been elected as President of both the Association of Architects of Tanzania and the Rotary Club of Dar es Salaam North.

In a unique honour, the Agakhan appointed him as a Board Director of the Aga Khan Hospital, Dar es Salaam.

In 1963, Mohamed married Shirin Alidina Khaki of Lindi. Her grandfather, Alidina Walli Khaki and his wife Manbai had lived all their lives in Lindi with the entire Alidina family including their son Mohamedali (Mamadh Bhai) and three grandsons – Kassamali, Fidahussein and Haiderali and four granddaughters – Fatubai, Shirin Gulshan and Zarina.

The Alidina’s were also a mixed faith family. Although all Alidina family members joined the Shia Ithna-Asheri sect, Manbai herself remained an Ismaili all her life. She was a legend at the Lindi Jamatkhana where her grandchildren took her daily in a motor car, the Alidinas being one of the very few families to own an automobile in Lindi.

It is matter of family pride for the Alidinas that when Manbai died in 1961, her son and grandsons resolved and were allowed to carry out all her final rites in the Lindi Jamatkhana and at the Ismaili cemetery.

Shirin and Mohamed have three daughters all of whom are educated to university level and professionally engaged in Canada. They have continued Mohamed’s tradition of civic work considering the old Khoja tradition of sewa as an essential attribute of their citizenship. Shirin has been in a leadership position for some 40 years within the community as well as mainstream senior citizens groups in Toronto. For the past 21 years, one daughter has been running one of the largest homeless shelter programmes in York Region, Ontario whilst another works with children. A third is active in volunteering and leadership within her Toronto Jamaat.

The Sumar family journey, whilst remarkable in itself, is repeated across the spectrum of the Khoja diaspora where each generation has taken advantage of opportunities whether in the birth country or across the oceans whilst also contributing to their society.

In her work on philanthropy in East African by Indians, scholar Margret Frenz describes this as “Doing Well But Also Doing Good”