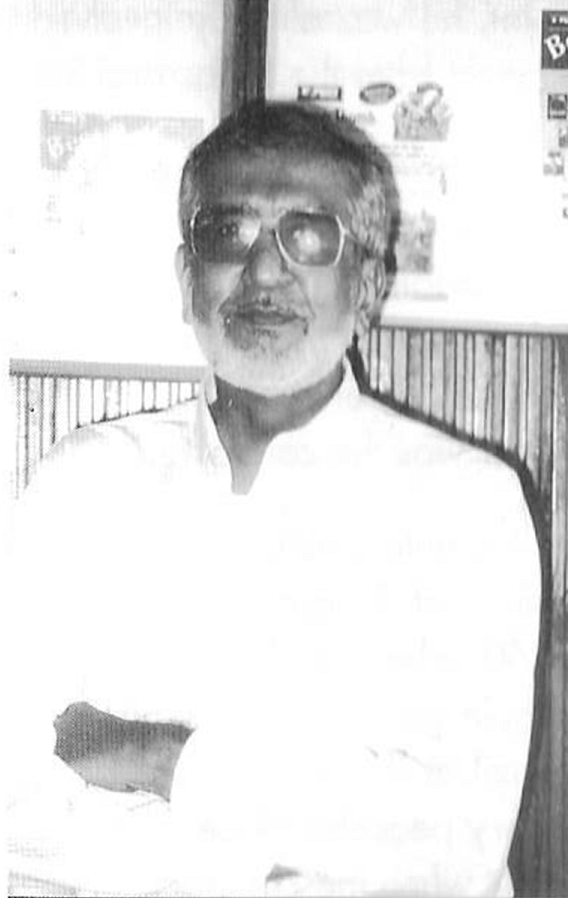 My mother's grandfather, Ismail Bhallo, came to Bagamoyo from Jamnagar in the 1880s. He came by dhow with his six children, 4 boys and 2 girls. His wife had expired.

Ismail Bhallo later moved to Dar to start up a business. All his children got into business when they grew up. One migrated to Burundi and another to Mombasa. My grandfather and his older brother remained in Dar. My grandfather died when my mother was 4 years old during World War I. His wife died a few months later. The orphaned son was raised in India by his mothers relatives and the 4 daughters were raised by my grandfathers brothers, here in Dar. The person who raised my mother, Ibrahim Ismail Bhallo, was an estate agent in Dar.

My wife and I come from the same family, our mothers are sisters. My wife's paternal great grandfather, Nazaralli Remtulla, came with his son to Africa. I hoy travelled by foot from Bagamoyo to Tabora and settled there. It took them between 10 to 13 weeks to walk to Tabora. My wife's grandfather, Mohamedally Nazarally, built many of the stone houses in Tabora and also had the first soda factory there. Grandfather lived in Tabora until 1934 (he was approximately 40 years of cige at this point) and then moved to Zanzibar. In those days the best education and the largest number of Asians was in Zanzibar. His son, Husein, was educated in Zanzibar, he was one of the few Asians who completed Senior Cambridge in around 1930. Husein, my wife's father, was employed by the government in the high court. At the time of his retirement he became the registrar with honours from the British Government and was awarded an OBE.

In the 1 950s, the Wanyamwezi (name of tribe) in Tabora found a way around the British ban on formation of political parties. They formed a Taorab (Zanzibari music) group and it was there that they discussed politics. Unfortunately most of the members were not educated in English, and N/erere was the perfect person to help them draft letters, and guide the discussions and debates they were having. Nyerere moved to Dar in 1953 and worked as a teacher at Pugu Secondary School. At this point, he was already involved in the political struggle for independence and got support from the Sykes and Rupia families.

When the political party of TANU was registered in 1 954, the first office in Tabora was opened next door to my father's house. My father would give support by providing beds and mosquito nets when Nyerere visited. Most political rallies in Tabora were held on the grounds belonging to my family which is still called Bachoo grounds, after my father. Actually, the grounds belonged to my father-in-law, my father was the caretaker.

Up until 1960, people were confident that nothing adverse would happen to the Asians of Tanganyika at Independence. It was only after the Congo upheaval in 1960, when the Asians saw the white refugees deported from Belgian Congo, that people got scared. Because of this upheaval, some Asians made plans to move to Zanzibar if there was any trouble on the mainland. Zanzibar was considered to be a very peaceful place. At and after independence everything went peacefully until 1964 when the Zanzibar Revolution took place. Soon after that, there was a mutiny on the Tanganyika mainland, and this is when people were very frightened. After that, between 1962 and 1967, came the Africanisation policy where all the government posts held by non-indigenous Tanganyikans were given to Africans though some Asians were kept in certain posts like the railways and schools. Since the working class Asians, mostly civil servants, no longer had jobs, they left the country and went to live in the United Kingdom and Canada.

I moved to Dar in 1972. In 1973 the government announced that all small businesses conducted by non-indigenous people, in villages, should be taken over by indigenous people. Most Asians sold or gave away their businesses, they could no longer operate since the government would not issue them with business licences. Nationalization resulted in a massive movement of Asians: people from the towns moved to Canada and the UK, and people from the rural areas moved to the main towns of Tanzania.