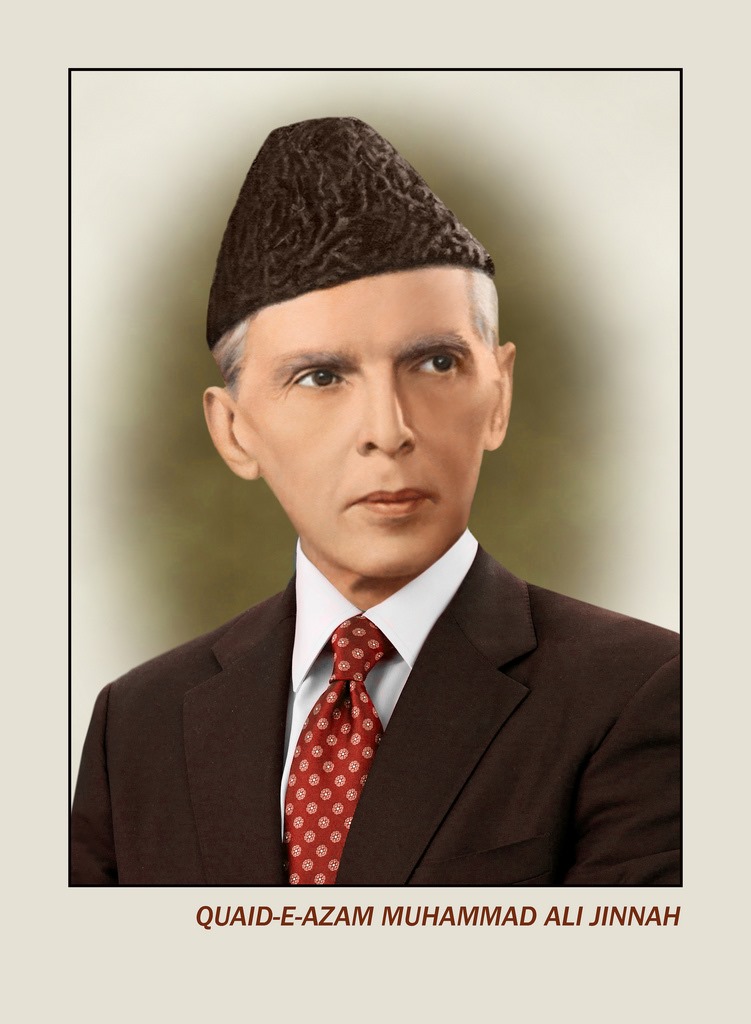 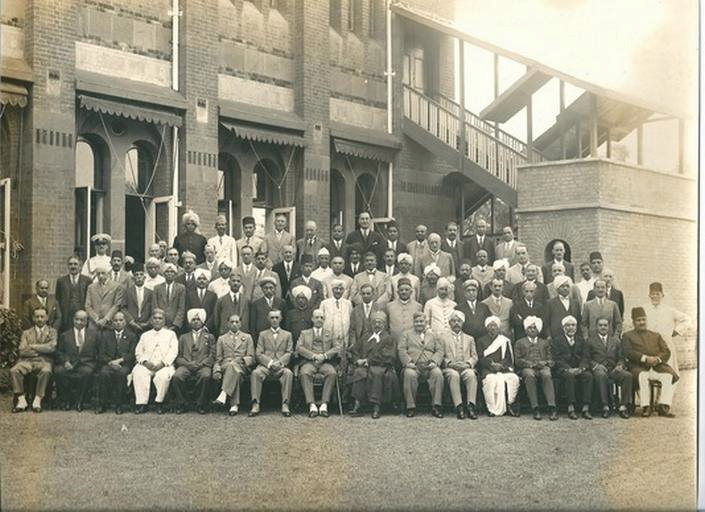 Adapted from: Wikipedia, the free encyclopedia

Jinnah was born Mahomedali Jinnahbhai in a rented apartment on the second floor of Wazir Mansion, Karachi. According to a Pakistani Author, Jinnah once said that his male ancestor was a Rajput from Sahiwal (Punjab) and had settled into Kathiawar (Gujarat),

His father was a prosperous merchant who had been born to a family of weavers in the village of Paneli in the princely state of Gondal (Kathiawar, Gujarat); his mother was also of that village.Jinnah's family was of the Ismaili Khoja branch of Shi'a Islam,though Jinnah later followed the Twelver Shi'a teachings. Jinnah was the second child;[11][12] he had three brothers and three sisters, including his younger sister Fatima Jinnah. The parents were native Gujarati speakers, and the children also came to speak Kutchi, Sindhi and English.

In 1892, Sir Frederick Leigh Croft, a business associate of Jinnahbhai Poonja, offered young Jinnah a London apprenticeship with his firm, Graham's Shipping and Trading Company.[19] He accepted the position despite the opposition of his mother, who before he left, had him enter an arranged marriage with a girl two years his junior from the ancestral village of Paneli, Emibai Jinnah. Jinnah's mother and first wife both died during his absence in England.Although the apprenticeship in London was considered a great opportunity for Jinnah, one reason for sending him overseas was a legal proceeding against his father, which placed the family's property at risk of being sequestered by the court.

Soon after his arrival in London, Jinnah gave up the apprenticeship in order to study law, enraging his father, who had, before his departure, given him enough money to live for three years. Dissatisfied with the law, Jinnah briefly embarked on a stage career with a Shakespearean company, but resigned after receiving a stern letter from his father. In 1898, at age 19, he became the youngest Indian to be called to the bar in England. Jinnah's mother and first wife both died during his absence in England.

Although he returned to Karachi, he remained there only a short time before moving to Bombay. Aged twenty, Jinnah began his practice in Bombay, the only Muslim barrister in the city. English had become his principal language and would remain so throughout his life. His first three years in the law, from 1897 to 1900, brought him few briefs. His first step towards a brighter career occurred when the acting Advocate General of Bombay, John Molesworth MacPherson, invited Jinnah to work from his chambers. In 1900, P. H. Dastoor, a Bombay presidency magistrate, left the post temporarily and Jinnah succeeded in getting the interim position. After his six-month appointment period, Jinnah was offered a permanent position on a 1,500 rupee per month salary. Jinnah politely declined the offer, stating that he planned to earn 1,500 rupees a day—a huge sum at that time—which he eventually did. Nevertheless, as Governor-General of Pakistan, he would refuse to accept a large salary, fixing it at 1 rupee per month.

Jinnah began political life by attending the Congress's twentieth annual meeting, in Bombay in December 1904. ( He joined before Mohandas Gandhi). He was a member of the moderate group in the Congress, favouring Hindu–Muslim unity in achieving self-government, and following such leaders as Mehta, Naoroji, and Gopal Krishna Gokhale.

In December 1912, Jinnah addressed the annual meeting of the Muslim League, although he was not yet a member. He joined the following year, although he remained a member of the Congress as well and stressed that League membership took second priority to the "greater national cause" of a free India. In April 1913, he again went to Britain, with Gokhale, to meet with officials on behalf of the Congress.

In 1916, with Jinnah now president of the Muslim League, the two organisations signed the Lucknow Pact, setting quotas for Muslim and Hindu representation in the various provinces.

Jinnah regarded Gandhi's proposed satyagraha (civil disobedience) campaign as political anarchy, and believed that self-government should be secured through constitutional means. He opposed Gandhi, but the tide of Indian opinion was against him. At the 1920 session of the Congress in Nagpur, Jinnah was shouted down by the delegates, who passed Gandhi's proposal, pledging satyagraha until India was free. Jinnah did not attend the subsequent League meeting, held in the same city, which passed a similar resolution. Because of the action of the Congress in endorsing Gandhi's campaign, Jinnah resigned from it, leaving all positions except in the Muslim League.

In 1918, Jinnah married his second wife Rattanbai Petit ("Ruttie"), 24 years his junior. She was the fashionable young daughter of his friend Sir Dinshaw Petit, of an elite Parsi family of Bombay. There was great opposition to the marriage from Rattanbai's family and the Parsi community, as well as from some Muslim religious leaders. Rattanbai defied her family and nominally converted to Islam, adopting (though never using) the name Maryam Jinnah, resulting in a permanent estrangement from her family and Parsi society. The couple resided in Bombay, and frequently travelled across India and Europe. The couple's only child, daughter Dina Jinnah, was born on 15 August 1919.[24][55] The couple separated prior to Ruttie's death in 1929, and subsequently Jinnah's sister Fatima looked after him and his child.

After Baldwin was defeated at the 1929 British parliamentary election, Ramsey MacDonald of the Labour Party became prime minister. MacDonald desired a conference of Indian and British leaders in London to discuss India's future, a course of action supported by Jinnah. Three Round Table Conferences followed over as many years, none of which resulted in a settlement. Jinnah was a delegate to the first two conferences, but was not invited to the last.[67] He remained in Britain for most of the period 1930 through 1934, practising as a barrister before the Privy Council, where he dealt with a number of Indian-related cases.

n 1931, Fatima Jinnah joined her brother in England. From then on, Muhammad Jinnah would receive personal care and support from her as he aged and began to suffer from the lung ailments which would kill him. She lived and travelled with him, and became a close advisor.

Muhammad Jinnah's daughter, Dina, was educated in England and India. Jinnah later became estranged from Dina after she decided to marry a Christian, Neville Wadia from a prominent Parsi business family. When Jinnah urged Dina to marry a Muslim, she reminded him that he had married a woman not raised in his faith. Jinnah continued to correspond cordially with his daughter, but their personal relationship was strained, and she did not come to Pakistan in his lifetime, but only for his funeral.

In early 1934, Jinnah relocated to the subcontinent, though he shuttled between London and India on business for the next few years, selling his house in Hampstead and closing his legal practice in Britain.

The Congress was much better prepared for the provincial elections in 1937, and the League failed to win a majority even of the Muslim seats in any of the provinces where members of that faith held a majority. Historians note the effect of the 1937 elections on Muslim political opinion, "when the Congress formed a government with almost all of the Muslim MLAs sitting on the Opposition benches, non-Congress Muslims were suddenly faced with this stark reality of near total political powerlessness. It was brought home to them, like a bolt of lightning, that even if the Congress did not win a single Muslim seat ... as long as it won an absolute majority in the House, on the strength of the general seats, it could and would form a government entirely on its own ..."

The Lahore Resolution (sometimes called the "Pakistan Resolution", although it does not contain that name), based on the sub-committee's work, embraced the Two-Nation Theory and called for a union of the Muslim-majority provinces in the northwest of British India, with complete autonomy. Similar rights were to be granted the Muslim-majority areas in the east, and unspecified protections given to Muslim minorities in other provinces. The resolution was passed by the League session in Lahore on 23 March 1940.He helped to found the newspaper Dawn in the early 1940s in Delhi; it helped to spread the League's message and eventually became the major English-language newspaper of Pakistan.

On 2 June, the final plan for the partition was given by the Viceroy to Indian leaders: on 15 August, the British would turn over power to two dominions. The provinces would vote on whether to continue in the existing constituent assembly, or to have a new one, that is, to join Pakistan. Bengal and Punjab would also vote, both on the question of which assembly to join, and on partition. A boundary commission would determine the final lines in the partitioned provinces. Plebiscites would take place in the North-West Frontier Province (which did not have a League government despite an overwhelmingly Muslim population), and in the majority-Muslim Sylhet district of Assam, adjacent to eastern Bengal. On 3 June, Mountbatten, Nehru, Jinnah and Sikh leader Baldev Singh made the formal announcement by radio.[Jinnah concluded his address with "Pakistan zindabad " (Long live Pakistan), which was not in the script. In the weeks which followed Punjab and Bengal cast the votes which resulted in partition. Sylhet and the N.W.F.P. voted to cast their lots with Pakistan, a decision joined by the assemblies in Sind and Baluchistan.

On 4 July 1947, Liaquat asked Mountbatten on Jinnah's behalf to recommend to the British king, George VI, that Jinnah be appointed Pakistan's first governor-general. This request angered Mountbatten, who had hoped to have that position in both dominions—he would be India's first post-independence governor-general—but Jinnah felt that Mountbatten would be likely to favour the new Hindu-majority state because of his closeness to Nehru. In addition, the governor-general would initially be a powerful figure, and Jinnah did not trust anyone else to take that office. Although the Boundary Commission, led by British lawyer Sir Cyril Radcliffe, had not yet reported, there were already massive movements of populations between the nations-to-be, as well as sectarian violence. Jinnah arranged to sell his house in Bombay and procured a new one in Karachi.On 7 August, Jinnah, with his sister and close staff, flew from Delhi to Karachi in Mountbatten's plane, and as the plane taxied, he was heard to murmur, "That's the end of that."

On 11 August, he presided over the new constituent assembly for Pakistan at Karachi, and addressed them, "You are free; you are free to go to your temples, you are free to go to your mosques or to any other place of worship in this State of Pakistan ... You may belong to any religion or caste or creed—that has nothing to do with the business of the State ... I think we should keep that in front of us as our ideal and you will find that in course of time Hindus would cease to be Hindus and Muslims would cease to be Muslims, not in the religious sense, because that is the personal faith of each individual, but in the political sense as citizens of the State."

From the 1930s, Jinnah suffered from tuberculosis; only his sister and a few others close to him were aware of his condition. Jinnah believed public knowledge of his lung ailments would hurt him politically.

In June 1948, he and Fatima flew to Quetta, in the mountains of Baluchistan, where the weather was cooler than in Karachi. He returned to Karachi for the 1 July opening ceremony for the State Bank of Pakistan, at which he spoke; a reception by the Canadian trade commissioner that evening in honour of Dominion Day was the last public event he ever attended.

We are victims of evil customs. It is a crime against humanity that our women are shut up within the four walls of the houses as prisoners. There is no sanction anywhere for the deplorable condition in which our women have to live. No struggle can ever succeed without women participating side by side with men.
— Muhammad Ali Jinnah
Retrieved from "https://khojawiki.org/w/index.php?title=Muhammad_Ali_Jinnah&oldid=109275"
Categories: