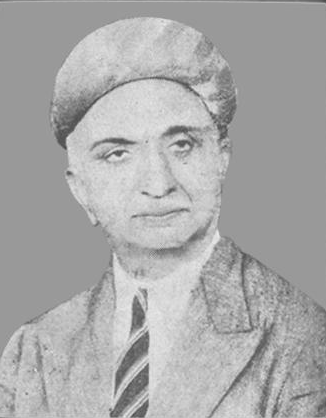 Missionary Muhammad Murad Ali Juma, known as Bapu, a term of respect for an elderly man; was born in Bombay in 1878. His mother expired when he was hardly a year old. His father did not marry a second time for the sake of his son.

He loved songs and himself was a good singer, and also played harmonium with songs. He won the hearts of multitudes with the virtue of his sweet and polite tongue. He was very cool-minded, soft by nature with a high moral character. None had ever heard him shouting or talking aloud. He was very simple in attire and food. He loved having people over for meals. He would pick up any friend or person from another town, and take him to his house for lunch or dinner.

He joined the Recreation Club Institute as a regular missionary and served the Khoja jamat for about 50 years. His attractive eloquence in preaching would move many listeners to tears. He also visited all parts of India, East Africa and Burma. During his African visit, he had a privilege to perform the first hoisting ceremony of the Ismaili Flag in Kindu Bay Jamatkhana on May 25, 1934. He rendered his valuable services to the Ismailia Association, which started the training of the volunteer waezeens in 1950. He was also the Principle of the Mission Centre in Bombay. He was invested him the title of Alijah in appreciation of his inestimable services.

He was also a trenchant writer and compiled many useful books. He also wrote many articles for different periodicals.

He was generous, unsparing, humane and charitable to the destitute and infirm. There are so many examples of his philanthropy. One day he was on a tour of waez when an old woman approached, asking him to help her in the wedding of her daughter. She needed some money, which he could not afford. He however did not frustrated her and removed the gold chain around his neck and gave her.

Missionary Alijah Muhammad Murad Ali Juma left behind a widow, Rehmatbai. He had three sons, Ramzan, Jaffer and Shamsuddin and a daughter, called Taj Bibi who married to the famous Missionary Abu Aly A. Aziz.

His wife Huzur Mukhiani Rehmatbai extended her full cooperation in the mission of Missionary Muhammad Murad Ali. She also served for several years in the Ladies Volunteer Corps in Darkhana, Bombay as a member, Secretary and the member of the Managing Committee. In appreciation of her meritorious services, she was invested the title of Huzur Mukhiani. She was an active, sincere and zealous worker, and died on Friday, October 4, 1968 at the age of 80 years.