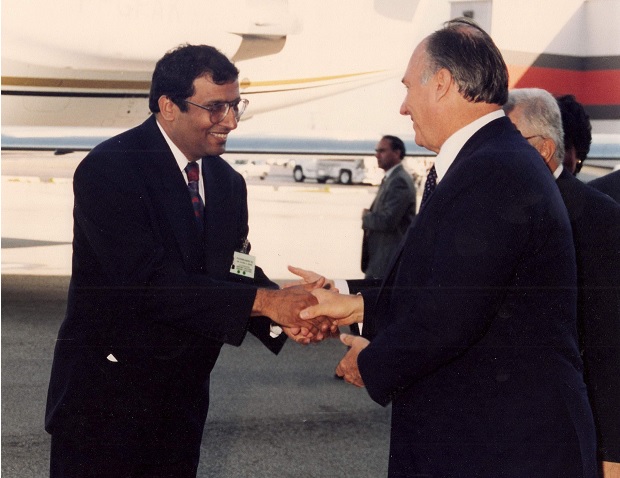 The exemplary volunteer service and dedication of Nazir Nensi to the Jamat and Mawlana Hazar Imam, and two cherished photos with the Imam

Over the past few years, Barakah and its sister websites Simerg and Simergphotos have had the privilege of publishing rare photos of Mawlana Hazar Imam and his family that have been in private collections for years. We have asked Jamati members and others to come forward and share their memories with our readers at large.

At my special request, Dr. Nazir Nensi, my dear friend and mentor for many years came up with two photos of Mawlana Hazar Imam from his personal collection. While they are of a personal nature, I felt it important to produce them here, and say something about Nazir who has served Jamati institutions in Tanzania, the UK and Canada as well as other parts of the world for nearly six decades.

I remember Nazir Nensi from the late 1960’s onwards. First as a cricketer, in Dar es Salaam, Tanzania, who opened the batting for the Young Ismailis cricket team (later named Young Cricketers). My late dad, Jehangir, also played for the team. A decent opening start always gives the later batsmen more confidence to play their game, and Nazir did this quite well by scoring double digit runs on a regular basis. He also went on to captain the Dar es Salaam University cricket team.

Then, I remember Nazir as a Math teacher. My mum, Maleksultan, taught at the Aga Khan Girls Secondary School as a religious education teacher, but many of her students would tell her about the difficulties they were having with Math. She turned to Nazir, who took special classes to assist the challenged girls. They still remember him for his excellent teaching. Today, Nazir vividly remembers how much he was moved when he was approached to teach orphaned Ismaili children at the Aga Khan Hostel in Dar es Salaam.

He also taught me. I was at the Aga Khan Mzizima Secondary School doing my ‘A’ levels when, in 1971, a large contingency of students left to go abroad after the Tanzanian government nationalized houses, and the quality of education started deteriorating. Foreign exams such as the Cambridge School Certificate were banned. Out of the more than 25 students in my class, there were only a handful left. Our math and physics teachers also left, and we had no one to teach us. It was left to Nazir and a couple of other very bright Ismailis of his age to prepare us for the Tanzanian administered exams, which were not recognized in the UK. 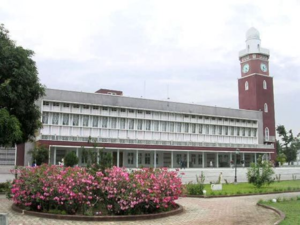 Born in Dar es Salaam in 1948, Nazir became an active volunteer at the Upanga Jamatkhana in his teenage years. He went on to hold the position of a lieutenant at the Jamatkhana. When he moved to London, England, his basement apartment at 64 Longridge Road in Earl’s Court was the stopping point for many new arrivals from Africa. I think it was one of the most well-known addresses in London, after 5 Palace Gate. I myself stayed there for a year or so in 1975-76. Nazir was ever so helpful to me whenever I sought him out for mathematical and computing problems while I was studying for my computing degree. 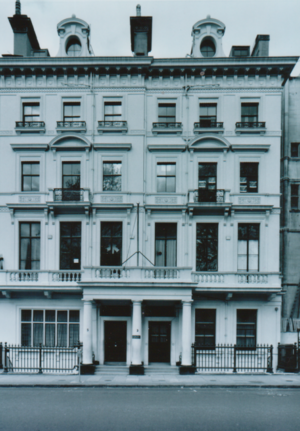 Nazir was also dedicated to his own studies. He worked very hard and diligently to complete his Ph.D at the University of London, and would later hold the position of a Senior lecturer in Computer Science at the University. Despite his secular challenges, he continued to remain active in Jamati services. He became the Major of the UK Ismaili Volunteer Corps in 1975. He was then appointed as member of the National Council for the UK. He then migrated to Canada where he has worked professionally as a technology advisor for IBM and CGI.

His commitment to the Ismaili community as a volunteer has been unflinching. Even as a newcomer to Canada, he continued to support the work of Ismaili institutions. During Mawlana Hazar Imam’s first visit to Canada in 1978 and as Member of Council for Eastern Canada during the Silver Jubileee visit (in 1983), he evaluated the challenges that Ismaili high school and university students faced with regard to their career selection and path.

Nazir reviewed with Mawlana Hazar the challenges faced by the students for which he provided guidance during the students mulaqat.

He was instrumental, with guidance from Mawlana Hazar Imam, in ensuring the Ismaili students from Iran were admitted to Faculty of Medicine in Canada to complete their final year of studies. 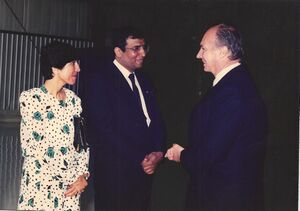 He later became the Jamati Mukhisaheb of Bayview Jamatkhana in Toronto — a position that holds deep reverence among the Ismaili Jamat around the world.

Following the Golden Jubilee of Mawlana Hazar Imam in 2008, Nazir embarked on his Time and Knowledge Nazrana (TKN) mission. His major accomplishments were completing the Engineering and Computer Science curriculum for the University of Central Asia and the Design and Construction model for the Aga Khan Academies. 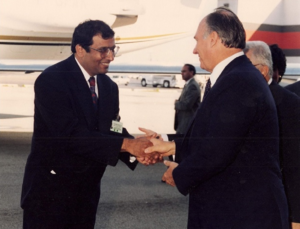 Nazir was involved with the Imara Design and Construction as a volunteer during the development and construction phases for the magnificent Delegation of Ismaili Imamat building in Ottawa (December 2008) and also the superb Aga Khan Museum and Ismaili Centre in Toronto (both opened in September 2014). At the same time he has mentored students who apply for entrance to the University of Toronto School.

Who among us who were present in Lisbon in July 2018 can ever forget the magnificent Diamond Jubilee celebrations of Mawlana Hazar Imam? Nazir was there too acting as the operations lead for the phenomenal event! Today, Nazir serves as Regional Chair of Aga Khan Foundation Donor Services for Ontario.

The TKN experience and other volunteer engagements for the past 6 decades have resulted in a strong track record of volunteerism for Nazir. Throughout his endeavours he has been remarkably supported by his wife Farida. He has 3 children, Karim Nensi, Ali Nensi and Zahra Nensi

For all his services he has been bestowed with the title of Rai.

In addition to professional growth and his commitment as a volunteer in the Ismaili community, he has maintained his presence in Jamatkhana on a regular basis. This is where Nazir says he has experienced personal and spiritual fulfillment as well as enlightenment.

For Nazir, all the opportunities that have come his way are “a blessing.” He often feels that he takes away more than he can give to his beloved Imam and the Jamat.

His service record from his teenage years until today has been truly remarkable. He has always remained humble, and we pray for Nazir and his family’s continued service to Mawlana Hazar Imam and the Jamat.