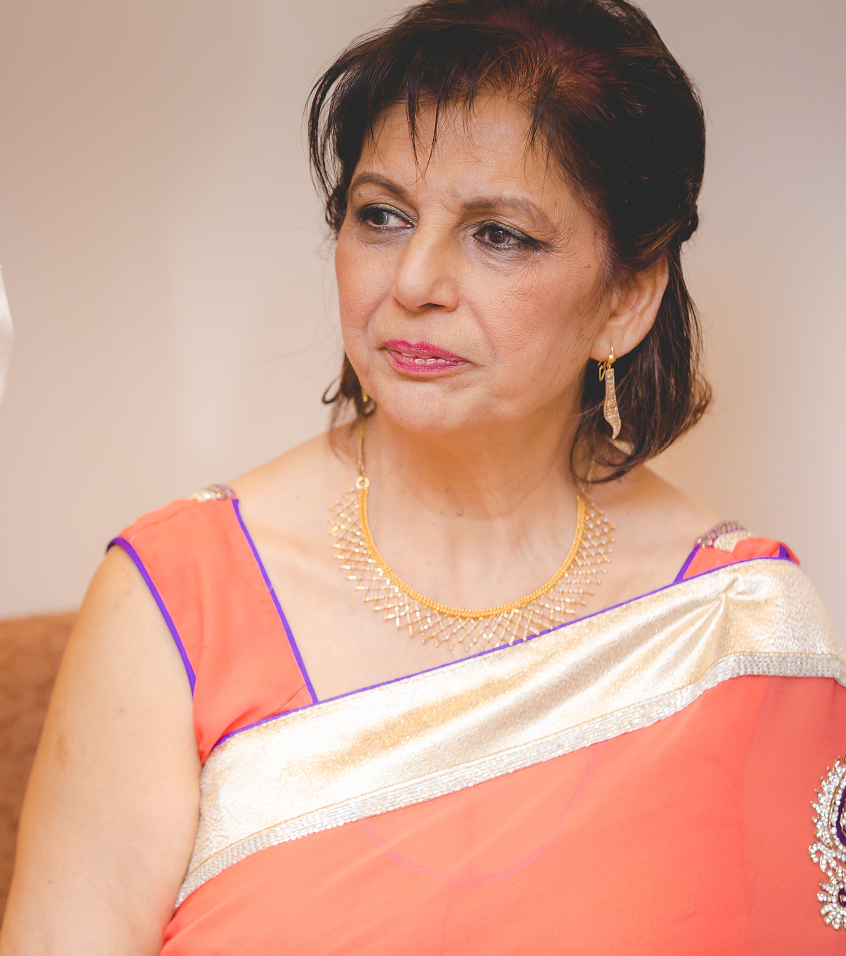 Noor Nagji of Toronto Canada feels blessed notwithstanding that she is probably the only woman in the world who during her remarkable life journey, has had to qualify as a medical doctor not once nor twice but four times on three continents.

But for Dr. Noor (as she is affectionately known to her patients) the most important accomplishment of her life is that she has fulfilled the commitments she made at her father’s Bombay funeral in 1958.

She was fortunate to be born to a relatively wealthy oil-mill owner and went to an English medium primary school. Her childhood memories are of a fun-filled home with plenty of brothers and sisters and of being daddy’s “spoiled” child.

All that changed in 1958 when after lunch, her father suddenly complained of chest pains. Noor was quickly sent to fetch the neighborhood doctor but because it was a Diwali holiday he refused to come. When Noor pleaded with him, he angrily pushed her on to a cemented floor and she left bruised and crying. By the time she got back home, her father had passed away from a heart attack. And soon thereafter, because the family lost their business to their partners, Noor was thrown into a cycle of poverty as her family had to join her father's parents and brothers in Sylhet in what is now Bangladesh.

At her father’s funeral in between the tears, the feisty little Noor had made some personal vows. Inspired by Indian tradition, she tied “3 knots” on a piece of the kafan cloth (shroud):

And those commitments, made to her father have set the pattern of her life – a life of unwavering determination that has resulted in an inspiring personal story,

Noor’s mother was illiterate and in that time in Bangladesh, the family did not believe nor had resources to educate anyone in the family, and even more so because she was a female child! But Noor was determined. She was keen to work hard and to keep true to her vow. She began by writing an essay in the newly learned Bengali language that won a competition against native Bengalis. She then went on to win several long-term scholarships that sponsored her entire medical education!

But just before her graduation in 1971, a brutal civil war in Bangladesh left her and fellow non-Bengali medical students in mortal danger. Fortunately, a friendly army Captain took them to his house, after which she hid from the bombs in the local Mukhisaheb’s house and finally, was helped by the Captain to escape to Pakistan.

In Karachi, after much trial and tribulation, Noor secured admission to the prestigious Dow Medical College (these were the days prior to the Aga Khan University) and went on to win gold medals in each of the three years of study, which was a school record. Ironically, when she graduated in 1975, she could not attend the ceremony as she was too poor to afford the gown.

However, Noor was soon able to serve as a doctor at two hospitals, the Seventh Day Adventist and the Ziauddin Hospital. On January 1st, 1976, she was married in a small ceremony and then immediately left for East Africa with her husband. Her honeymoon which she still remembers was visiting the famous Tanzanian game parks and seeing wildlife for the first time.

Once again, Noor had to hit the books as neither of her qualifications to practice from Pakistan nor Tanzania was recognized. Her internship and residency were at the Muhimbili Hospital and as she did not speak Swahili, she recalls getting into trouble with the library staff for calling a woman ndugu brother.

Dr. Noor began to resettle by first working at the Aga Khan Hospital, where she delivered her daughter, Ashnoor on Diwali day (the same day her father died years earlier). To add more drama to her life, the delivery happened on a Sunday when driving was banned. Luckily, Noor got an urgent ride from Dar’s famous ghazal singer Mehdi Bawa, who ran a driving school that was exempted from the ban.

Later, she used her inherited business sense to buy the medical practice of a local doctor and enlisted the help of his compounder to translate for her patients. In time, Noor realized that in Tanzania the prospects for her family were limited (her daughter was growing up speaking only Swahili) and she desired to join the community in Canada.

In the late 1970s, the family moved to Edmonton where her Pakistani, Bangladeshi and Tanzanian medical qualifications were once again, not recognized. Since money was tight, she took a job as a medical secretary but felt mistreated. Some friends persuaded her to try to get herself requalified, which was now a harder decision. Her daughter had just begun adjusting to Canada; she remembers her daughter asking for water in kindergarten speaking Swahili “nataka maji” and since no one understood her, she went thirsty.

But soon enough, her vows took over and she changed her job to the night shift at a hotel, so she could study for her medical exams. She passed those, but like many new immigrants, she was denied internship at a hospital. So instead, Noor got a job as an assistant to an internist doctor at the Royal Alexander Hospital in Edmonton. By a sweet twist of fate, her own son graduated from the same hospital 30 years later.

Eventually, she joined the anesthesiology residency program at the University of Alberta and began her practice. Soon, she was looking for another opportunity better suited to Toronto. She met Dr. Diamond Allidina/Dr. Nizar Mussani an Emergency Room physician who in addition to Dr. Stewart helped to mentor her. Dr. Noor was than able to secure a two-year internship at St Joseph’s and Sick Kids Hospital. As per her contract, akin to return of service, she was required to serve in rural Newfoundland. Later, one of her doctor friends left for India and Dr. Noor took over her family medical practice in Deer Lake, Newfoundland.

While pregnant, she moved from rural Newfoundland to Northern Ontario. Noor fondly remembers going out ‘into the bush’ to spot for moose and driving over frozen lakes which could collapse at any time. Soon, she was pregnant again and on one such drive, someone stopped suddenly to look at the sunset on the highway, which caused an accident. Thankfully, her baby was safe.

Soon after her move to Timmins, she had to accompany three seriously wounded car/moose accident victims on a helicopter ride to Sudbury. One of the victims was her daughter’s school friend. In Sudbury, the receiving doctor was Dr. Alnoor Abdulla, Cardiologist, who scolded her for risking injury to her pregnancy. She told him that she was the only doctor in Timmins and was not going to repeat what happened at her dad’s time in Mumbai.

As it turned out, Dr. Abdulla, a well-known Canadian cardiologist later helped to bring her brother from Pakistan to Sudbury for treatment of a 99% blocked artery – covering the cost and caring for him in his own home (with his wife, Almas Moosa).

Whilst in Timmins, Dr. Noor worked extremely hard in clinic, hospital and even house calls (which she still does). She remembers one day she went to see a 90-year-old woman. When she got there, the family rudely told Noor to go into the basement to see the old lady, as they were busy eating dinner. Noor felt humiliated but remembered her “knot” commitment to her father to be a good doctor.

Her son, Alim was also born on Diwali day and she warmly recalls how he was taken care of by a mother/daughter pair in Timmins (Dixie and Lorraine). They would buy toys for him and also took him to baby shows where once he won the prize as the cutest child. She also got to visit her home country Pakistan, as a donor for the Aga Khan University in Karachi. Eventually, she decided that her children were in need of her community and she gave up a comfortable life in Timmins to start over again this time in Toronto.

She began working for several doctors in Toronto but that was not good enough for this amazing woman. So she built up her own practice in Thorncliffe Park, a mainly ethnic area where she cared for multiple generations. Later she leveraged her fluency in Bengali, Urdu and five other languages to start her own clinic on the Danforth. She ran both clinics for over 15 years.

During her life, there were many opportunities to demonstrate her commitment to her third “knot”.

On a visit to Pakistan, she was asked by a poor woman to take her daughter Rehana to Canada. So she brought her as a nanny to look after her son, Alim and his two grandmas, who both lived with Noor for many years. Rehana was taught to cook well by one of them and then would cook for 70 people for Noor’s frequent “satsangs” religious gatherings. With Noor’s encouragement, Rehana did computer classes in the evening. After becoming educated, Rehana married and with her husband, Rehana was then able to sponsor 19 members of her family to a better life in Canada.

Noor also remains true to the 3rd “knot” by being heavily involved since 1989, with the Toronto MAS (Medical Advisory Service) Program and has delivered hundreds of lectures in English, Gujarati and Urdu on various public medical subjects in order to educate the local community on risk prevention and their rights to access the best health services.

Noor likes to share her good fortune with her family. She has supported her brother in Pakistan, buying them a home and educating his three children – one received a double Master’s in the UK via the STEP program and the twins followed her footsteps becoming physicians. Both trained at the same Dow Medical College. From being the only sibling to receive a formal education to inspiring others in her family to prioritize education, Dr. Noor’s determination to pursue medicine paved the path for others to do the same.

In 2001, Noor separated from her husband and started a new practice from scratch. Later, she was fortunate to meet Salim Moosa a chartered accountant and a tabla nawaz who plays a solid game of table tennis. Dr. Noor has traveled to over 35 countries. Her daughter, Dr. Ashnoor Nagji is a family physician who works with marginalized populations and delivers babies. She has traveled to 99 countries and was the founder of BELIEF (Becoming Educated Leaders Inspired by Exemplary Females), a platform for women’s empowerment. Her son, Dr. Alim Nagji is an emergency physician and is married to Dr. Rabia Bana, who is currently in a public health resident.

Recently, Dr. Noor went through a near-death experience but she has now recovered. We are pleased to report that she is back to her volunteer work with The Agakhan Museum and the World Partnership Walk in Toronto.

All of us here at Khojawiki wish her the best health as it seems there are many chapters still to write in her remarkable life journey.