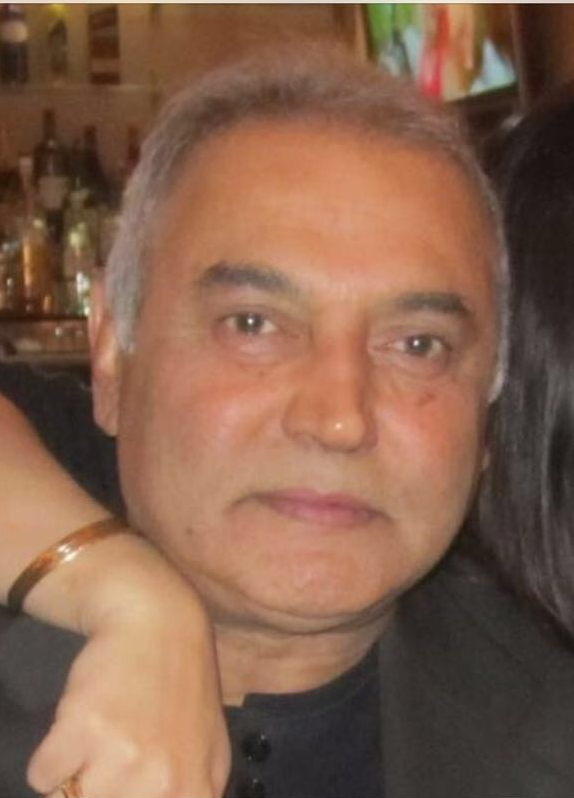 Looking back on his eventful life, Salim Bhanji never could have guessed that skipping high school classes and hanging out at his father’s auto garage in Tanga, Tanzania would, some day make him eligible for the very desirable Canadian Immigration visa and then lead to a successful business-owner life in Toronto!

Or that the dawa medicine of laughter he has provided, as a master stand-up comedian within the Khoja community in Toronto during the last 15 years, would one day be needed by him as he heals himself from the pain of the ultimate tragedy of any life-the loss of his young son!

Growing up, Salim was always the independent type-he did not like school (Usagara Secondary School) and stopped going as soon as he was old enough. When his father sent him to a “better school”, the Agakhan Academy in Mombasa, he stayed for one day and got himself back home, the very next!

But all his youth, Salim had been around his father’s auto-body shop, watching radios and other electricals repairs, eventually learning to fix things himself. He even owned a small book with a big name “The A to Z of Electricals”!

So he was sent to apprentice at Cooper Motors Corporation, a well-known dealership and sure enough, within 6 months, Salim was the local expert on VW Beetle car engines! Life settled in very well for him and Salim also became popular as a Bollywood singer. In fact, his father played the harmonium and the taisokota and both his sisters also sang. So family life in the friendly town of Tanga was quite good for Salim.

So how did Salim end up in Canada, you may ask.

By 1974, many Khojas were immigrating to Canada and Salim’s uncle had brought some application forms for the family. But Salim had no interest in giving up his fun lifestyle! One day, he was out drag-racing (a Renault v/s a Mini Minor, he remembers!) and got into a fist fight. Cops came and his father had to bail him out-but not without giving him an earful about his “loafer-wera”, for the whole of the next day. So Salim sulked out of the house, went for a long walk on the railway track and soon enough, he had the answer to his anger-he would run away to Canada! He sent his immigration application and just then, Canada was short of auto mechanics and lo and behold, Salim was invited for an interview in Nairobi and received a crisp visa for Canada!

"July 1st 1975, the big Canada Day Holiday weekend and my uncle comes to pick me at the Toronto Airport up by public transit! So we had to travel to Islington Station by bus and then by a underground subway full of holiday crowds, then walk 3 blocks to my uncle’s Dovercourt Road apartment -me in a hot wool suit and “fancy” tie, lugging the full 66 kilos that I had been permitted by the airline, carrying African carvings that I was told could be sold for a good profit in Canada!"

In Toronto, there were plenty of jobs for auto mechanics - but the first place he interviewed, he was asked if he brought his “tools”- sorry, no tools, no job! He told his friends and they promptly drove him to local Canadian Tire tools superstore where he spent all the money he had – And Salim had had his first job at a handsome $5 per hour! He got fired after 5 months because he refused to continue the scam of selling new brake pads when cheaper repairs could be done! The next job was more money but it was in a cold drafty garage and since it was his first winter, he was often sick and so was fired again!

By now, Salim figured that jobs were not going to be a problem - he returned to Tanzania, married and then back in Toronto, he rented an small apartment at 390 Dawes Road, a building which was then, and is now, full of Khojas.Since he only had a single bed, one day, when he spied a good double bed on curbside (for disposal!), he and his wife went for it but every time they got it to the elevator, a bunch of familiar faces would come out and so they would pretend that they were throwing the bed out! Finally, the best way was to lug it up the side stairs to the second floor and then take it their apartment!

By now, Salim had a good boss (but he had to feed the owner’s fierce German Sheppard guard-dog on weekends!) and a $7:50 an hour pay-then life got even better- he won $10,000 on a lottery! Most immigrants would have made a down payment on a small home – Salim, instead, paid out his old travel debt to his father, gave some money to his siblings and then spent rest of it on a grand visit to Tanzania (where everyone thought he had won $100,000!). Because he overstayed in Tanzania, Salim lost his job again and naturally, the money was soon finished!

Another job and a fellow worker's suggestion got him into his own small garage business - later, his nearest rivals, a pair of Germans, were retiring and sold him their property and garage for less than what they were offered from others-because Salim was known for his good skills on German cars and his professional honesty! Salim Bhanji has never looked back, being his own boss for 40 years, gaining a reputation for honest car deals and repairs in Toronto.

COMEDY He became a stand up comedy quite casually-around 1994, during local volleyball tournaments amongst the South Asian clubs, in the parking lots, friends would gather around him as he told his jokes . One time, the tournament hall almost emptied out to listen to him and so in the future, the organisers would invite him to tell a few jokes before each game!!

One day, a visitor invited him to tell jokes at a party in Vancouver-when he arrived, there were posters all over town advertising the “party”, at a cost of $20 and “Salim Bhanji, Toronto Comedian" as it's main item- Salim panicked but was eventually persuaded to take the stage in front of a large crowd . He started by saying (in broken Hindustani, Kutch, Gujarati, all mixed) “there are only two famous Salims, one is the dead Mughal emperor and the other – you are looking at him”. People started to laugh and Salim became a stand-up comedian, a regular opening event at Toronto Khoja gatherings! You can watch some of his comedy on Utube by searcing Salim Bhanji.

Salim has never charged for his performances ever!

And his best ever reward ever,he says, was when a man requested Salim to come to his home to cheer his wife, who was in clinical depression. When Salim started, she was hunched over, totally disinterested but soon enough, with his jokes, he had her smiling and then laughing. The next day, the husband begged Salim to come again as he was really making a difference. And sure enough, more jokes and more laughter got her completely out of her condition! Salim has been having this effect on his audience in Toronto for decades!

By now, Salim had 2 sons and both were automotive mechanics. His son Faisal was also champion volleyball player (traditional style). In fact, he was so good that he was barred from the local South Asian tournaments, because when he played, his side always won!

Last year, Faisal joined his father in the business and when Salim took a holiday, Faisal doubled the sales of cars, by advertising in social media like Kijiji etc. So Salim bought himself a Eurovan and made it into a camper with plans to work less and spend more time travelling across beautiful Canada.

Unfortunately, last August, his son complained of stomach ache-he was quickly diagnosed with pancreatic cancer and died within a mere two months-He was only 29 years of age.

Salim has learned to hide his grief, immersing himself into his garage work. By nature, he is used to seeing the funny side of life and through his comedy, he has made people laugh, even as they are going through their rough patches. At this time, Salim knows that laughter is the best medicine for himself, his wife and his other son.

In Canada, Khojas have enjoyed his humorous mixture of Swahili, Kutchi, Gujarati, Hindustani and English- it is everyone's hope that Salim will face this challenge, as he has faced others throughout his life - with strength and humour.