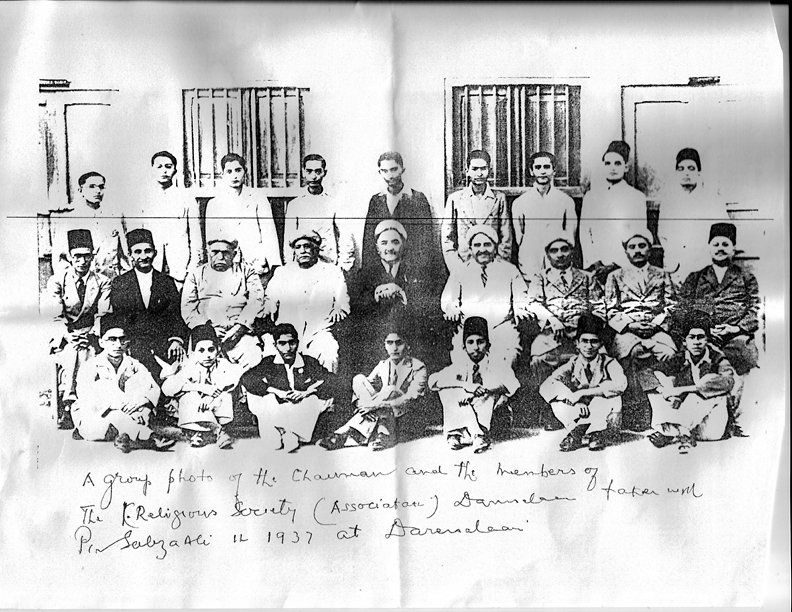 Pir Subzali Ramzan (seated) at a Khoja Ismaili Wedding in Moshi, Sunday, November 11th, 1934. The groom on the right (with garland)is Lutufali Datoo. 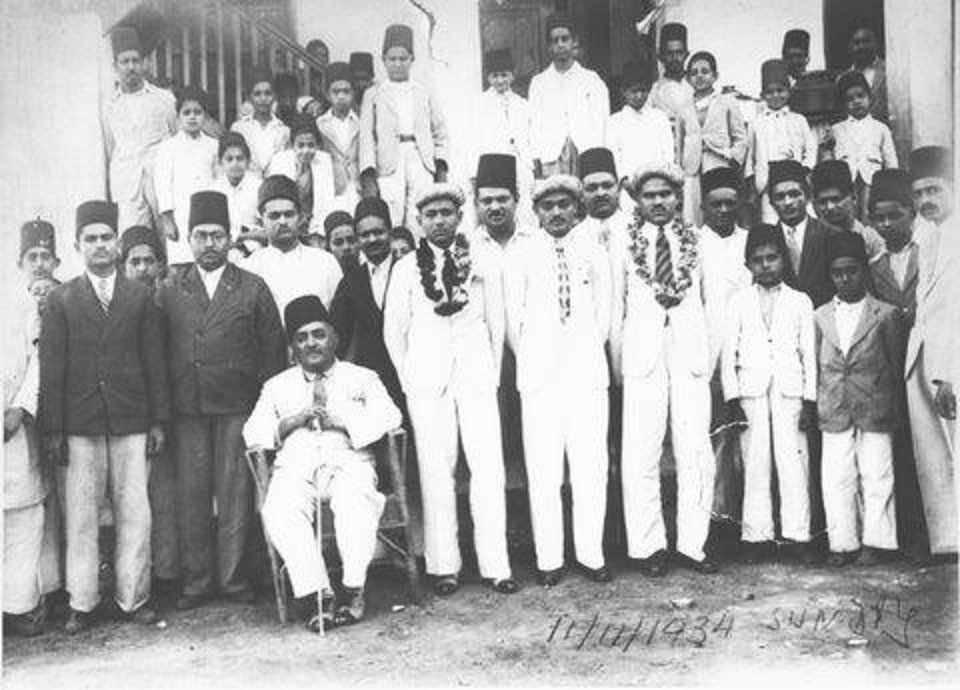 From a legal document of Bombay Court (1915), it is confirmed that Subzali Ramzanali, the son of a Kutchi trader in Bombay, was born in 1884 and was two years old when his father died in Bombay. His mother, Maghbai (1850-1945) brought up her children by herself.

It appears that Sabzali took no interest in his formal education. He would often play truant in company with others of same frame of mind. This slipshod schooling continued for about a couple of years mainly under the pressure of his elder brother. When MahomedJaffer was convinced that his younger brother was not education-oriented, he was sent to Gwadar in 1898 when he was 14 years old. By this time he had scarcely finished char-chopri four books of Gujrati and only two of English.

He learnt the mechanism of fish business from Muhammad Remu. He conducted the business of Varas Muhammad Remu as his agent in Pisani and In 1912, Muhammad Remu promoted him as his agent in Ormada He became an expert merchant, a missionary and a devoted social worker. He is noted for organizing functions, inviting the parents and distributed sweets and prizes to the students. He spent about 20 years in Gwadar, Pasani and Ormada as an ordinary worker and then became his agent, earning a good salary.

He then stared his own fish business in Karachi in 1919 and also became an exporter of cotton yarn of Sind to Bombay.

In Karachi, he was also the director of the newly formed the Khoja Ismaili Trading Co. in 1918. He was generous and provided furniture and fixture to the Ismaili institutions.

Pir Sabzali also gave a donation of Rs. 1000/- and a plot of Ormada of equal cost. He also collected a fund of Rs. 1000/- from different individuals for a school.

In 1929, Sind experienced a flood due to heavy rain of 30 inches. The Ismailis became homeless and their cattle were swept into the water. At once, he wrote abroad, appealing the donors to share in the noble cause. He collected massive funds for the welfare of Ismailis.

For his missionary work, he was granted the title of "Pir" by the Ismaili Imam. This was a great honour as he was the last of the great Ismaili Pirs of the Indian Subcontinent.

Pir Subzali passed away on December 12, 1938, at 8.25 a.m. His sudden demise occasioned deep grief among all classes and communities. The fifty-five years of his life was packed with accomplishments,

The marriage of Fatima was solemnized with Hussain Ghulam (1918-1981) in Karachi.