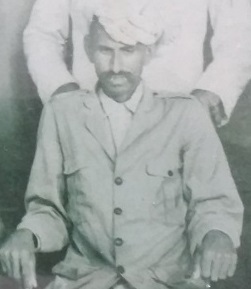 Walji Bhai was born in Khoja Beraja, one of 7 children in a subsistence farmer family. He went to the village school for 2 chopri class in gujarati and then joined his father and brothers in the family keth farm. They grew food crops like millet, jowar and rice as well as other necessities. In order to buy oil, clothes, and sweets, they made chena dung fuel pellets, which they sold in Jamnagar town, about 22 kms away. There was Jamat khana was in the village and so there was little travel outside.

Life was hard as the farm depended on irrigation through a well, which died up when there were no rain. They lived in a mud and stone house that they built themselves. There were no toilets and everyone went to the river or in the woods!

When he married, his father built him a similar house as was for the other 6 brothers. 5 of those 7 houses are still standing to this date. Walji Bhai had 5 children.

In 1949, when he was 50 years old and his father had passed away, Walji Bhai decided to join his children in Tanzania. He gave the best lands to his siblings and their family and also gave away the rest to a Patel farmer for free, but not before he had paid a whole years taxes- apparently, no one wanted that hard-scrable land although today, it is worth over one million dollars!

His eldest son had a business in Mingoni, near Mtwara and so, Walji Bhai and his wife, two daughters and two sons went to join them. Later, he came to live in Dar es Salaam with his other son, Hassanali.

In 1974, due to the political situation in Tanzania, he decided to immigrate to Karachi but returned shortly thereafter disappointed. He eventually went back and died there in 1984.