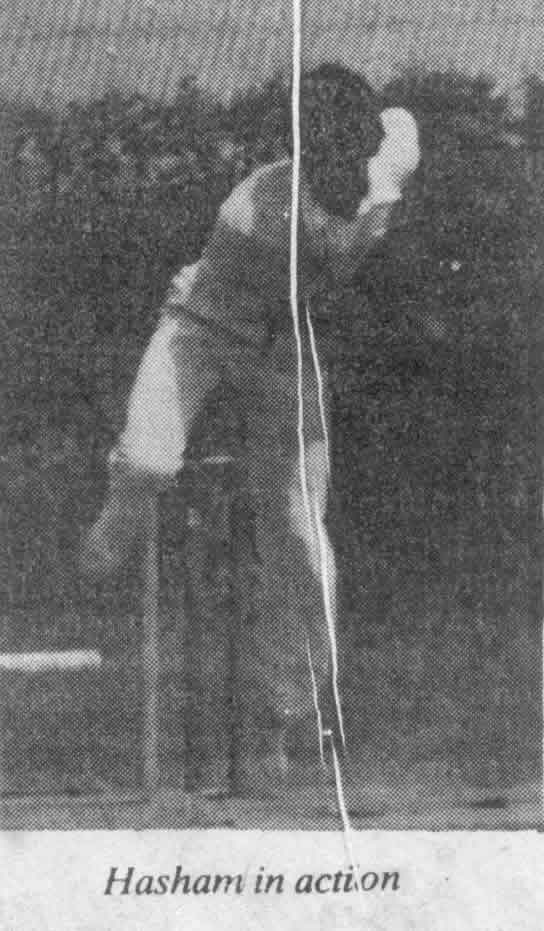 The transformation of Alnasir Hasham from nobody who had the least liking for cricket to somebody on the cricket field who gets loved, swooned over and passionately endeared by fans is a wonder.

It was football that had been Alnasir’s childhood obsession and still remains his favourite game. He used to play for ‘Simba B’ and now represents ‘Morning Stars’. He derives his nickname from football as his colleagues on the football field refer to him as ‘Ilala’ for his hectic movements.

Born on 15th March,1957 in Daressalaam, Alnasir is a tall and well built athlete who never played cricket in childhood or at school level. He is friendly and rarely gets provoked by criticism. Interestingly his liking for Pakistan’s speedster and the name itself makes him name his son ‘Imran’.

Alnasir starts his daily routine with a game of football at 6.30 in the morning followed by running at least 12 rounds of the football track. He then devotes almost an hour to physical exercise. Evenings find him practicing cricket at Diamond Jubilee. No doubt he was adjudged the fittest amongst the lot assembled at Ndola in Zambia during the last Quadrangular tournament.

Incidentally during the last Quadrangular in Daressalaam Alnasir was entrusted with the task of selling tickets. On that occasion his father on seeing the participants being hailed by fans had remarked to him that cricket was the game that would bring reward and fame to him.

In sheer gush, Alnasir challenged that soon he would be amongst the players. The striking point is his confidence that also prompts him while fielding on the boundary line to gesticulate at the batsmen to lift the ball towards him.

Alnasir engaged himself with consistent cricket practice and Shiraz Sumar sensing potential in him grabbed him. Alnasir expresses his gratitude to Amin Kara for boosting his career. Kara was such a morale support that he promoted Alnasir at the expense of demoting himself. Alnasir thus all of a sudden found himself in the ‘A’side of Dar Cricketers in 1981 along with his brother Zul Hasham. Alnasir also gives lot of credit to Pinto for encouraging him and Nizar Jiwani for furthering his career. However it was Sumar who injected confidence in Alnasir and his present status is mainly due to Sumar.

In 1981 the Tanzanian Selection Committee noticed Alnasir and picked him to join the National Side for the Quadrangular in Zambia where he was also selected to play for the East African Side.

Since his emergence on the cricket scene Alnasir has been famous for his speedy bowling that has also won him the best bowler award at Malawi during the 1982 Quadrangular, but this season has indeed witnessed encouraging signs in the way he added consistency and control to his batting ability. His fielding has produced spectacular running catches stunning the batsmen and bewildering spectators.

Among the new crop of cricketers none has shown the skill and brilliance of Alnasir who within a couple of years has created an everlasting impact upon the minds of viewers.

Muscled thighs, impressive shoulders, lithe on whispering feet with a quick right arm action Alnasir thunders up to the wicket gathering momentum with every stride. It is the long run that makes him feel good. His delivery lacks swing but can beat the batsman with sheer pace.

Bowling with the wind against Dar Brotherhood he clean bowled the three Patels-Ashok, Gopal and Bhaskar in a short spell of six overs conceding only nine runs. In the instance of Gopal the middle stump broke into two pieces.

Similarly against Union in the 1982 Saturday game he claimed three vital wickets. He had Kabana lbw, Amir caught in the slips and Shakir clean bowled.

Alnasir proves effective even in his second spell. In a Saturday game at a decisive stage when Union’s Bashir Tejani was well set Alnasir was recalled and he bowled the veteran swinging the game in Dar Cricketers favour.

What is heartening is his recent superb form with the bat. This league season he has scored 563 runs. From a tailender who would strike the ball here and there scoring odd runs Alnasir has built up himself into a sensible batsman.

Alnasir scores his runs by crease occupation rather than a dazzling array of strokes but does it with an air of authority that is impressive. He may lack in technicality but gradually with the passing of time and more cricket he ought to develop into a real fine batsman.

Alnasir’s biggest plus point is his fielding. He gets marked out on the ground for his agility in picking the ball and throwing it back accurately. At Kinondoni ground last year Upanga’s Chandrakant Ravji hit an almost six when Alnasir jumpingly grabbed the ball within the boundary line. At Gymkhana ground this season Alnasir ran all the way from mid on to square leg to hold a spectacular catch that led to the dismissal of Upanga’s Bhadressa.

The emergence of Alnasir or Ilala as he is popularly known is regarded as a great scoop for Dar Cricketers. Being moulded by Shiraz Sumar and strengthened by the entrance of Alnasir Dar Cricketers generate infectious team spirit. It stands up as one cohesive unit that now succeeds in prevailing over strong opponents, a fractional glance of the good old past when the side was almost unbeatable.