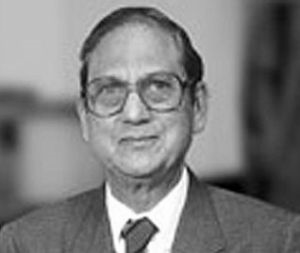 The son of Sir Sultan and Lady Sherbanoo, Mr. Amir S. Chinoy was born in Bombay on 21st September 1921. He migrated to Pakistan in 1948, shortly after his marriage to Almas, daughter of Colonel and Mrs. Munawar Khan Afridi, on 9th February 1947.

As an active educationist, he played a leading role in establishing the Institute of Business Administration Karachi and was a Trustee of the Aga Khan University Hospital Foundation, the Aga Khan Central Education Board, in addition to being the Founding President of the Management Association of Pakistan (MAP). Appointed the Honorary Consul General of Greece in 1968, he dealt with this prestigious appointment with great honor and dignity.As a result of his efforts and commitment, he was awarded the ‘ORDER OF THE PHOENIX OF GREECE’ in 1989, one of the highest honors bestowed upon honorary persons.

In his lifetime, he was the unifying force of the scattered Chinoy family. His book “The Chinoys", a biographical sketch of the family was a major accomplishment, signifying his position as the life and soul of the family, as well as making the family aware of its heritage.

He passed away peacefully on 23rd Ramazan 1418 A.H. (22nd January 1998) after a brief illness, leaving behind his beloved wife Almas, sons Mustapha and Kamal, daughters Farhana and Saadia and 13 grand children.

via biography of the founder: Pakistan Cables