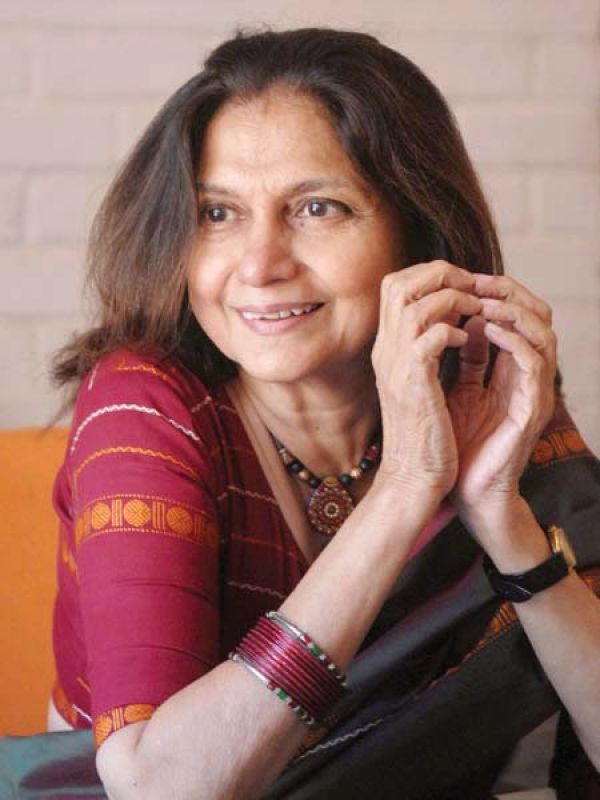 Writer and columnist Bhaichand Patel once said, "I knew Yasmeen Chinoy in Bombay before she married Azim Premji. Her family lived in a sprawling flat above a garage in Chowpatty. She was the prettiest girl in town, very bright, with an enchanting smile. We were all in love with her."

That enchanting smile is still very much in evidence throughout the interview. In person Yasmeen is polite and reserved and yet one instinctively senses that she is fiercely independent and in possesion of a steely determination. It comes as no surprise when Yasmeen recalls that in her early 20's she back-packed across Europe for 15 months, all by herself.

In 1970 such a thing was unheard of. Naturally her grandmother, Shireen, was horrified. "You are letting her go to Europe on her own?" she asked her daughter, Shah Chinoy. And Shah replied: "I am not letting Yasmeen go. She is going," Yasmeen recalls, her eyes sparkling with amusement. "I did it because I wanted to. It was exciting," she says.

Soon after her return to India Yasmeen wed Azim Premji. The wedding was a simple affair as prevailing government rules allowed a couple to invite only 100 guests. They forgot to call a photographer for the reception and gave their wedding gifts away to charity. Similarly decades later, the wedding of their elder son Rishad had none of the pomp and ceremony (and wastefulness) associated with India's rich; high profile guests were served food in paper plates.

Earlier, she topped her BA course in Mumbai's St Xaviers College and got the highest marks in psychology for Bombay University while simultaneously completing a course in interior design, simply because the subject interested her. In addition to this she represented her college and state in hockey, after being appointed games captain at her school, Queen Mary's, where she played basketball, athletics, table-tennis and chess. "My passion was hockey, though I don't follow it much now. But I loved Chak De India," she grins.

Her father's family owned what was then the largest garage in Asia and Yasmeen says she enjoyed a carefree, "privileged" childhood. "In my early days at college I used to worry about my mother. I would go to parties and my friends would complain about their mothers. But I had no rules and no fights, because my mother was my friend."

She began writing when she was about 10. Her first short story was published in the Sunday Standard supplement of The Indian Express under a pseudonym, Wye, just before she turned 18. "It was a story about two boys who later drown. And yes, that element of tragedy exists in almost everything I write," she feels. Her mother encouraged her interest in writing by reading aloud stories to her in English.

"Once she quoted Alexander Dumas and told me: If you want to write, you must read and read and listen well. Then it will all come out. (For all these years) I was waiting for a book to come out of me and now that it is out, I feel quite content, as if a part of the course that had to be run, has been run," she reflects.

But her novel was 20 years in the making as Yasmeen went about collecting stories, reading biographies and talking to all kinds of people to get the details right. Such painstaking research paid off-the book is a treasure trove of trivia on geography, history, culture, food habits, clothes, transportation, agriculture and economy of Kutch, the 1800s Bombay, Zanzibar, bits of Kolkata and East Africa, among others.

"My book is not a biography of my father-in-law as is being presumed by many. But yes I have linked together old stories passed on by relatives on both sides," Yasmeen says.

"Some characters and incidents are purely imaginary, like the insubstantial and mysterious Khokon, who came to me suddenly when I was on a holiday in Burma. I was crossing the Irawady river in a boat and the boatman was describing the lungi the locals wore. It was then that the character of Khokon was born," she adds.

Yasmeen laughs when she recalls how Azim and her two sons, Rishad (chief strategy officer at Wipro) and Tariq (who works with the AP Foundation) responded to news of her book.

Besides literature, Yasmeen's other passion is architecture. A 15-year stint as a part-time editor at architecture and design magazine Inside Outside, (which she quit when the family moved to Bangalore in the late 1990s), honed her writing skills and left her with a love for architecture, which led to her designing a family house in Mumbai and the AP Foundation.

A fiercely private individual, Yasmeen is reticent when it comes to talking about certain subjects like family or money. "We've had our share of ups and downs like everybody else, but I like his sense of humour, his openness to life," is all she will say about her 38-year-long marriage to Azim Premji. But she admits that they are both deeply committed to the field of philanthrophy.

"There is so much that needs to be done for others." When asked whether her sons will suceed their father and inherit Wipro, she says. "We first need to know what they will inherit and how much will go to charity. Management of a business cannot be inherited, though shares can be. Let's see how it goes."

The very fit Yasmeen is also a great believer in the power of yoga. "My mother was a yoga fanatic and I was bulldozed into it since I was a little girl. I still do a combination of yoga and physical exercises," she says. Apropos to nothing she adds she would have liked to have had a daughter, but had decided long ago to only have only two children.

"I don't believe in regrets, I am quite happy. I wish I had somebody to chat with more, as I had a very close relationship with mother and mother-in-law. It is a bit late now, maybe in my next lifetime I will be more organised and get everything right," she says and then flashes that enchanting smile once more.