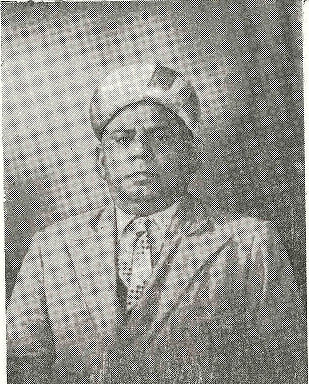 In Dar es Salaam, many Khoja Ismaili families lived in the modern flats of Diamondabad, Karimabad, UmmeHabibabad, Aminabad, Sadrabad etc. A total of 125 families lived in those flats but few people know that that Juma Lalji and his company had built them. And that other prominent buildings such as Bharat Bhavan, Regal House, Printers House, Metro house etc were also constructed by them. Or that almost 40,000,000 shillings were invested for their construction during the 50’s. It was these buildings that made Dar es Salaam into a modern capital!

When he first came to Africa, Juma Lalji had zero capital but he became a very successful building contractor and a respected jamaat elder. His retail shops were on the main bazaar streets like Ring Street and Acacia Avenue.

What was his secret?

Some people said he was successful because of a miracle, others said because of his kismet destiny and many pointed to his hard work. But Juma Lalji himself, however, always believed that he progressed because of his sewa civic service.

If we do good for others than someone will do good for us. Whatever you do, you will get it back.
— Juma Lalji

In 1914, when he was 24 years old, Juma Laljee began his business life in Jangbar. He had no wealth so he started a very small cloves and coconuts brokerage in the Guliani market. A. G. Abdulhusein used to come there for purchasing and he remembered him from those times. To be successful, Juma Lalji focused on shamba farm contracts for his purchasing. That was hard work but he made more profit and also learnt a lot from it.

In 1928, he decided to come to the growing metropolis of Dar es Salaam and started a clothing store in the African suburb of Kariakoo. Once again, this was a bold move, as most Khoja traders were located in the Gham area in the Indian Bazaar.

Juma Lalji believed that his real progress in life started from 1937, when began his sewa as a community volunteer. In that year also, the British colonial government started a special constable unit and Juma Lalji became a lieutenant.

In 1937 as well, he got an opportunity to rent and operate a couple small salt mines and after 2 years, he bought the mines. By 1957, his mines had increased production from 500 sacks to 6000 sacks. He faced many obstacles in running the mines. Sometimes, he was so broke, he had no money to pay for the labor and often survived upto 15 days only on fish and mogo cassava, drinking black tea to save 10 cents of milk!

In 1946, the 3rd Agakhan celebrated his Diamond Jubilee in Dar es Salaam and Juma Lalji was appointed by the British colonial government as the first Assistant to the Commander of the camp built for the upcountry guests. There were 6 another assistants and almost 250 Africans askaris soldiers under him. Juma Lalji was responsible for arranging camp facilities for almost 40,000 people and with a lot of effort and hard work, he fulfilled his responsibility very well.

In 1948, when the Imam returned, again the responsibility for daily food arrangements for over 2,000 upcountry guests was given to him. Food expenses were given by Juma Lalji personally and other donors. The Gham Darkhana jamatkhana community center decoration work also given to him and he completed that work very well and in less than the budget. For his service, he was awarded a diamond ring and silk suit.

In 1950, he started building construction under the name “Juma Lalji and Company”.

Between 1948 to 1957, this was rationing in Tanganyika and he was responsible for arranging for good quality goods for the Welfare Society. And always did that under budget!

If one happy then all happy and one sad then all sad.
— Juma Lalji

He brought his sister's son and daughter from India and paid for their weddings in Dar es Salaam. He also built a large bungalow in Upanga for his family.