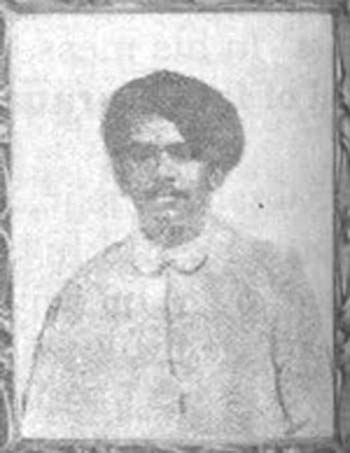 Kara Ruda came from the village of Shishang in Saurashtra, India, but there are also reports that show Kara Ruda’s birthplace to be in Mengani, Virpur or Lodika in 1881. He however spent many years in Rajkot, where acquired his education.

His name was Kader Ali, and he became known as Karabhai. When the people found him compelling in religious beliefs, they called him Kara Ruda (Kara, the true), making him known as Kara Ruda, or Bhagat Karabhai.

Kara Ruda took his admission in the Alfred College soon after his matriculation, where Mahatma Gandhi (1869-1948) also received education. He studied upto Intermediate level. Besides English and Gujrati, he could recite Sanskrit verses fluently. He took enough knowledge on Ismailism and mastered the ginans.

Kara Ruda joined the Police Department of Rajkot Agency in 1902. He was an outspoken and would never accept bribes. He was promoted from Superintendent to the Commissioner, and he became famous as the most ethical officer in the whole of Saurashtra.

Kara Ruda was the most loyal, truthful and ethical officer. No one could corrupt to bribe him. Once a rich man dared to offer him hundreds of thousands rupees as bribe in a big case of the Agency Fund. On hearing his offer, Kara Ruda casting an eye of hatred, annoyingly said, “The lion would never eat grass even if he was starving.” The briber said, “Why are you rejecting such a big amount? You will never find anybody offering such a huge amount.” To this, he said, “Many will be found making such offers, but none like me to reject it.”

Being a responsible police authority, he had to go to different places on duty, and thereby seized the opportunity to propagate Ismailism. A faithful practicing individual always desires to lead a peaceful life, such was not the case for Kara Ruda. How could a job in police department and prayers be coordinated? He decided to leave the police department. The Political Agent suggested him that he was free to execute his preaching works, and could devote his spare time for the Agency's work; since it was their pride to have him in their department. He however kept on insisting and finally his resignation was accepted. He was also awarded testimonials of his honesty and best performances.

He worked in the police department for 12 years and retired with honour in 1914.

In 1922, Kara Ruda was elected a member for Rajkot in the Provincial Committee of Mission for Kathiawar of Recreation Club Institute with Itmadi Ghulam Hussain Varas Kassim as its President.

He was also appointed the minister of the Education Department of the Recreation Club Institute on September 30, 1923.