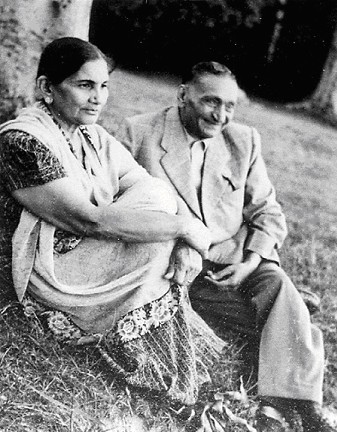 Arising from the effects of drought and famine in Kathiawar, there was high migration from rural to urban areas. One of Mohamedally's uncles had already migrated and settled in the vast city of Bombay. When barely in his teens, Mohamedally left his village and moved to Bombay to join his uncle in search of a job to better his life.

So many people were continuously flooding into Bombay causing the jobs to become scarce. Mohamedally learnt, however, that there were opportunities in British East Africa (Kenya was part of it). In 1897, the British began to build a railway line from Mombasa to Lake Victoria to open up the hinterland for trade and administration. A great number of Indian indentured labourers, eventually numbering about 32,000, were recruited to build the line. The work started in Mombasa and soon, the small Swahili port became a bustling town. Mohamedally's cousin, Javer Kassam, had already migrated there and ran a small shop.

In 1899, the railway reached the swampy area which the Maasai called ‘the place of cool waters', or Nairobi, and a town was beginning to develop. At the same time, Asian traders, having established themselves on the East African coast, were following the rail line and penetrating deeper into the hinterland. It was those intrepid pioneers who introduced the exchange economy as the British administrators raised the flag of the Empire and established small administrative centers or bomas.

The Asian traders set up small shops, known everywhere as Dukas (from the Indian word dukan). The first shops were no more than tents, sheets of canvas propped up on poles. They were soon replaced by thatched huts, and later by corrugated iron-sheet buildings, with the shop in front and living quarters at the back. As Sir Winston Churchill wrote: “It is the Indian trader, who, penetrating and maintaining himself in all sorts of places in which no white man could earn a living, has more than anyone else developed the early beginning of trade (in East Africa) and opened up the first slender means of communication.” Such were the humble beginnings of every town in the hinterland.

The most enterprising of the Asian entrepreneurs was a Khoja Ismaili by the name Seth Alidina Visram. By the turn of the century, Visram had established a chain of Dukas stretching from the Coast to the Nile. There was a great demand for young and adventurous fellow Ismailis to steward the shops. Seeing this opportunity, Javer sent a message to his young cousin Mohamedally, telling him: to ‘Come to Africa. I shall help you find a job.'

Mohamedally's initial intention was to stay in Bombay to find a job. However, when his cousin called him to Africa, he departed without informing his parents. His parents were, therefore, worried and his mother fasted for one month wondering where her son was. Finally, word arrived from Visram that their son Mohamedally was in Kenya with him.

Just at the turn of the century, young Mohamedally boarded a dhow from India and docked at the old harbour in Mombasa. With Javer's help, he got a job with Alidina Visram. The firm sent him to run a shop in the newly established administrative center of Nyeri in Central Kenya. It lay in the heart of Kikuyu country, in a valley nestling between the ranges of the Aberdares and Mount Kenya. He arrived there after journeying several days from Nairobi through Naivasha over the Aberdares, with the porters who had carried his trading goods. They walked along footpaths and animal trails, covering about ten miles per day, resting each night in a forest clearing. He was to make the journey on foot dozens of times over the years until the advent of motor vehicles and roads. His first customers were Kikuyu farmers living around the new boma. As he got to know the surroundings, he made trips farther afield and traded with the Wandorobo hunters inhabiting the dense forests of the Aberdares.

Barter remained the predominant form of trade at the time, although the Indian rupee was already officially in circulation. He bartered beads, salt, sugar, amerikani (cotton cloth) and blankets with the Wandorobo hunters, for ivory, rhino horn, hides, and skins in exchange. He then transported these goods to Nairobi himself by portage and returned with a replenished stock of trading goods. So successful was the barter trade that he soon employed about a hundred porters, each carrying the standard load of 18.16kgs of merchandise. (Strict rules already regulated the maximum weights porters could carry, and the wages they were to be paid.)

After Mohamedally had been in Nyeri for several years, Seth Alidina Visram died. His now expansive business empire (he was known as the ‘uncrowned King of Uganda') was inherited by his son Abdulrasul, but it soon began to crumble. Mohamedally joined forces with a fellow Indian, Osman Allu, who had managed a shop in neighbouring Fort Hall (Murang'a), and they bought up the Nyeri shop in partnership. It then operated under the name of Osman Allu.

In the meantime, European settlement increased in that area by leaps and bounds. Mohamedally and his partner Osman gave up barter with the indigenous people and now turned to satisfy the needs of these new settlers. Their profit margins in those days remained infinitesimal. For instance, when they sold sugar scoopful by scoopful out of a sack, the empty sack was the profit. Slowly, however, they made a success of the business. They extended the shop-cum-house and built a mill for grinding maize on the Chania River where it flows to Nyeri. Mohamedally acquired several properties of his own in the growing township and in neighbouring Karatina too.

The partnership continued to prosper. Mohamedally had a flair for business and looked after the customers, while Osman Allu superintended the transport - at first ox teams and wagons – and later the mill. A setback came in the 1920s when the settlers plotted rebellion and threatened not only to overthrow the colonial administration but to `drive all Indians into the sea'. The partners took the precaution of sending their families temporarily to India, while they kept the business going with the help of loyal employees.

In 1930, they dissolved the partnership and went their separate ways. Each established a business under his own name. Mohamedally proceeded to become one of Nyeri's most prominent Asian merchants. He was a member of the Town Council, which later named a street, where he had a ‘shamba' property, after him. (The ‘Rattansi Street' sign, however, has vanished over the years and has not been replaced.)

THE RATTANSI EDUCATIONAL TRUST is his legacy.

The Mohamedally and Maniben Rattansi Education Trust, was established in 1956 as a result of the philanthropic thoughts of Mr. Mohamedally and his wife Maniben who strongly believed in social justice and the centrality of education in the advancement of individuals. Their vision is that “Education Lights the path to development” and the main aim of the Trust is getting Kenyans out of poverty. The Trust offers bursaries to students from poor families.