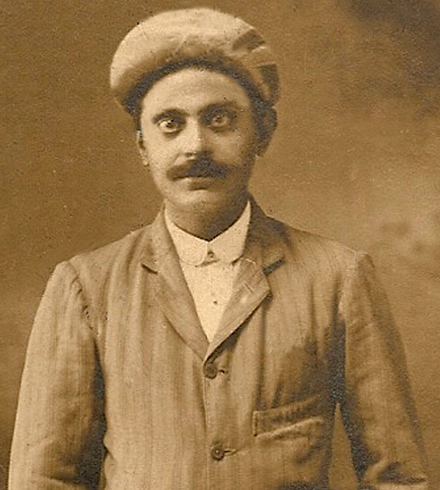 The Adat Dewji’s family was from Bharapur, Kutch and first settled in Zanzibar. They appear to have then done business in Tanga, Bagamoyo and finally Dar es Salaam. During this time, they went back and forth from India to Tanganyika for family as well as for setting up business relationships. Rashid bhai was born in Tanga in c.1890

At an early age, he joined his older brother Habib Adat Dewji in business in Tanga. The Dewji’s had business relationships with the well-known Somji Khakhuani family, often partnering in specific projects, mainly to do with import and export. Later, the Adat brothers moved to Bagamoyo, which was the German capital and then moved again to the new German capital of Dares salaam during the War. Around 1911, Rashid Bhai married Sikina Virjee and then set up his own wholesale import business in Dar es Salaam called A N R Dewji & Sons (named after his two sons Abdulhussein and Nurmamed). The business dealt in piece goods. During this time, he also travelled to Mumbai a few times, setting up suppliers for his import business.

In 1911, Rashid Bhai left Tanganyika to settle in Mumbai with his wife and now three children. He left a manager to look after the businesses in Dar es Salaam and established himself in Mumbai, with the financial support of his brother Habib Bhai, importing textiles. In Mumbai, they lived in a rented spacious property in Khadak whilst his office (Pedhi) was on Samuel Street in Dongri near Mumbai’s Darkhana Jamat Khana. At that time, the area around Samuel Street was dubbed as “Khoja Mohalla” due to the large number of Khoja homes and business as well as the jamat khana situated there. Dongri was in proximity of the harbour and railway depots and thus favoured for importing/exporting businesses.

Rashid Bhai lost his wife, Sikinabai in 1918 when he already had five children and so in 1920, he married Zerakhanu, daughter of Lutufali Nazarali of Thane, Mumbai.

Later in 1920, he accepted a proposal for the marriage of his oldest daughter Mariamkhanu to Ismail Jaffer Somji of Tanga thus sealing the relationship of these two old families as it seems Somjis and Dewjis had links with a common ancestor four or so generations earlier. In addition, Ismail J Somji’s mother and Mariamkhanu’s mother, Sikinabai were sisters.

After her wedding, Mariamkhanu left Mumbai to live with her husband to Tanganyika. Rashidbhai travelled to Tanganyika to check his flourishing businesses in Dar es Salaam and to visit his brother Habib Bhai. On the return voyage his daughter Mariamkhanu also travelled back home with him to Mumbai, for a visit as was traditional a few months after marriage.   His son, Abdulhussein was now involved in the family business in Mumbai.

In September 1934, Rashid Bhai decided to return to Dar es Salaam with his wife Zerakhanu and now his six children to live. There were domestic issues and it was felt best for all concerned if Abdulhussein was left in charge of the established business in Mumbai and Rashid Bhai and family would therefore deal with the Tanganyika side.

In Dar es Salaam Rashid Bhai continued making progress in his store, A N R Dewji, which imported goods from India and Europe. He also continued to work in partnership with his brother, Habib Bhai. His son Nurmamed also started working in the store. In 1935, and his wife, Zerakhanu gave birth to their daughter Hamida.

Among the talents he had, Rashid Bhai was knowledgable about assessing diamonds although this was not a business but a hobby. He did not buy or sell diamonds but he had gained a trusted reputation so that he would advise and help people purchasing them. They would visit him with their samples and he would confirm their value and quality. The family have a story that Mowlana Sultan Mohammed Shah had asked to meet Rashid Bhai to assess some diamonds for him in Mumbai. The family still have the jewellery balance scale he used in those years.

Over the years he had been in Tanganyika, Rashid Bhai also helped new immigrants from India by providing them with support and advice on how to commence and establish businesses.

On a fateful day, 11th April 1938, Dar es Salaam Mukhi, Zaver Karsan received a telegram from Mumbai which requested that Rashid Bhai should be notified that his son Abdulhussein had passed away of heart failure. This method of notification was chosen in order to break the news to the family in a sensitive manner.

Mukhisaheb came to the store, and notified Rashid Bhai. Everyone was distraught especially Zerakhanu who needed medical attention. The ziarat for Abdulhussein was arranged for the following morning as was the tradition then.

On 12th April 1938, on his way to the jamatkhana for the ziarat with other members of the family, Rashid Bhai collapsed on the stairs. A doctor was summoned but Rashid Bhai had suffered a fatal heart attack. His burial took place that same afternoon. The ziarat for father (age 48) and son (age 27) took place the next day.

His son Nurmamed was 22 years old and Kurban was 16. There were 5 other children, who were all minors.