Alibhai Gulamhusien Jiwani lost his father in India when he was quite young, and he and his two brothers were raised by their mother Saambai, making and selling daria until her children were called over to Ikizu, Tanganyika by Saambai's brother.

Alibhai worked with his uncle until he started another store with his brother. Eventually, they called over their mother to Ikuzi in 1946.

Alibhai was married during the Diamond Jubilee celebration of the Imam when many couples were married off to strangers!.The sagai and marriage the was very next day, August 9th, took place in 1946 after the arranged marriage was fixed. Alibhai had not seen his bride until the wedding night.

It took place in a hall. As their names were called out they approached the Imam who took their hands, joined them, patted their shoulders and blessed them. In lieu of a gold chain own gold chain he paid 51/= for which he was loaned one and which Dolatkhanu draped over the Imam's neck. In Ikizu, Alibahi and his new bride lived with his mother, brother and sister in law.

In 1946, the Imam made firman encouraging young members in the jamat to learn and become missionaries. Thus, a thought was planted in Alibhai's head. In 1948, he thought of going to Pakistan to get missionary training. That did not pan out so he obtained books from missionary Abuali Alibhai in Dar es Salaam. He diligently studied these books at home over many years. In the the mid-50s, he delivered his first waez in Musoma. Later, in Mtwara, he also often addressed Sunni Muslims at Milad-e-Nabi celebrations - for which he was nicknamed Bwana Mwalimu. 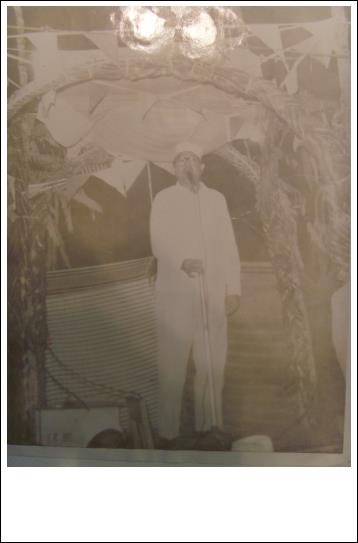 His brother Ismail moved to Musoma for the schooling of his children and, in 1954, the Jiwanis too moved to Musoma so that first son Firoz and later Zul, would be able to attend public school. In the mid 1950s Alibhai travelled to Mtwara to have his nose/sinus problems checked at Ndanda Hospital and also to see Dolat's previous hometowns. He was given a report recommending surgery in Dar es Salaam. There he was operated on by Dr Joseph (who was known as Dolat's brother's Nazerali's doctor as the two were great friends). It was during this trip that he filled out an application form for new vacant lots in Mtwara.

Travel, it turned out, was beneficial for Alibhai. No asthma while on the road! And so, he enjoyed travelling!

The new Imam's coronation venue was in Kampala. It being the nearest of the venues to Musoma (but still a good 600 kilometres by road – and roads of East Africa at that - mostly dirt roads), the Jiwanis went there - in Karmali Ismail’s (Diamond's father) lorry!

Alibhai sent an arijo to the Imam about his asthma. For all the years they had lived in Musoma he had not had a good night's sleep because of it . He would sweat profusely and could not lie down in bed. He would sit on the floor near a chair on which Dolat would have a pillow so that if his head dropped down from exhaustion it would cushion him! A reply came within two weeks. The imam advised him to move to the coast, Mtwara in Tanganyika or Mombasa in Kenya. And so, on January 15th, 1959, Alibhai, Dolat and their three sons left Musoma for Mtwara where Alibhai on a previous trip had applied for a plot of land on a new street plan in town and it was his to purchase.

His wife's brother Badru bought the Alibhai's business, moving out of the South – Alibhai’s brother Samji moving to Arusha and the younger brother Ismail remaining in Musoma. Shortly thereafter, Dolats brother Habib moved out from the small village of Nanyamba and with his brother’s Badru's assistance took over his previous shop in the town of Majita. That’s how relations worked back then!!!

1959: Relocation journey from Musoma to Mtwara

This would prove to be an adventure! And, over-riding everything was Alibhai's desire to go to Aswan, Egypt for Imam;s burial. Time was running out and the journey had to be done precisely for there was only a weekly boat from Musoma to Mwanza, the rail head, a two-day train journey to Dar es Salaam and only a two-weekly boat from Dar to Mtwara from where Alibhai would have to board ship – right upon arrival – to go to Aswan!

They boarded a tayari boat at Musoma for an overnight journey to Musoma. They did not have a ticket but were able to buy one on board. There was only open deck space unless you paid the crew in a cabin to give up their beds. But there was only one of four beds in one of the cabins that was available (the other three already taken by native women). So Dolat and her brood of Firoz, Zul and Rifat slept in the one bed, while Alibhai said he would find a place to sleep. After settling down, she went looking for husband Alibhai and found him sound asleep in a motor car in the cargo area!

Alibhai missed his steamer to Egypt and so had a fortnight's wait for the next one. He began looking for an alternative place since the Nagji place was not going to be ready anytime soon. There was one that was being vacated and so he took it. He called his family over, They arrived one morning and in the same afternoon he hopped on his ship to Aswan! But not before giving instructions to Dolat for the making of berez and showcases for their retail store. He would be gone for two months, including a stop in Mombasa on the return journey to purchase maal.

Their next door neighbour was Nurmohamed Saju. They were good neighbours, often Dolat and Mrs Saju would chat across the low dividing wall in the lawani and share samples of each other's cooking. 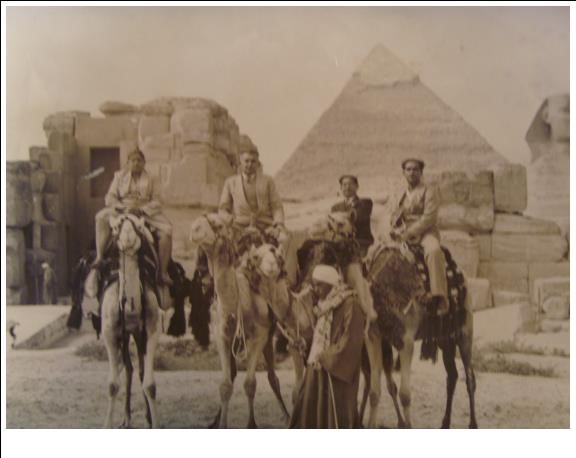 Upon Alibhai's return from Egypt, plans began for construction on the plot of land he had bought in town, opposite the STC (State Trading Corporation) which was in operation during the Portuguese Mozambique war. This was a big corner lot, much bigger than their needs. They built initially a single storey building on a 1/4 of the plot. They decided to leave another 1/4 of the lot vacant for the children when they grew up and to sell the remaining 1/2. Nephew Tajdin Hirji in Nanyamba was looking for a place in Mtwara for his children to stay for their future schooling there. They sold the 1/2 lot to him, with the plan being for a common stairs leading to future upper floors of both families. They moved into the ground floor in 1961 and some years later they began construction of the upper floor which would take a few years.

Their business was called Jubilee Stores. Initially they sold kapad and – tires! But later they switched to selling ushanga and other imitation jewelry because of better margins. 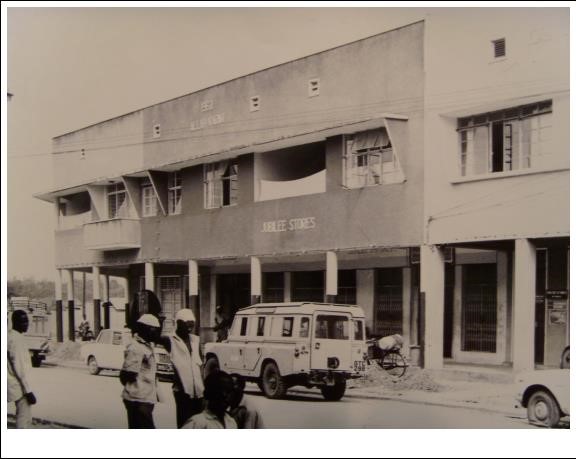 Mtwara had an Ismaili population of 150 at the time of their arrival, 400 when they left two decades later. The jamat khana was at the other end of their street row One of the first friends Alibhai made with was Hassanali N. Walji, a missionary too, a friendship that continued to Toronto decades later. Alibhai continued giving waez not only in Mtwara but also in small towns in the interior and once even in the capital Dar es Salaam.

Alibhai's asthma subsided in Mtwara but flared up again 3 years later. So again, they sent a second arijo to the Imam, on March 3, 1961. A reply arrived April 19, 1961. It said there no quick remedy at present but improvement will come in 5-6 years. Dolat made note of this future time. During their time in Mtwara, they were repeatedly appointed to various community postions Twenty-five years after their first sewa, The Imam bestowed on them the title of Rai during his Silver Jubilee celebrations in Toronto!

Alibhai's trip to the Congo

They received a letter from his brother Ismail in Mwanza, with whom they were still partners in business. His son had received admission for further studies in teaching. To help pay for it, he suggested Alibhai move to the Congo where it was said there was lots of money to be made. Alibhai - ever keen to travel! - discussed it with Dolat who was not too keen to move again. She suggested he first go there and check things out. She also remarked that since it appeared that much of the business there was in the black market would he know how to lie? She knew Alibhai was too honest for that kind of business. She recalled, for instance, someone at one time had wanted to buy something but they only had very old stock and Alibhai had told him aa maal padelo chhe (this is old stock). He went to the Congo, returned and was all set to move the family there. On the Imam;s advice, they did not move to the Congo.

As part of its socialism policy, the government nationalized banks, industry, etc and – rental properties. Alibhai lost his land and building, including the 1/2 lot he had sold to Tajdin Hirji which was not yet legally transferred over and in the meantime, he had rented out his building. Thus, all of a sudden, they went from being landlord to tenant!

Once while they were in Arusha, they discovered that ushanga supplies there were much better priced than in Dar es Salaam from where they normally obtained it. They observed that the local Maasai tribe in particular really loved to wear them, hence the big demand and lower price. After this, they obtained their ushanga supply from Arusha.

Alibhai's Illness: During one of his regular chest x-rays for asthma the doctor noticed a spot on his liver. To learn more, a biopsy was done. It was found to be malignant. Though very serious, Alibhai fortunately did not experience pain nor discomfort. One evening, after having visited Zul's house which he had recently moved into, they prepared to leave for jamat khana. Zul stepped out of the car to go get them. Just then, Alibhai groaned Tuti gyu (it broke) and showed Dolat - an upper arm, limp with bone in two pieces! Zul immediately shouted for an ambulance to be called. At the hospital, his arm was set and put in a cast and they went home. Next day as he stepped out to go see the family doctor for a follow-up, he groaned again Pachhu tuti gyu (it broke again) – this time it was the shoulder blade. Back again in the hospital, this time the doctor said he could not go home, it being quite possible that next perhaps his backbone could snap. And so he stayed in hospital to the very end – Nov 1998 - never again to go back home.

Alibhai alert at the end: The doctor gave a long briefing to hi son about Alibhai's condition. In particular, he said that Alibhai was remarkable. Ordinarily, with the disease having spread so extensively he ought to be in a coma but not only was he conscious he he recognized and addressed the doctor till the end.