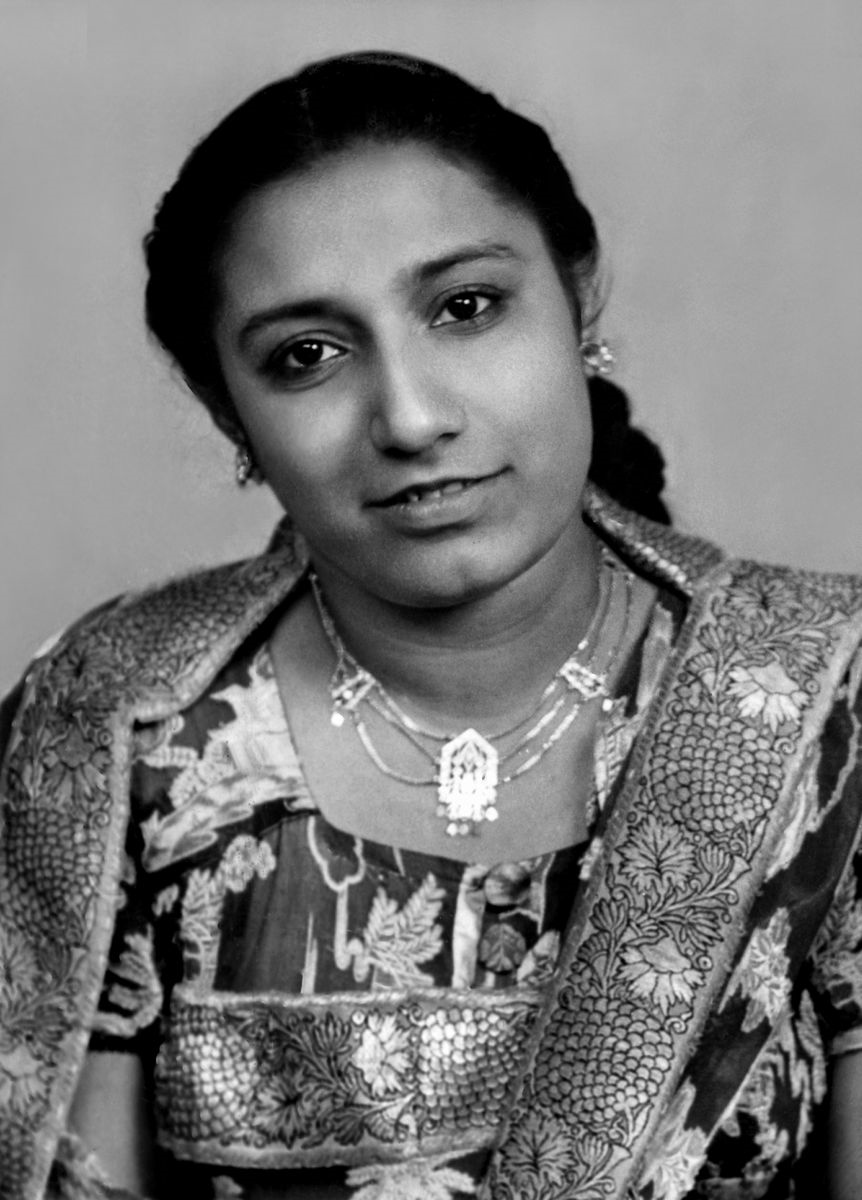 Gulsaker Hussein Jaffer Bhimji was born in 1925 in Karachi into a small dry fish trading/exporting middle-class family. As was Khoja custom, she was given only the very basic education in Sindhi but that changed when her father, who exported dry fish to Colombo, decided to move there to start a new business. In Colombo, the family was quite successful and her father enrolled Gulsaker and her younger sister, Malek Ajani in English education. She remembers a big luxury car and vacations in Kandy, a hill station.

But as was to happen many times in her long life, naseeb fate worked against her, when in April 1942, the Japanese airforce bombed Ceylon, causing many civilian deaths. British Indians were in the greatest danger and her family had to flee to Karachi, leaving everything including shops, homes, and cars.

In Karachi, however, Gulsaker forced her father to allow her to continue her education and she was enrolled in the Sindh Midwifery program, where she was, in 1943, one of the very few Khoja women to graduate. She started working at a maternity home under the supervision of Dr. Navroji, a Parsi lady.

From 1943 to 1946, Gulsaker had a thriving midwifery career in a very multi-ethnic colonial Karachi, delivering children of wealthy Karachites in their homes. When the babies arrived safely, the parents used to gift her gold chains, etc. A picture of her life at the time shows a beautiful woman in full salwar khamiz with a bicycle.

In March 1946, a trip to the Diamond Jubilee of the Agakhan lll in Bombay was seen by her father as an opportunity to find a suitable marriage match and in fact, hundreds of Khoja Ismaili women were hurriedly married in the presence of the Imam to secure his special blessings. Gulsaker (who was 21) and the rest of the family were not aware of her father’s plans and when he announced that he had arranged her marriage to Ismail Mohamed Dewji, a man 25 years older than her, who already had 4 children, the eldest of whom was just 4 years younger to her, her entire family became very emotional but her traditional father refused to take back the vachan word he had given to Ismail’s mother.

Within days, on 13th March 1946, she was married at the Khadak Jamatkhana, Bombay by officer-in-charge, Mr. Jamal Lalji. There was no ceremony, no honeymoon and in a short few days, her entire family left for Karachi, leaving a crying Gulsaker in a strange new city. Such was the fate of Khoja women in those days.

Bombay was devastating for Gulsaker. Even though her husband’s family needed the money, she was not allowed to work in the pre-independence turmoil. She lived in a one-room apartment in Dongri, with her husband, his four adult children, and the mother-in-law. Within a few years, she had the first of her own four children. Quite unhappy, she made frequent visits to Karachi - four trips between 1954 and 1956.

In 1956, her husband and his family were finally permitted to return to Tanzania but once again, luck was not in her favor. Her orthodox mother-in-law did not allow her to work as a midwife, even though she was offered a good, secure job by her sister-in-law,Jenabai Harji Bhanji, who owned the Jenabai Maternity Home in Dar es Salaam. So Gulsaker had to resort to cooking samosas, which her eldest son would sell to the various Dar es Salaam traders shops for their morning nasto snack. Life was rough and it did not help that she had another three children in succession.

But Gulsaker became an expert in "large orders”, making up to several thousand samosas for the numerous community "fetes” in Dares Salaam. Later, she started to make children clothing, which she would deliver to the retail stores in Kariakoo, a 40-minute walk in the sun either way. One of her customers was Sakar Jessani, who became her good friend later in life in Calgary. But she was not to be deterred and made modest success. By 1971, she even managed to buy herself a flat in the Ismaili Co-op housing, Garden Flats in Kisutu.

But fate was not done with her - as the Khojas say, her kasoti trial was not over. Shortly after she got possession of the flat, the government of Tanzania nationalized buildings and in a racist move, including the coop schemes of the poor Asians. ((See Dar es Salaam) This was a very severe blow to Gulsaker, who considered going to the State House to protest to the President. But Tanzania was a one-party state and the police were most corrupt. Being a poor Asian was worse as you could not afford to bribe your way out.

But this time, Gulsaker decided to take fate in her own hands – she resolved to leave Tanzania to join her brother,Mirza Jaffer in Canada. But the first step was to go to her step-daughter in Barcelona, Spain. Her immediate family was opposed to her plan but Gulsaker was determined. So alone, not speaking any Spanish nor enough English and with very little money, but with the assurance of having family in Spain and her own courage, she moved to Barcelona and once her family joined her, she even bought a small café-bar, called Bar Simba. No one in her family spoke Spanish nor did they did know how to use the local currency (called paseta). In fact, no one knew anything about running a bar but like generations of Khojas before her, she was driven to survive.

Within the next 12 months, her eldest son immigrated to Canada and she was able to move to Toronto with her husband and three children. But, as most immigrants to Canada know, it is not simple to succeed here. Her husband was too old to get a job and her children had to catch up with their lost education. So once again, it was necessary for Gulsaker to work. The easiest job for someone who spoke a little English but had no formal education was as a housekeeper in a hotel. So her son rented a car and they went to all the hotels in Toronto and left her application. Almost immediately, she was hired at the 5-star Royal York Hotel, in downtown Toronto.

Gulsaker used to say that she spent the best years of her life at the Royal York. She was independent, she was able to work in a job she liked and was treated with respect. She was a hard worker and made many friends from different nationalities that worked there. And once again, she started getting appreciation gifts, this time from grateful hotel guests. She was the principal bread-winner for her family for many years and at the same time, she was running a home for her elderly husband and growing children.

When the children decided to move to Calgary, she followed and worked for the Sandman Inn, Calgary. She also worked at Via Rail, where she became a very good friend and confidant of a young girl from Africa called Karen. Later, when Gulsaker fell ill with cancer, Karen nursed her to recovery.

Gulsaker always spoke her mind fearlessly - once, at the Kirby Seniors Centre, Calgary, she became a mini-celebrity, when she told a TV interviewer that she hoped always to live alone as she did not want to be mothaj depended on her children.

Later, she moved to Toronto and chose to live by herself at the Sunrise Seniors Building on Victoria Park, until her long hardship-driven life journey came to an end in 1997.

Gulsaker was surrounded by all her children who sang ginans, hymns to her, as she passed away.

Struggle is the meaning of life ...
— Agakhan III