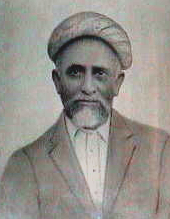 "Mamu Dewa" was a well-known Khoja Ismaili missionary (preacher) from Sadani and Bagamoyo in German Tanganyika.

At a very young age, Mohamed lost his father to illness and his mother had to remarry to sustain her family. It is said that his new father beat him regularly and so, in order to protect himself from the early morning cool winds off the Indian Ocean, little Mamu got into the habit of sleeping in shallow recently-dug graves in the beach-side cemetery. On the superstitious Swahili coast, it was a common belief that evil that lurks in all cemeteries and Mamu acquired a reputation as being fearless.

He grew up to be a tailor in Sadani but later ended up quite wealthy, owning a fleet of transport trucks in then German capital of Dar es Salaam. However, during the 1914-1916 European War, the trucks were commandeered by the German authorities in exchange for German IOUs but the victorious British colonial army then seized Indian goods and rolling stock as "enemy property" and failed their Indian British subjects, by not honouring the I.O.U's or paying for the trucks.

"The first World War led to great business difficulties in East Africa. W. H. King, who fought here with the Indian Expeditionary Force from 1915 to 1918. used to say that the whole natural line of business communication between Tanga and Mombasa, Arusha and Nairobi, Kisumu and its southwestern hinterland was broken up. He described the sufferings of the Indian duka keepers who were merrily raided by both sides as the battle ebbed and flowed. The Belgians coming in from the Congo into Rwanda and Burundi and then crossing the Lake to push towards Tabora treated the Indian traders in the same way as they advanced and the Germans retreated" [1]

During the war, the British plotted the collapse of the German rupee by circulating forged currency notes. Upon their victory, they demonetized the German currency as well as the widely-used Indian rupee.[2]

As a result, Mamu Dewa's family and many Khoja (and other Indian) merchants in Tanganyika became impoverished, to the benefit of Kenyan and British companies who were given lines of credit by the Banks to buy up businesses in Tanganyika.

Mamu Dewa was a respected self-learned man and it is reported that during his lifetimes, he did four hajj to the holy city of Mecca. On the coast, he came to be known as a 'Maalim' or faith healer.

He died peacefully in 1916, having predicted to Doctor Lenz, the German physician attending him that he would be dead before the physician returned to his house.

As this is what came to pass, Mamu Dewa acquired an even bigger reputation after his death.