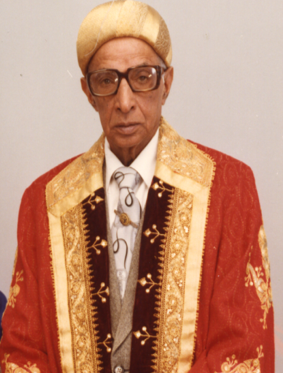 Gulamhussien Bhai was born in Kera, Kutch where his father owned dhows, which sailed to Mumbai.

At the age 13, he and a number of his cousins took some money from the family till and stowed away to Mumbai. There they paid for and sailed in a steamber steamship to Mombasa and thence by rail to Kampala.

In those days, young Indians arriving in East Africa easily got jobs with the many ration stores owned by the pioneering entrepreneur Alidina Visram or Haji Adam, a Sunni Memom trader. After some time, the cousins started their own store where they slept upstairs.

In 19XX, he married Nurbanu, daughter of Khamisa Devraj and started a family. However, Gulamhussein Bhai was offered a good job as a supervisor for new cotton ginnery in Mapiji for the family enterprise of Jamal Walji, a Khoja Ithnasheri. His job was to buy and weigh the “kapasi” cotton fiber. But his heart was in Kampala and he asked for a transfer back to his employers ration store. By then he had 4 children.

And so, he decided to go into business for himself by starting a produce traders store near the market under the name of MK Bhimani, He was very successful as he was known to be very honest. The upcountry suppliers used to say “Bhimani weighs with his arms open” meaning that he did not cheat. Every morning, there would 15 lorries lined up waiting for him to open his store and when his competition told the up country traders that Bhimani was a Seth, lord who did not care for their business, they would reply that he was worth the wait.

Gulamhussein Bhai had 9 children and he was most proud that he could store a whole months rations at home for them. Every saturday morning, he would go to the market to stock up for the week. If he received country fresh eggs or vegetables from his kapasi suppliers, he would share them with his neighbors without accepting money.

He did not like debt-he motto was “karaji, na sume raat na di” a debtor sleeps neither day not night.

During 1957-58, his business suffered a major setback, there was a serious shortage of income and the elder children had to leave school to take up employment.

Gulamhussein Bhai re-started with a smaller store under a new name Karsaji Store and was soon making progress. In fact, by 1960, he was able to build his own house and in 1957, he even bought a Chevrolet car that had been used by the Imam, Agakhan lll during this visit to Kampala. The plate was KA 1330!

Because of the Uganda Exodus in 1972, when all Asians were expelled by the Dictator, Adi Amin Dada, Gulamhussein bhai ended up in the UK, where one of his sons had settled and then moved to Canada where the rest of his family lived.

He died peacefully in Toronto.