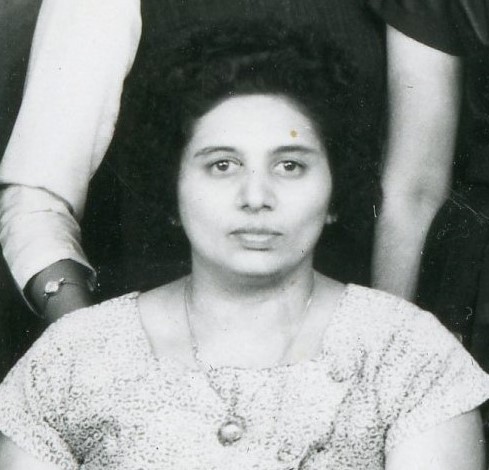 If there is one person who merits a special recognition, it is Sherbanu Bai, whom we call Bai. She is the mother of all. Bai was born in Kisumu on August 13, 1927. She was the second daughter of the eleven children of Hassam Mohamed Dhanji and Khatija Velsi, my nanabapa and nanima.

She lived in Kisumu until she got married in 1952 at the age of 25. Mummy was her maid of honor. Bai’s childhood was a happy one. She and Mummy were close to each other since they were less than two years apart. They were always together and often dressed alike. They went everywhere with their two younger brothers, Badrumama and Sultanmama. They travelled a lot with Bapa and family around Kenya and uganda. As she got older, Bai enjoyed cooking and spent a lot of time helping in the kitchen. With all that practice, she became an excellent cook and carried on that talent up to this day. She makes the same delicious churmana ladoo as Maa did in Kisumu.

After her wedding, she moved to Kampala with her husband Shamshudin Jaffer. They lived there for five years. There they had two sons, Azim born in 1954 and Moez in 1955. In 1956, Nimira, their only daughter, was born in Kisumu at Maa’s house, as per our tradition. Soon after, they moved to Bujumbura in Congo where they established a retail general store. Children went to French schools there. Their fourth child Karim was born in November 1963. Badrumama and Sultanmama lived there also. Bai helped out in the store.

From there, once again they moved to a small town called Boma in Congo. Here they opened a bakery. Although it was a small town, there was an Ismaili community present. So, they did not feel completely isolated. Bai worked very hard at the bakery. Children helped when they could. Bai did a lot of the baking and Shamshubhai delivered it to different stores as far as Kinshasa. Flour was rationed and consequently, there were long queues to buy it when it was available.

At the end of 1969, like a lot of East African countries, the political situation in Congo deteriorated. Since all of Bai’s family had British passports, they were ordered to leave the country in 24 hours. They were faced with a dilemma. Living in a tropical country, they had no warm clothes, they did not have enough money to buy six airplane tickets, and they had nowhere to stay in London. After negotiating with the authorities, they were given three months to prepare for their departure. During that period, they made some money, bought their tickets, some extra clothes, suitcases, and contacted somebody they knew in London to pick them up from the airport and book them in a hotel in London until they found a place to live. They arrived in London in 1969. Bai was 42 years old. The children, Azim was 15, Moez 14, Nimira 13, and Karim 6. I would just like to stop here and take a moment to reflect. You are arriving in a foreign country, with no warm clothes, little money, four children who need to go to school, and you need to find a place to stay. A huge undertaking.

Luckily, our Ismaili community was well established in London. The family that Bai and Shamshubhai knew, had booked them in a hotel near the JK. One evening, at the JK somebody suggested to them to contact the government council for assistance which they did. The council got them lodgings at a low cost. The kids enrolled in English schools which was very challenging for them since all their education in Congo was in French. I remember visiting London at one time and going to JK. After the religious ceremonies, I went downstairs and was shocked to see a lady who looked just like mom, it was Bai with her four children, my cousins. She immediately hugged me. She told me that she had just arrived from Congo and invited me to her apartment which was not far from the JK. I visited them often after that encounter. Bai was a piece of Mummy to me. She was kind, generous, resilient, and hardworking. Her house was my home away from home.

Life was not easy for them in London. Financially, they struggled having lost all their assets in Congo. Bai got a job to make ends meet, but her salary of eight pounds per week was insufficient. So, she took on several other jobs of catering, sewing, and worked from home. In 1971 and 1972, there were a lot of Ismaili students moving to London from Tanzania and Uganda and were looking for places to stay. So, Bai took them in as paying guests. That meant more income but, on the other hand, a lot of housework for Bai.

Life was a struggle. Over time, there was calm after the storm. Children grew up, they all completed their education which was free, luckily. As for Bai, I salute her. Despite all the hardships, she stood strong and determined. She is a generous person with a contagious laugh and a sharp memory.